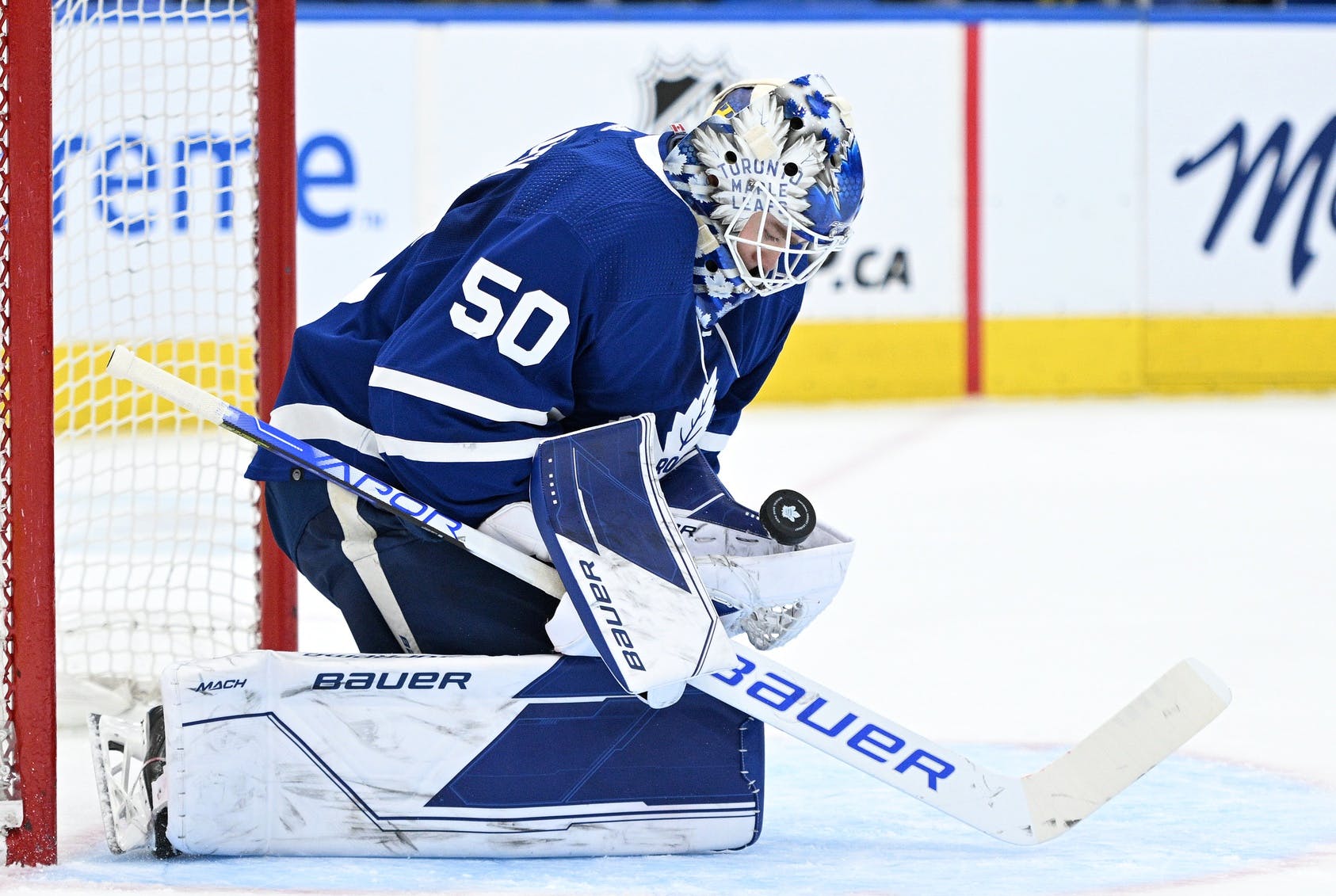 By Michael Mazzei
9 months ago
@Erik Kallgren is now 11 games into his NHL career and to say it has been quite the adventure would be putting it mildly.
When he was called upon to make his NHL debut against the Coyotes on March 10th with his team down big, few could have envisioned the positive impact he would bring to a team that was desperate for some stability in the crease. Surrendering a combined three goals in his first three appearances (including a shutout in his debut start), he made good on the chance he earned through a strong showing with the Marlies this season.
Kallgren wasn’t supposed to take over the crease for good since it’s not often a rookie netminder can maintain strong play through his first stint in the NHL. He was given an extended look because of @Petr Mrazek’s inconsistent play and subsequent injury, and because there aren’t many other options available once @Jack Campbell was cleared to return.
But since his start against the Hurricanes on March 17th, there has only been one appearance where Kallgren posted a save percentage above .900 (April 9th against the Canadiens). Six of those appearances have resulted in a SV% of .870 or lower, and all but one of those games saw him concede at least three goals.
This has been a rough eight-game stretch that has culminated in an uninspiring stat line of 3.70 GAA, a .867 SV%, and a 4-3-1 record. Is Kallgren simply going through a funk or is this who he is?
For every @Jordan Binnington, @Matt Murray, and @Andrew Hammond who made an immediate impact that carried their team to great heights, there are countless other examples of other rookie goalies who take some time to adjust to the NHL level. It is rare for a young netminder to not only find sustained success early on but to also become the de facto starter and run with the role.
It goes without saying that goaltending is the toughest position to properly analyze and making predictions on what can happen is mostly left up to chance. Kallgren is no different in this endeavour, but there have been times when he has come up short in recording an important save.
It may not be a perfect stat for determining a goalie’s value and impact on the game, but “goals saved above expectation percentage” (or GSAx%) is pretty close to it. In his 11 career appearances, Kallgren has a -4.5 GSAx which is 73rd amongst all goalies this season. While his play at 5v5 has been decent with a .910 SV% and -0.26 GSAx, his play shorthanded has negatively impacted his numbers as he has a .830 SV% and a -2.68 GSAx when down a man. Considering that 23% of the goals he’s allowed were when the Leafs were penalized, that major drop-off is pretty striking, especially with the Leafs boasting one of the best PK units in the league.
There is no denying that Kallgren hasn’t been stellar for the Leafs after his first three starts, but given the current circumstances, he is the best option they have right now.
Among the five goalies the Leafs have used this season, his .899 SV% and 3.01 GAA rank third on the depth chart. This has him well ahead of Mrazek and behind only Campbell and @Joseph Woll. We will disregard Campbell since he is the undisputed starter for the Leafs in spite of the recent stretch where his numbers took a hit. Instead, we focus on comparing Kallgren to the other backups that Toronto has used.
Woll did well in his four starts with a .911 SV% and a 2.76 GAA during a point in the season when the Leafs lost their top two options at the time. He is definitely part of the long-term plans after getting a three-year extension but remains ways away from getting a longer look at the NHL level and is currently recovering from a shoulder injury he suffered last month. Mrazek has been shaky all year long, going as far as being placed on waivers on the eve of the trade deadline. Clearing waivers seemed to be a wake-up call as he began to turn a corner but then injured his groin for the third time and won’t be cleared to return until after the first round (should the Leafs get over the hump). As for Hutchinson, he has taken over as the starter for the Marlies who are in the midst of a playoff push. It doesn’t help that he did not light the world on fire in his two appearances with the top club in 2021-22.
Kallgren has not been solid over the past few weeks, there is no question about it. But with so few alternatives for who the Leafs can use as Campbell’s back-up down the stretch, Kallgren is their best choice to man the position at this time.
He earned this opportunity because of a solid showing with the Marlies and proving to be a capable netminder at the NHL level. It is true that Kallgren has a negative GSAx both overall and shorthanded which has negatively impacted his numbers, his calm presence in the crease has been a welcome addition for a team that went through a long stretch of unreliable goaltending. After all, this is the same netminder who helped propel the Vaxjo HC to an SHL championship. So he knows when to turn up his game should he be forced into the net for a critical game.
So while it has been frustrating to see him struggle after a promising start, it is a significant improvement over most of the other options the Leafs have and could be chalked up to growing pains more than who he actually is as a goalie. Kallgren has propelled himself up the goalie depth charts and will remain the backup while Mrazek continues his recovery.
Stats from Hockey-Reference.com and Natural Stat Trick.
More from TheLeafsNation.com
POINTSBET IS LIVE IN ONTARIO