Every Toronto Maple Leafs connection at the 2022 Beijing Olympics 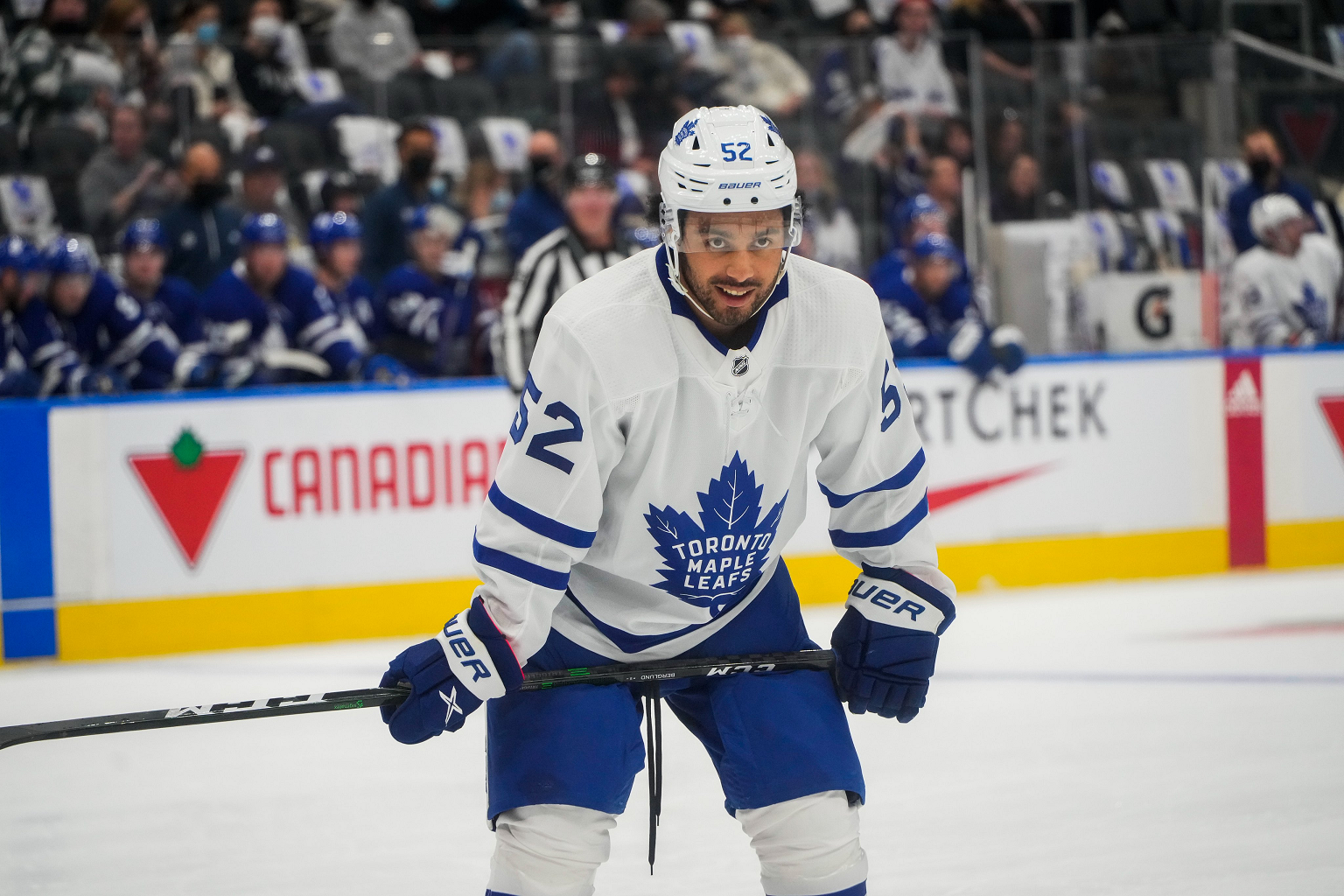 By Kyle Cushman
10 months ago
In an alternate universe, we would be in the midst of a wild week of roster announcements and debate surrounding the NHL’s return to the Olympics. While we still won’t get to see the likes of @Connor McDavid, @Auston Matthews, or @Nathan MacKinnon at the Olympics for now, the upcoming Games still provide a high profile event that sees a lot of familiar names competing for their country.
For the Toronto Maple Leafs, that means a mix of current prospects and former players all heading to China over the next week. For some prospects, it will be their introduction to the fanbase on a grand stage. Then you have the former players, some of which will bring back fond memories of past teams, and others will have you going “oh I remember him!”
To get you set for the men’s tournament that begins on February 9, here is every player with a connection to the Toronto Maple Leafs competing at the 2022 Beijing Olympics.

Easily the most notable group of players attending the Olympics is the group of current Leafs prospects that will be representing their country in China. There will be three “true” Leafs prospects at the Olympics, with an additional two whose NHL rights still belong to Toronto.
Many fans will be excited to get another chance to see 2021 second-round pick Matthew Knies after his World Juniors experience was cut short after just one game. Knies breakout play at the University of Minnesota sees him as one of just two 2021 draft picks on Team USA, along with 2nd overall pick Matty Beniers. He enters the tournament with 23 points in 24 games in his first year in the NCAA.
As the second-youngest player on the roster, it’s unclear where Knies will slot in on the team, but his intriguing combination of size (listed at 6-foot-3) and ability to generate scoring chances from the slot will make him a useful player regardless of where he lines up.
Joining Knies on Team USA is 2019 fourth-round pick Nick Abruzzese, a prospect that most fans are unfamiliar with but could have a major coming-out party in Beijing. Despite not playing a single game last year due to Harvard’s season cancellation and undergoing hip surgery, Abruzzese has not missed a beat in returning to action this season. He has 21 points in 15 games, picking up right where he left off in 2020 when he led the ECAC in scoring. Abruzzese is also one of the older NCAA players on Team USA, which may see him put in an important role out of the gate. He’s one to keep an eye on.
Speaking of prospects to keep close attention to, 2018 sixth-round pick @Pontus Holmberg is the youngest player and lone NHL prospect on Team Sweden. The reigning SHL playoffs MVP and in the midst of a career season in the SHL, Holmberg will likely be a key member of Sweden’s squad if they are to go on a deep run. Holmberg is already signed to an NHL contract by Toronto and could play games for the Leafs as soon as next season. I dove into Holmberg’s rise in more detail in this week’s Prospect Roundup here on The Leafs Nation, he’s one of the best stories in the entire organization.
While not technically Leafs property, I would be remiss if I didn’t include @Josh Ho-Sang here. Officially an NHL free agent, Ho-Sang is a current member of the Toronto Marlies and all indications point towards him signing an NHL contract with the Leafs sooner than later. Ho-Sang has had a solid campaign for the Marlies, slowing down after a hot start to record 20 points in 27 games. Two years removed from his last full season, it’s been great to see Ho-Sang get back in a rhythm this year and earn himself a spot on Canada’s roster.
Finally, for the players whose NHL rights are still owned by Toronto, @Denis Malgin and Fabrice Herzog will both feature for Team Switzerland. Herzog was a 2013 draft pick who returned to Switzerland after one year in the QMJHL and remains on the reserve list indefinitely. Malgin, meanwhile, is a much more notable player here for Toronto.
Acquired in 2020, the Leafs retained Malgin’s RFA rights over the summer despite him returning to the Swiss league once again. He will star on Switzerland’s top line and should be one of the best players at the tournament, as shown by his 42 points in 38 games this season with ZSC. I wouldn’t rule out a future return to North America for the 25-year-old, either.

Eight players at the 2022 Beijing Games have suited up for the Toronto Maple Leafs at some point in their career.
By far the most experienced of the group is fan favourite @Leo Komarov. Across parts of five seasons, Komarov played 327 games for the Leafs, representing the team at the 2016 All-Star Game. Originally signed with the New York Islanders at the beginning of the season, Komarov and the Islanders mutually terminated the contract in order for him to return to the KHL and play for Finland at the Olympics. He’ll likely play in a bottom-six, defensive role for Team Finland.
Another player who appeared in the NHL earlier this season but had their contract mutually terminated is @Kirill Semyonov, whose brief Leafs career ended after just three games. He’s returned to the KHL and similar to Komarov, should lineup in a bottom-six, shutdown role as Team Russia looks to defend their title from 2018.
The much-maligned @Martin Marincin heads to Beijing to compete in his second Olympics, last appearing in 2014 for Team Slovakia. After six seasons as a member of the Leafs organization, in which he appeared in 142 games for Toronto, Marincin returned to Europe over the offseason. There’s a chance he pairs with Šimon Nemec, a top prospect for the 2022 draft, for Slovakia.
The only former Leafs player to make Team Canada is none other than @Daniel Winnik. Winnik signed with Toronto twice, playing 114 games across the 2014/15 and 2015/16 seasons. Twice traded at the deadline as a rental, Winnik fetched the Leafs two second-round picks, a fourth-round pick, and @Connor Carrick across the two deals. Since leaving North America in 2018, Winnik has become a fixture in the Swiss league and should be one of Canada’s key contributors.
@Mikko Lehtonen came to Toronto with high expectations but failed to make an impact in the 2020/21 season, resulting in a trade to Columbus after 17 games with the Leafs. He’s since returned to the KHL and will be a major piece for Team Finland in Beijing, possibly forming a top pairing duo with @Sami Vatanen.
Joining prospects Matthew Knies and Nick Abruzzese on Team USA are @Nick Shore and @Kenny Agostino. Shore played 21 games for Toronto at the beginning of the 2019/20 season before being claimed off of waivers by Winnipeg. He’s most remembered for infamously playing over @Jason Spezza in the opening game of the season.
Agostino, meanwhile, only played one game for the Leafs, but was a first-line player for the Marlies for the 2019/20 and 2020/21 seasons. His 27 goals in 53 games during the 2019/20 season rank as the 6th best single-season mark in Marlies history. He’s a strong candidate to lead Team USA in scoring.
Finally, @Korbinian Holzer heads to his second Olympics for Germany an incredible 12 years after his first Games. Holzer was a Toronto draft pick in 2006 and spent five seasons in the system split between the NHL and the AHL from 2010 through 2015, being traded to Anaheim at the 2015 trade deadline.

Those are all the primary Leafs connections at the Olympics, but if you’re a nerd who likes niche Leafs trivia like myself, we can go a bit deeper. Here are the remaining players who are former Toronto Marlies, used to be Leafs prospects, or once attended Toronto’s training camp or development camp.

NHL rights once owned by Toronto

The men’s ice hockey tournament at the 2022 Beijing Olympics begins Wednesday, February 9. When you tune in or watch the highlights in the morning, be sure to remember a couple of these Toronto Maple Leafs connections.
Uncategorized
Recent articles from Kyle Cushman