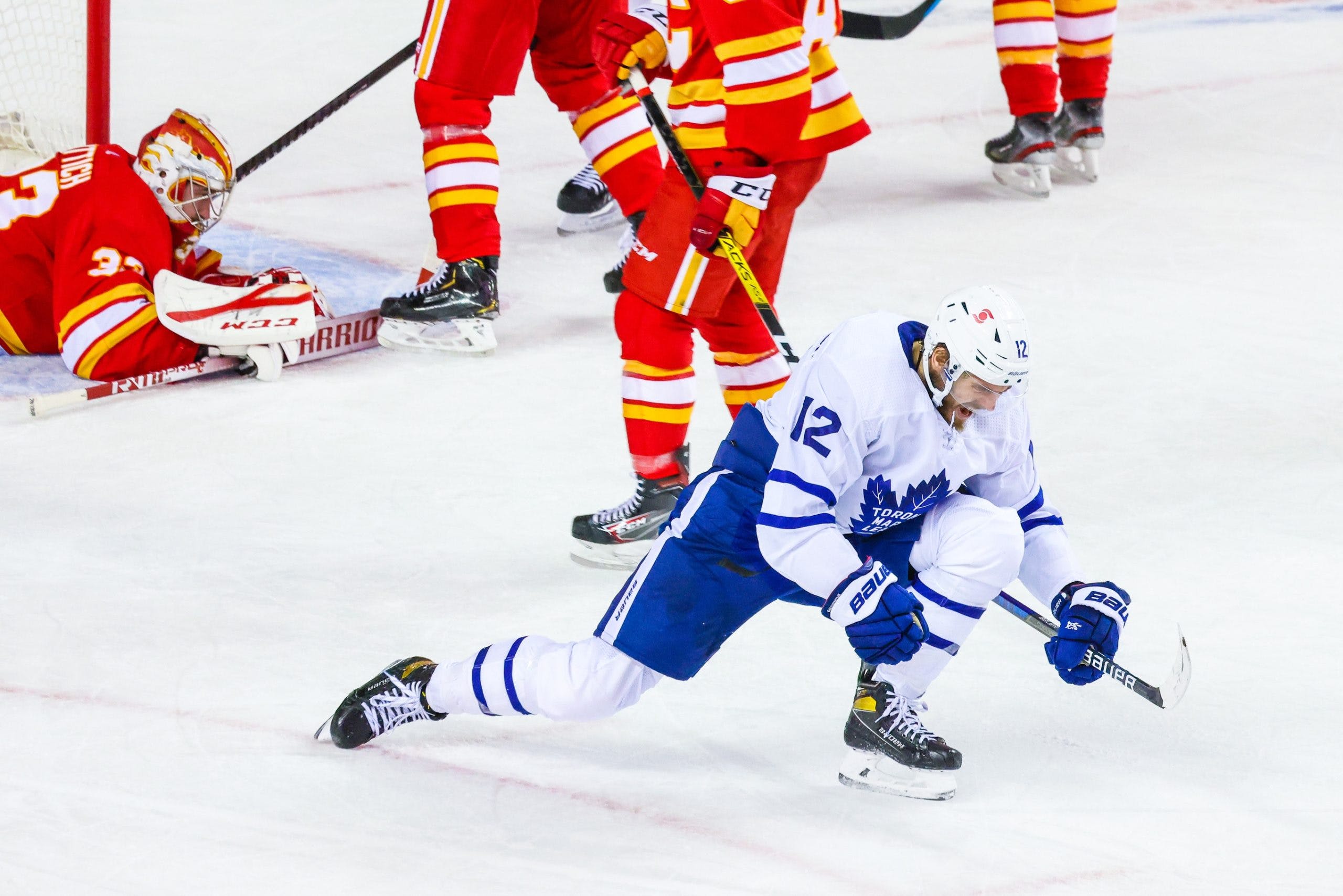 By Nation World HQ
1 year ago
by OddsShark (@OddsShark) – Sponsored Post
The Toronto Maple Leafs have a bad game to flush, but their scant value on the moneyline indicates bettors should look more at a string of OVER trends. The Maple Leafs are -260 favourites and the Calgary Flames are +220 underdogs with a 6.0-goal total on the NHL odds for Tuesday at sportsbooks monitored by OddsShark.com.
Toronto, which lost 4-2 against the Montreal Canadiens on Monday, is 4-2 in its last six games when it played the previous day with the OVER hitting four times at betting sites. Calgary, which has a game in Montreal on Wednesday, is 4-6 in its last 10 games that came on the front end of a back-to-back with the total going OVER seven times. The Maple Leafs are 16-4 in their last 20 games when they have gone deeper into minus money than -240, with the OVER hitting 13 times. The Flames are 2-10 in their last 12 games as an away underdog of +150 or more, with the OVER hitting seven times.
Flames vs Maple Leafs | OddsShark Matchup Report
The Maple Leafs lead the season series 6-2-0 with an 18-12 edge in five-on-five goals. Toronto has earned that outcome, with edges in expected-goals for percentage, or xGF% (60.9), scoring-chance share (54.8) and high-danger chances (59.8), per Natural Stat Trick. Head-to-head, the Flames are five-for-23 on the power play and Maple Leafs are three-for-29. (All advanced stats are based on score- and venue-adjusted five-on-five play.)
The Flames, who are 17-21-3, have had two days off since a 5-0 home win against the Edmonton Oilers on April 10 that fanned their slim playoff hopes. Calgary has good three-line depth led by centers Elias Lindholm, Sean Monahan and Michael Backlund, but the Flames are dead last in the 31-team NHL in share of high-danger goals in the five-on-five phase (26.9) over the last 30 days. Backlund, Monahan and left wing Matthew Tkachuk are among the team co-leaders in scoring against Toronto with five points apiece. Lindholm has yet to score against Toronto despite being second on the club with 21 shots.
Since March 14, Calgary ranks 19th in xGF% (48.0), 14th in scoring-chance share (50.3) and 23rd in high-danger chances share (46.0). The Flames are 23rd in goal scoring (2.46 per game) and 27th in goals against (3.23). Their power play ranks 17th (17.7 percent) and their penalty killing ranks 19th (79.5).
Jacob Markstrom, who has a 13-14-1 record with a 2.91 goals-against average and .901 save percentage, is projected to start in goal for Calgary. Markstrom is 1-3-0 with a 3.82 GAA and .864 save percentage in his last four starts against Toronto.
The Maple Leafs, who are 28-11-3, should be seeking something closer to a characteristic effort after basically taking the first and third periods off at Montreal on Monday.  The Auston Matthews-Alex Galchenyuk-Mitch Marner (listed centre-left-right) line had a below-average night by their standard during the defeat. However, both the John Tavares-Zach Hyman-Ilya Mikheyev and Pierre Engvall-Nick Robertson-Wayne Simmonds trios had, according to MoneyPuck, a five-on-five xGF% in the 75 percent range. Matthews leads Toronto in goals (five), points (nine) and shots (24) in the season series against Calgary. Mikheyev has been the hardest-luck Toronto attacker, with zero goals on 17 shots. Simmonds, with three goals in six games against the Flames, might be a better value play in anytime scorer props.
Toronto is second in both xGF% (60.1) and scoring-chance share (58.2) as well as first in high-danger chances share (63.4) over the past 30 days. During this span, the Maple Leafs are fifth in goals per game (3.15) and 11th in goals against (2.62). Their power play ranks 31st (3.1 percent) and their penalty killing ranks 12th (82.1).
Jack Campbell will surely have the night off in goal. David Rittich, who was 4-7-1 with a  2.90 GAA and .904 save percentage for Calgary before Toronto traded for him on Sunday, is eligible to play but has yet to practice with his new team. Third-string goalie Michael Hutchinson, who is 4-2-1 with a 2.42 GAA and .919 save percentage, has won two of his three starts this season against Calgary.
Check out OddsShark on Twitter and Instagram or head to YouTube for analysis on this week’s top games. As well, the OddsShark Computer serves up daily NHL picks for bettors.
Odds News
Recent articles from Nation World HQ