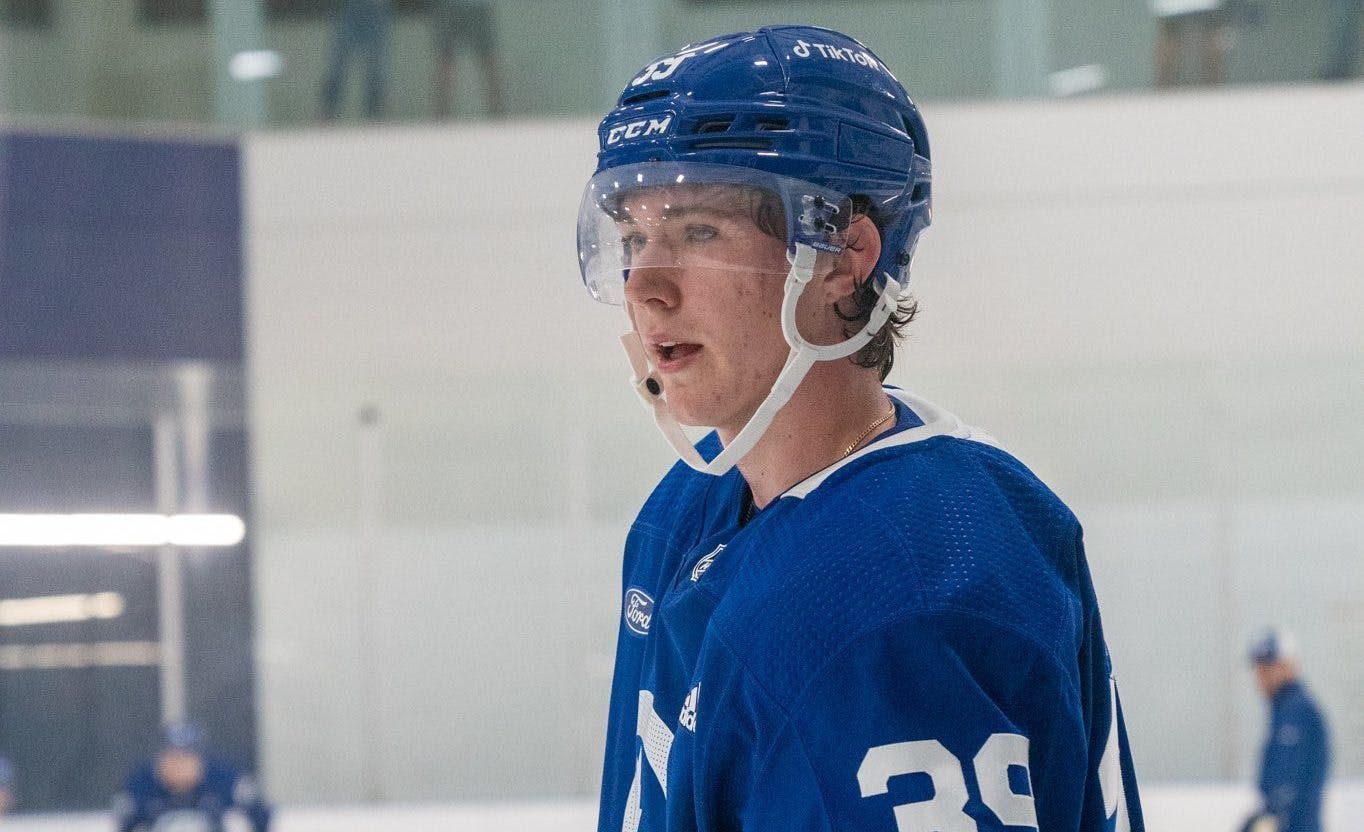 By Nick Barden
4 months ago
The final day of Maple Leafs development has come and gone with a number of players standing out on Friday.
A few players were missing from the second scrimmage, including Jeremy Wilmer, who was injured in the first scrimmage, Mathieu De St. Phalle, who left the ice early on Thursday with what looked like a shoulder injury, and Graham Slaggert, who was wearing a red non-contact jersey on Thursday.
De St. Phalle had a great camp and it is disappointing he didn’t get an opportunity to showcase himself on Friday.
The 22-year-old five-foot-ten forward spent a lot of time earlier in camp playing with Matthew Knies, and looked good too. His ability to be strong on the puck being a smaller forward was very intriguing and his on-ice awareness was great as well.
But if I had to name any other standouts, I’d start with the Jackson twins, Dylan and Ty. They each are very quick and tenacious on the puck — sometimes even making passes to each other that you didn’t think would be possible.
Call it twin telepathy.
Dylan played incredibly well in both scrimmages, scoring three goals (four points) in the two games. Both are very good players and will be very effective once they leave school — whenever that may be.
“The Henrik and Daniel is what I call them,” Assistant General Manager and Head of Player Development, Dr. Hayley Wickenheiser laughed. “They’re a package deal, they go together. I think it’s very obvious in this camp that when they’re on the ice, they can move the puck, they know where each other are, they’re shift little players.
“Obviously, their size is a limiting factor that you think about at this level, but they move the puck really well and it’s very obvious off the ice. So, it’ll be interesting to see how they do down at University together.”
Goaltender Luke Cavallin, who’s signed to an AHL contract with the Marlies, had a great camp as well. The 21-year-old made a number of big saves in each of the scrimmages.
He’ll likely be off to the Newfoundland Growlers to battle for a spot there in the fall.
Most of the players who were drafted higher by the Maple Leafs had pretty good camps as well. Max Ellis looked particularly good, using his speed, shot, and puck protection to maximize his abilities. Although he’s on the smaller side, he’s incredibly strong on the puck in the offensive zone.
Knies’ camp wasn’t good nor bad. Having not played a game since his season ended in Minnesota, you could see the fatigue early on. Putting that together with how tough the Maple Leafs staff made this camp — it was going to be very physically demanding.
The 19-year-old had some really good chances throughout the two scrimmages, but never capitalized on them.
“His ability to shoot the puck, his release is quite good,” said Assistant General Manager and Head of Player Development, Dr. Hayley Wickenheiser. “I think for us, it’s continuing to help build into the elements of his game, being able to be a little bit more agile out there, and continue to impose his will every time he steps on the ice physically to be the physically dominant player that we think he can be.”
One of the aspects that stood out to me from the first scrimmage to the second was his ability to not allow frustration to creep in. In the first, Knies was trying to do a lot out there but you could also see how visibly frustrated he got with himself.
That wasn’t the case in the second scrimmage — he was much more calm and just let plays come to him rather than forcing it.
“Like anybody, he’s pretty nervous in his first couple of days and probably feels like as the highest pick here, he’s gotta impress and put on a show,” Wickenheiser said on Friday. “But we just talked to him about is, every day get a little bit better, work with the skills coaches, take away things that you’re gonna use in a long-term forecast here to build into next season, and to realize that when he comes into Toronto, there are other players here that will take over the spotlight, he doesn’t have to be the guy.
“So, to just continue the little details in his game that we’re looking for when he comes back to join us.”
Knies was asked about if he was going to return to Toronto once school is over next spring, but he said his only focus right now is getting ready for next season in Minnesota, and the World Juniors, obviously.

The 19-year-old did get a tour of Scotiabank Arena and the facilities there, though.
“Getting to see the rink, getting to see the locker room, it’s obviously something you look towards, work for.” Knies said on Friday. “As a kid, you work so hard to make it in that big arena, with those fans and to be in the NHL playoffs, so to see that kind of stuff was really incredible and something I won’t forget.”
Fraser Minten was one player who registered multiple points in the second scrimmage. He had a strong final day of Maple Leafs development camp.
“Great kid, very smooth on the ice. He’s very young and physically, obviously, his explosive power and strength is going to come with time,” Wickenheiser said on Friday. “But you can see that he thinks the game really well. We’re just trying to encourage him to play the game, not over-think situations because he’s so cerebral on the ice. But those are the skills that he has are very projectable into the way I think he can become an NHL player.”

Another interesting player throughout the week was Maple Leafs defensive prospect, William Villeneuve. He’ll be joining the Toronto Marlies this fall for his first pro season and looked really strong throughout camp.
“Will took a big step this year in St. Johns.” Wickenheiser said. “We worked a lot with him on his posture on really his mental side of the game in terms of not getting down on himself and staying consistent. And I think the next transition for him, when he comes up with the Marlies next season will be defending and really being able to solidify that part of his game.
“We know that he’s got offensive upside, he can move the puck. Sometimes the simple play is the best play and I think when you’re at the pro level, you have to understand those moments — when to complicate it, when to keep it simple. And then, just his physical development and continuing to put mass on and physical strength is gonna be key for him. But he’s obviously, this week, he had a very good week and he’s still relatively fresh coming off of the Memorial Cup win.”
It’s difficult to find one player who didn’t stand out at a camp like this. Mostly, if not all of Toronto’s prospects who’ve been drafted by the organization played really well throughout the week.
But now the real work begins. It’s up to each of these players to put in the work away from this camp and throughout their next season. Not just to show the Maple Leafs, but to show all of the teams that they have a future at the NHL level.
More from TheLeafsNation.com