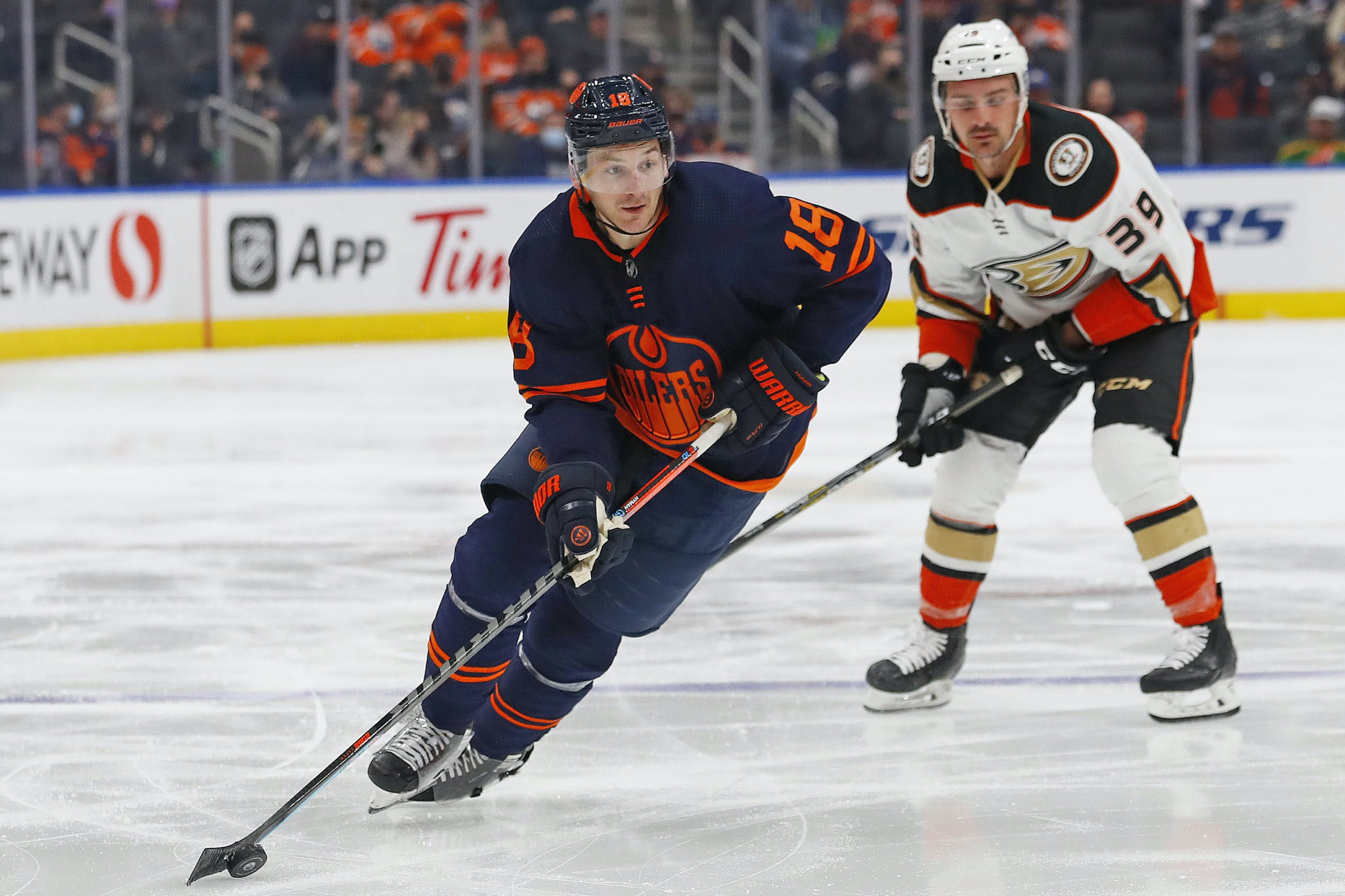 By Joseph Zita
9 months ago
The month of February has come and gone in the NHL and that means that some former Maple Leafs have had yet another month under their belt with their new teams that they signed to this past off-season. From players like Zach Hyman to Nick Foligno to even a guy like Alex Galchenyuk and more, I go over the month they just had as well as the season they’re currently having with their new squad.

February 2022 stats: 12 GP – 6 G – 4 A – 10 PTS – 20:48 TOI
2021-22 stats: 47 GP – 19 G – 16 A – 35 PTS –  19:20 TOI
Contract: 7 years x $5.5M
It’s no secret that it stung when Zach Hyman left the Toronto Maple Leafs this past off-season and signed a seven-year deal with the Edmonton Oilers, and I’m pretty sure a lot of other Leaf fans can agree with me on that. However, it stings a little less now because Kyle Dubas and company went out and signed Michael Bunting to a two-year contract carrying an AAV of $950K and he has been producing at a great rate on the wing with Matthews and Marner. But just because Hyman left Toronto doesn’t mean his production will stop either, especially given the fact that he is now on a team with two of the best players in the world in McDavid and Draisaitl.
Hyman came out flying out of the gates to start the year with the Oilers and felt like he scored in almost every game in the month of October but then slowly slowed down in production as the season progressed. Now, obviously, Hyman isn’t the player that will put up 60 plus points every season in his sleep, but he is someone who is capable of giving you really solid production in the lineup, especially if he’s playing beside some elite players. His main job is to retrieve pucks in the corner, battle in front of the net, throw his body around when needed, he’s someone the Oilers needed and someone the Maple Leafs appreciated very much.
This season Hyman is currently doing all that and more for this Oilers team and is helping them in more ways than one. In the month of February, Hyman played in 12 games and played excellent in those contests recording 10 points – six goals and four points – while averaging almost 21 minutes of ice-time a night at 20:48. Hyman will continue to be a very important piece to this Oilers team going forward this year if they want to make the playoffs because they’re in a Pacific division where it’s a lot closer than people thought it would be heading into the season.

February 2022 stats: 8 GP – 5-1-2 – 2.13 GAA – .931 SV% – 2 SO
2021-22 stats: 38 GP – 29-7-2 – 2.03 GAA – .930 SV% – 3 SO
Contract: 2 years x $4.5M
It’s honestly been incredible to see Frederik Andersen bounce back in a major way this season with the Carolina Hurricanes, but it also kind of stings because the Toronto Maple Leafs could really be using that goaltending right about now due to both Jack Campbell and Petr Mrazek struggling as of late. However, this is about Andersen right now and the Vezina type season he is currently having with the Hurricanes who are one of the best teams in the entire league. As we all know, Carolina signed Andersen to a two-year deal carrying an AAV of $4.5M in the off-season, and initially, some people thought that was a little rich given his back-to-back poor seasons with the Maple Leafs, but clearly, he has proved everyone wrong and bounced back.
Not only did Frederik Andersen have a great month of February posting a record of 5-1-2 and recording a 2.13 GAA and a .931 SV%, but he’s been absolutely incredible all season long, well, basically all season long minus the month of November where he kind of fell off in his performance compared to the month of October. But nonetheless, Andersen has been as good as it gets all season long for the Carolina Hurricanes and now has a record of 29-7-2 with a 2.03 GAA and a .930 SV% with 3 shutouts in 38 games played. Simply incredible for the Danish netminder.
Now, when I say Frederik Andersen continues to be in Vezina Trophy conversation, I don’t mean he will flat out win the award because there is also another European goalie in the league this season who is putting up historic numbers in the crease and might not only win the Vezina Trophy this season, but he may very well even win the Hart Trophy as he has been without a doubt the New York Rangers’ best player. It’s Igor Shesterkin. He has a ridiculous 1.95 GAA and a .941 SV% in 34 games this season! Simply out of this world for the 26-year-old goalie.

February 2022 stats: 10 GP – 0 G – 0 A – 0 PTS – 12:45 TOI
2021-22 stats: 36 GP – 1 G – 6 A – 7 PTS – 13:46 TOI
Contract: 2 years x $3.8M
It’s been quite a rough season for Nick Foligno so far with his new team the Boston Bruins. Now I know Foligno isn’t the same player offensively as he once was dating back to his later days with the Senators and the days with the Blue Jackets, but Foligno is still someone who can give you some sort of offense on any given night but he’s also someone who is reliable defensively and as we all know, he’s someone who isn’t afraid to rough things up.
Now, for that exact reason, Foligno is going to be a very, very important piece to this Bruins team heading into the final stretch of the regular season and into the playoffs because Foligno is that type of player that plays playoff-style hockey and it’s definitely great to have someone like that on your hockey team.
Looking how he’s produced so far through just over the midway point of the season is not good by any means. He’s been hit with a couple of injuries so far and that has obviously kept him out of the lineup but when he’s been able to suit up for some games for the Bruins, he’s not showing up on the scoresheet. He played in 10 games in the month of February and posted zeros across the board in goals, assists, and points while averaging almost 13 minutes of ice-time. Over the 36 games he has played in so far, he does have seven points – one goal and six assists – while averaging almost 14 minutes a night at 13:46 of ice-time.

February 2022 stats: 0 GP – 0 G – 0 A – 0 PTS – 0:00 TOI
2021-22 stats: 23 GP – 2 G – 4 A – 6 PTS – 17:25 TOI
Contract: 3 years x $850K
Zach Bogosian didn’t play in the month of February with the Tampa Bay Lightning due to an injury he sustained and is still currently on the IR listed with a lower-body injury. It’s been a tough season for the defenseman as he has battled a small handful of injuries so far and has only been able to suit up for 23 out of Tampa Bay’s 51 games this season. Bogosian, who was with the Maple Leafs last season provides great third-pairing/sheltered minutes and will throw his body around and be physical when needed. Toronto fans witnessed that first-hand last season and I think we can agree he was a good fit on their third pair last year. As I said, Bogosian has only played in 23 games so far this season and in those 23 games has six points – two goals and four assists – while averaging 17:25 minutes of ice-time a night. He’s been nothing more than a solid 5/6 defenseman for Tampa Bay when healthy.

February 2022 stats: 10 GP – 4 G – 3 A – 7 PTS – 14:36 TOI
2021-22 stats: 33 GP – 4 G – 8 A – 12 PTS – 13:15 TOI
Contract: 1-year x $750K
It wasn’t quite the best of starts for Alex Galchentyk with the Arizona Coyotes this season due to an injury and him eventually landing on the NHL’s COVID-19 protocol list. However, as of late, it seems as Galchenyuk has found his game again and is producing on the offensive side of things, especially in the month of February. From when he made his season debut in mid-November to the end of January, Galchenyuk had only been averaging 12:40 of ice-time a night and had just five total points to his name in 23 games. Fast forward to the month of February and he has increased his average of ice-time to 14:36 a night and recorded seven points in 10 games during the month – four goals and three assists. For someone who signed back to a former team of his while they’re in the middle of a rebuild, I feel like it’s important for a player like Galchenyuk to make the best of this opportunity and try and get back to how he performed in his Montreal days or at least very close to it. I feel like when he was with Toronto it kind of helped him somewhat find his game again when he was working with the development staff.
More from THELEAFSNATION
Uncategorized
Recent articles from Joseph Zita