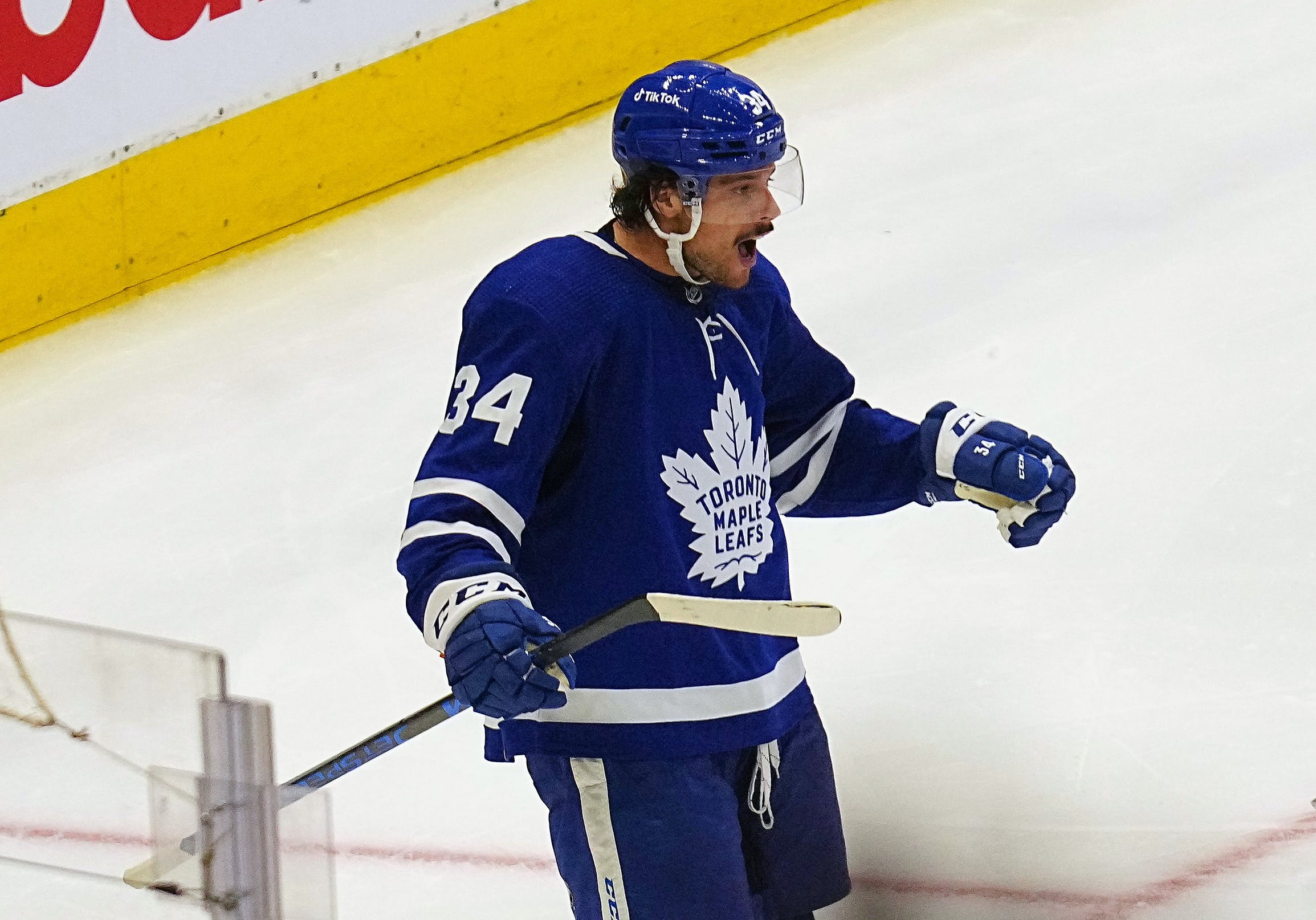 By Nick Barden
8 months ago
Well that was a perfect game by the Maple Leafs, wasn’t it?
One day before this contest, Maple Leafs head coach Sheldon Keefe said this would be a “borderline violent” series, while Lightning head coach Jon Cooper noted that Tampa has “been through all the wars.”
It looked like the Lightning missed one war on their way to two-straight Stanley Cups, though. The Maple Leafs played a near-flawless game defeating Tampa 5-0 and taking the lead with their first win of the series.
But their next game, which is on Wednesday night, will likely look a lot different.
Back to Monday night’s game, though, as there’s a lot to unpack when it comes to what some of the key moments in the game were.

We begin with likely the biggest moment of the game for Toronto — their penalty kill after Kyle Clifford’s match penalty for slamming Ross Colton into the boards from behind.
Toronto’s penalty kill has been one of the NHL’s best all season long, but to limit Tampa to only two shots is an incredible feat, especially in game one. Toronto had more scoring chances down a man than the Lightning did on the power play and that’s something the Maple Leafs can be proud of heading into game two.
Jake Muzzin, who’s been ridiculed a lot throughout the season because of his underperforming play got Toronto on the board first.
This was a massive goal for the 33-year-old that helped his play grow throughout the game — bringing back the defenceman who’s been an important piece for the Maple Leafs in recent seasons.
Aside from the goals, another player who had a strong game was Timothy Liljegren, who made his NHL playoffs debut and didn’t look out of place at all.
The 23-year-old made a number of solid plays throughout the game — highlighting what we’ve known all season long — he’s an NHL defenceman who’s deserved his shot in the Maple Leafs’ lineup.
After a first period with a lot of fireworks, the second period didn’t disappoint on that front either.
The Lightning got into penalty troubles early in the period, giving Toronto a five-on-three. Auston Matthews scored his first goal of the playoffs on a great shot that beat Andrei Vasilevskiy.
Toronto would get into penalty troubles of their own after the goal, but that obviously didn’t stop David Kampf from getting in on all the action while shorthanded.
Like people have said all season, it’s not a penalty kill for Toronto, it’s a power kill.
The Maple Leafs weren’t done scoring, though, as they remembered that there wasn’t a goal at even-strength goal scored throughout the period. Mitch Marner received the puck in the slot and had incredible patience to wait out Vasilevskiy and put the puck into the almost wide open net.
The 24-year-old ends an 18-game goalless drought in the playoffs, and scoring that could do massive numbers on his confidence level. Everyone in Maple Leafs Square loved to see Marner score, too.
Marner ended the second period assisting on both Matthews and Kampf’s goals and also scoring one of his own. A big period by him.
The third period brought one final goal after Vasilevskiy mishandled the puck behind the net, giving right to Matthews for the easy empty net goal.
After Matthews scored, things began to get chippy with both teams essentially participating in a line brawl. Morgan Rielly got a few punches from Pat Maroon early in the scrum before bloodying Jan Ruuta with a few punches.
The second-half of the period didn’t have as many fireworks, but the biggest moment was the game finishing with Jack Campbell securing his second-career post-season shutout.

One of the most important numbers I’m taking away from this game is Vasilevskiy allowing five goals on 33 shots. While you can put a lot of stock into this game saying how good the Maple Leafs played, I don’t believe you’ll see a bad game like that again from the 27-year-old.
Jon Cooper said that both teams likely won’t take much from Monday night’s game, but I think Toronto will be incredibly proud of this performance.
The Maple Leafs led in xGF% at all strengths in the first (60.93%) and third (68.74%) period, but lost the second only by two decimal points. Toronto had a 49.9% xGF while Tampa had a 50.1% xGF.
What’s most surprising is that even though the Maple Leafs had three goals in the second period, they lost the CF% in all situations. The Lightning led the way at 57.78% while Toronto trailed behind with only 42.22%. Looking at the other two periods, Toronto won the first with a 57.14 CF% and the third was split 50/50.
Although the score line suggests it, I believe there’s a lot to look back on in this game when heading into their next match.
The play between Jack Campbell and Vasilevskiy will dictate where game two will go. Those two netminders are the players who can shift this series either way and expect both to be on their best in game two.
The same goes for the rest of the Lightning team.
Back-to-back Stanley Cup Champions don’t forget how to survive in playoff hockey, so be ready for the second game to be a bigger war than the first.
It’ll be incredibly interesting to see who comes in and out for both teams, and whether or not we see someone like Michael Bunting for game two on Wednesday night.
More from TheLeafsNation.com
POINTSBET IS LIVE IN ONTARIO