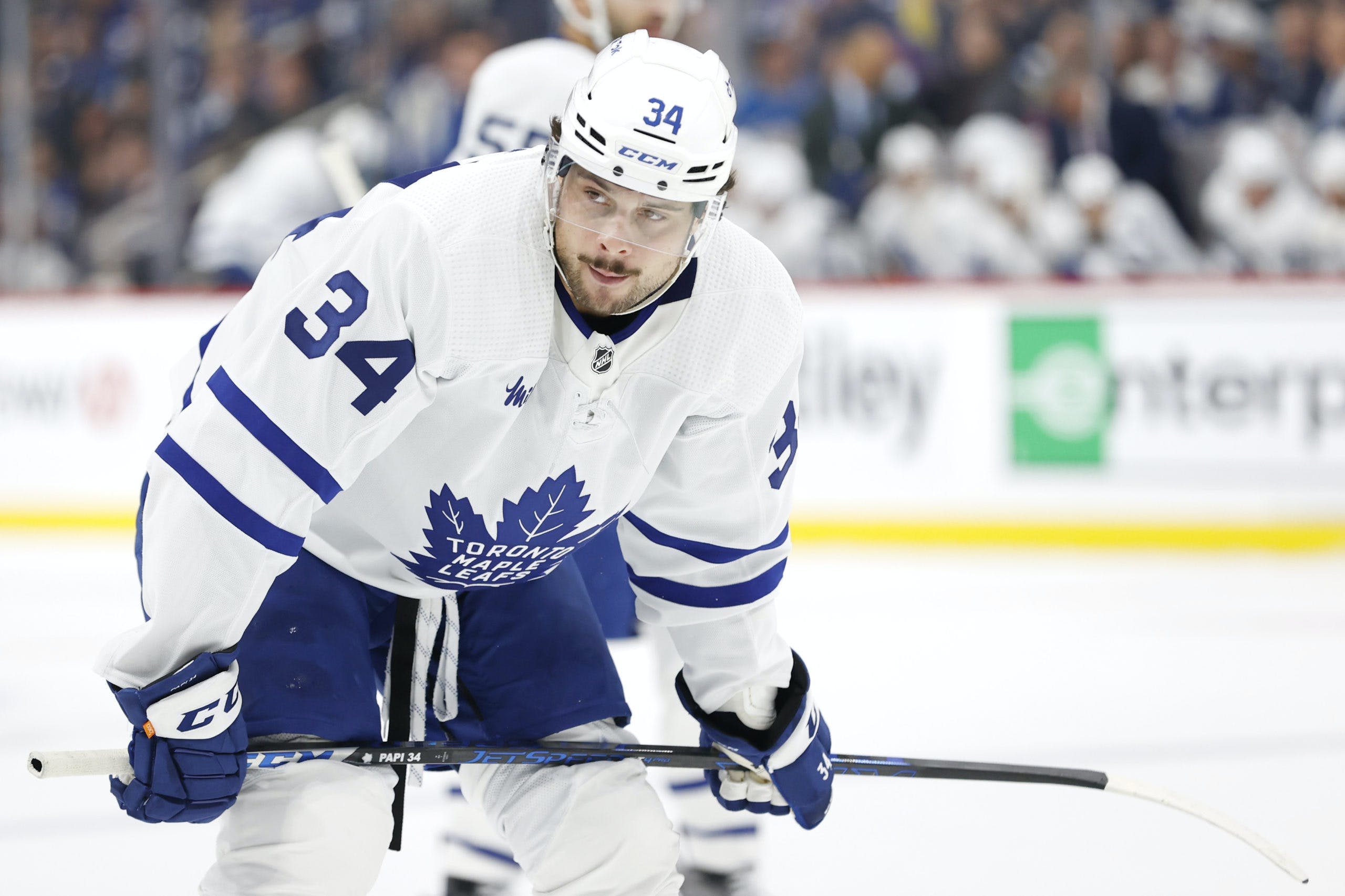 By Nick Barden
3 months ago
Auston Matthews has only one goal through his first seven games with the Maple Leafs this season.
But that should change anytime now.
The 25-year-old has had plenty of chances to put the puck into the back of the net — 33 shots on goal to be exact. Yet somehow, someway, the reigning Rocket Richard trophy winner can’t buy a goal.
“I just need one to go in,” Matthews said after Monday night’s loss to Vegas. “I think that’s the biggest thing is you get one go in and you just kind of relax a little bit.”
Seeing him not score early on in the season shouldn’t come as a surprise, nor should it scare anyone. The same concern surrounding Matthews came at the beginning of last season, too, where he only registered one goal through his first six games.
Just having that single goal, the 25-year-old found himself staring down the barrel of an incredibly below average shooting percentage. It was 4.0% at that moment, and this year, after seven games, it’s even lower at 3.3%.
What stands out is how Matthews played after he was able to score his second goal of the season.
Once Matthews was able to pot number two last year — he ended up going on a tear — scoring 19 goals in his next 21 games. And we all know what he did after that, finishing atop the NHL in scoring with 60 goals across 73 games.
The 25-year-old ended last season with a 17.2 S%, the third highest of his six-year NHL career.
But looking at his start to this year, some could even argue that Matthews hasn’t scored a goal off a shot, since his only goal was a tip-in off a Mark Giordano point shot.
“I mean, I’ve gone through these before,” Matthews said on Wednesday after practice. “I’m not sure it’s a super unusual situation. I mean, I just approach it similarly, I just put in the work, have fun out there, shoot the puck and once one goes in, hopefully just get on a roll, get that confidence back, and just keep going.”
It should be noted that although the 25-year-old hasn’t put many pucks into the back of the net, he’s still contributing without the puck as well. Matthews has made a conscious effort to use his six-foot-three, 220 pound frame to his advantage this season, and it seems to be working.
Everyone does this for goals, but if Matthews continues to use his body to hit his opponents — at the pace he’s going right now — would finish the season with 234 hits (a 249% increase from the 2021-22 season).
I don’t know about you, but that’s big.
Matthews’ highest hit total in a season is 67 and he’s already at 20 through seven games. Although pucks aren’t going into the net, the 25-year-old is still bringing a lot of other aspects to the table for the Maple Leafs.
If history tells us anything, it’s that Matthews’ 3.3 shooting percentage cannot last for much longer. The goals are going to come, and when they do, it’ll feel like the 25-year-old is scoring in every game for the remainder of the season.
He’s levelling up as a player with all of the hits, his defensive play, and the fact that he’s still averaging almost a point-per-game with only one goal. But when Matthews does return to his average shooting percentage of 16.1%, another layer will be added to his game.
That, in turn, will make him one of the scariest players in the entirety of the NHL once again, just in time for Halloween.
Editorials
Recent articles from Nick Barden