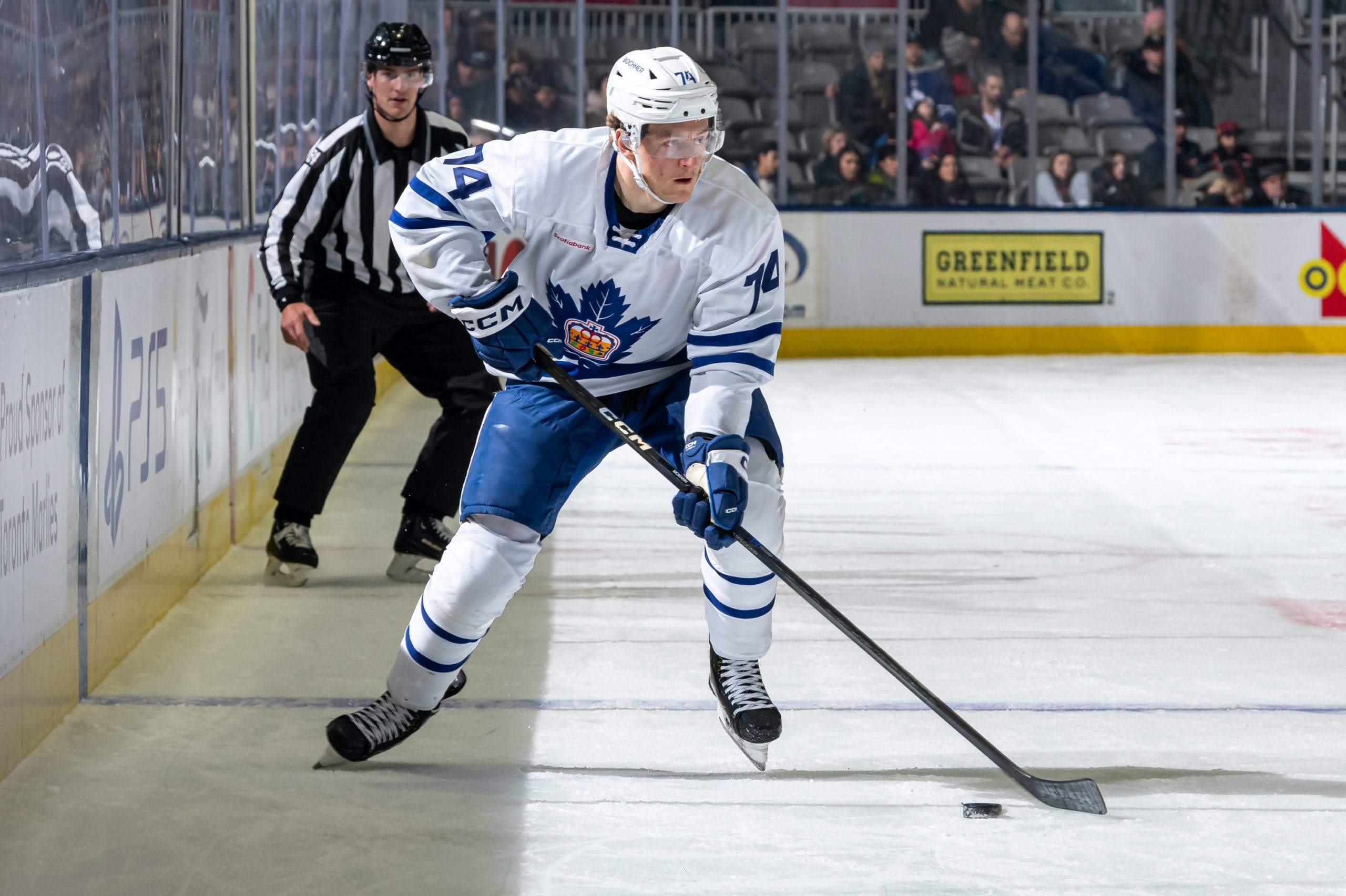 By Nick Barden
22 days ago
Three months ago, all that stood between Bobby McMann and his dream was an opportunity.
And now he’s got it.
On Monday, the 26-year-old was awarded the AHL’s Player of the Week honours after notching six points in his last three games with the Marlies. It was a sign that McMann was headed in the right direction though I’m not sure he knew where his path would lead him the next day.
McMann’s season began as it normally would: healthy, strong, and ready to take the next step in his career. Except three games in, it was put to a screeching halt because of a lower-body injury that kept him out for a month and a half.
“It’s always a battle for somebody who comes back from injury,” said McMann fives games after fully recovering. “But I think I’ve done a good job so far with not paying attention to it much and just disregarding it, and trusting that it’s there and it’s ready.”
The 26-year-old went on a five-game point streak after returning from injury, then was silent on the score sheet for three games before going on a scorching run again. This time, McMann went on a six-game point streak and his play climbed to new heights throughout it.
“He lives up to his last name, he skates the rink like a man and (he’s) very powerful.” Marlies head coach Greg Moore remarked back in December.
McMann is a player who can bring an immense amount of speed and power to whatever lineup he’s in. Standing at 6-foot-1 and weighing in or around 203 pounds, the 26-year-old is built to play a specific game.
An NHL game.
“I think he has everything that it takes to be a National Hockey League player.” Marlies captain Logan Shaw said.
The 26-year-old has spent most of his time with the Marlies as a left-winger. In every game, he’s seen using his speed and strength to beat his opponent on the outside before cutting in and creating a scoring chance. It’s his bread and butter.
McMann’s shot is also very impressive and he has the ability to fire it off very quickly. All of those attributes have to do with power, and power has to do with how hard he works off the ice.
“His preparation and his process is pretty impressive,” says Moore. “He takes good care of his body really well, works hard in the weight room, rest and recovery — everything else that comes along with being a pro, how he eats.
“And then obviously, his work ethic on the ice every day and being a good teammate has been top notch.”
Later on Monday, after being named the AHL’s Player of the Week, McMann received a phone call from Marlies GM and Maple Leafs assistant GM Ryan Hardy. The 26-year-old was congratulated for being the AHL’s Player of the Week, but the phone call didn’t end there.
Hardy told McMann that he was going up to the Maple Leafs — a goal that the 26-year-old had been working towards since signing a two-year contract last April.

READ MORE: Bobby McMann is “hungry” to take next step after signing with Maple Leafs

“He’s a horse. I think it’s well deserved. I’m obviously very happy for him,” said an excited Shaw on Tuesday. “I hope he goes up there and shows them what he can do.
“A lot of times when you get called up, you’re kind of not really being evaluated, even in your first couple of games. It’s more so just try to show you what it’s like to be there and I hope he goes there and runs away with it.”
McMann skated on the Maple Leafs’ third line on Tuesday alongside David Kampf and Alex Kerfoot. The 26-year-old’s NHL debut hangs on the thread of Auston Matthews’ status for Wednesday’s game vs. Nashville.
If McMann does in fact make his NHL debut, what can we expect?
“At that level, his powerful stride, being able to get to the net, he has an amazing shot and he gets it off really well, too, in some tight spaces, and even if he’s going away from the net he can pick corners pretty well in an uncomfortable situation.” Moore stated.
“But his physicality is going to be important for him at that level, he’s gotta be really hard to play against, use the strength that he has to dominate and physically impose himself.”
Getting to the NHL is no easy feat. The odds are stacked against almost everyone who tries to make it. And although the AHL might seem like it’s so close to the NHL, the jump is still next to impossible for some.
“It’s not easy,” Moore said before pausing for a brief second. “It’s not easy to get to that level and anytime a player spends their whole life chasing their dream to get their first call-up, it’s a pretty special moment.”
Now lies the most difficult part for McMann, if in fact he does get into Toronto’s lineup. Can he remain as a regular NHLer? Can he prove that he belongs in the Maple Leafs’ lineup for more than just a couple of games? All of that is up to the 26-year-old.
But Shaw believes he has all the tools, it’s just a matter of being ready for the opportunity.
“He’s going to be a National Hockey League player and I think it’s up to him when he wants to do it.”
News
Recent articles from Nick Barden