How can Auston Matthews score more than 60 goals for the Maple Leafs this season? 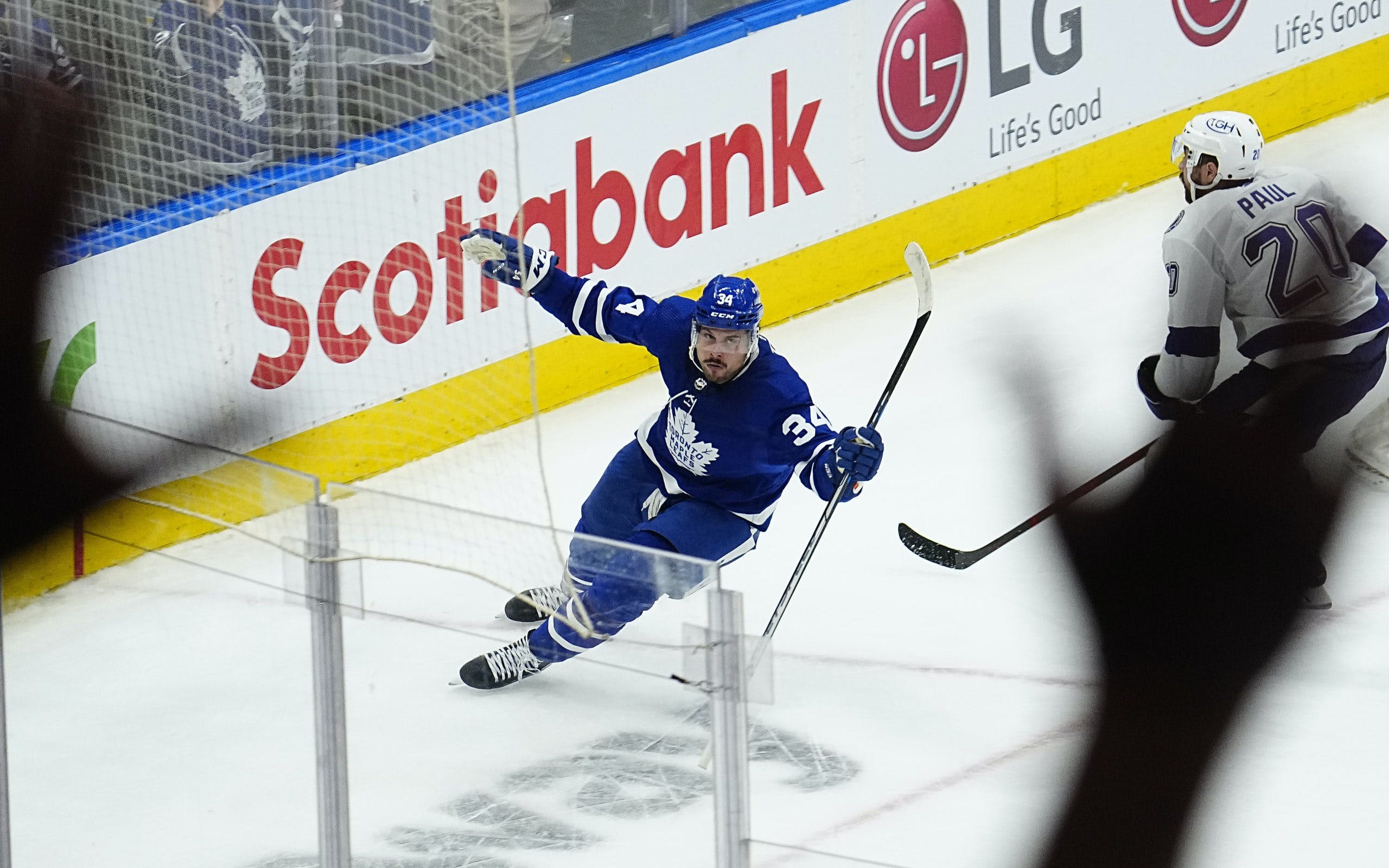 By Nick Barden
2 months ago
If there’s anyone who can break the Maple Leafs’ goal record in a season more than once in his career, it’s Auston Matthews.
The 24-year-old stepped into the unknown last October, not really knowing what could be possible in terms of his goal-scoring abilities. Although we witnessed his 41 goals in 52 games the season prior, not many knew if that was just easier competition or if it was going to be a continued reality.
As we know it now, and after his 50 goals in 50 games campaign during 2021, this will be a regular occurrence for a long time.
When looking at the season ahead, there’s always possible roadblocks holding him back from scoring more. It comes with every player — injuries, not being on your game all the time, and even playing with different players than the year prior.
With Matthews, though, we should all understand by now that he’s always on his game. Albeit, there are instances where he may not be playing well, like the 32 games last season in which he didn’t score a goal. But in the 41 games where Matthews did score, he put the puck into the net 60 times.
The 24-year-old scores a lot of goals, and in bunches too.
Matthews had 15 multi-goal games last season, accumulating 34 goals (what a coincidence) within that time frame. The 24-year-old made up for all the games he missed due to injury by putting the puck into the net multiple times through a 60-minute span.
To put it into even more perspective, the Maple Leafs scored 315 times last season and 60 of those instances were courtesy of Matthews. By the end of the season, he had almost 20% of Toronto’s goals that year.

Looking at Matthews’ goals heat map, there are three areas where he finds the back of the net most. Those zones are around the net and atop of both faceoff circles — where the 24-year-old is most effective.
Speaking of being most effective, outside of the Maple Leafs organization, Matthews is still the best goal scorer. Since entering the NHL in 2016-17, he’s scored the most goals (259 in 407 games) of any player who’s played.

The next nine players below him have scored less goals, but have played more games. Sidney Crosby has played six less games than Matthews since 2016-17 and he’s also scored 80 goals less.
Matthews beats netminders in every way possible, from his wicked wrist shot, to the slap shot, to even his deflection skills. Whenever you think he can’t do something to put the puck into the net, he goes out onto the ice and conquers it right in front of our eyes.
The 24-year-old finished his first NHL season with a 1.7 G/60 in all situations. In each year after that, Matthews leveled up his goal scoring capabilities, allowing his G/60 to rise in the process.
It’s always possible that his G/60 ousts what it was last season, however there’s also the chance that it doesn’t. His goal scoring really depends on whether or not he’s able to stay healthy for an entire season.
If the 24-year-old enters this year fully healthy, with no scratches or bumps, it’s likely that this will be yet another successful season for Matthews. Even if he does get injured, though, it’s worth remembering that the 24-year-old scored 41 goals in 52 games back in the pandemic season — all while having an injured wrist.
When it comes to goal scoring, there’s nothing that can stop Matthews.
The craziest part of his storied career so far is the fact that he can get better than he already is. Still only 24, Matthews is entering his prime after being the first 60-goal scorer since Steven Stamkos in 2011-12. There’s definitely more to give, but how does he do it?
Consistency is going to be the key to success for Matthews. He’s already unbelievably consistent, I know, but there’s another step to take if he wants to level up even further. There’ll be a lot of success coming the 24-year-old’s way if he’s a steady presence and healthy for a full 82 games.
We haven’t seen a 60-goal scorer for such a long time that it feels weird to finally have one again. Just imagine if Matthews is able to hit 70 goals in the next few years — it’ll be mind-blowing — especially in a time where goal-scoring is more difficult than ever.
No one has had more than 70 goals in a season since Alexander Mogilny did back in the 1992-93 season, scoring 76. I’m not sure if Matthews will ever top that, but if history has told us anything, it’s that he has the power to get close to it.
Next year might just be the year where he cements himself as a 60-goal scorer once again. But if the 24-year-old does that, you can count him as the best scorer in Maple Leafs’ history as well.
Do you think Auston Matthews can score more than he did last season? Tell us what you think in the comments below!
(Statistics via Hockey-Reference.com and NHL.com, Goal Heat Map via icydata.hockey)
More From TheLeafsNation.com