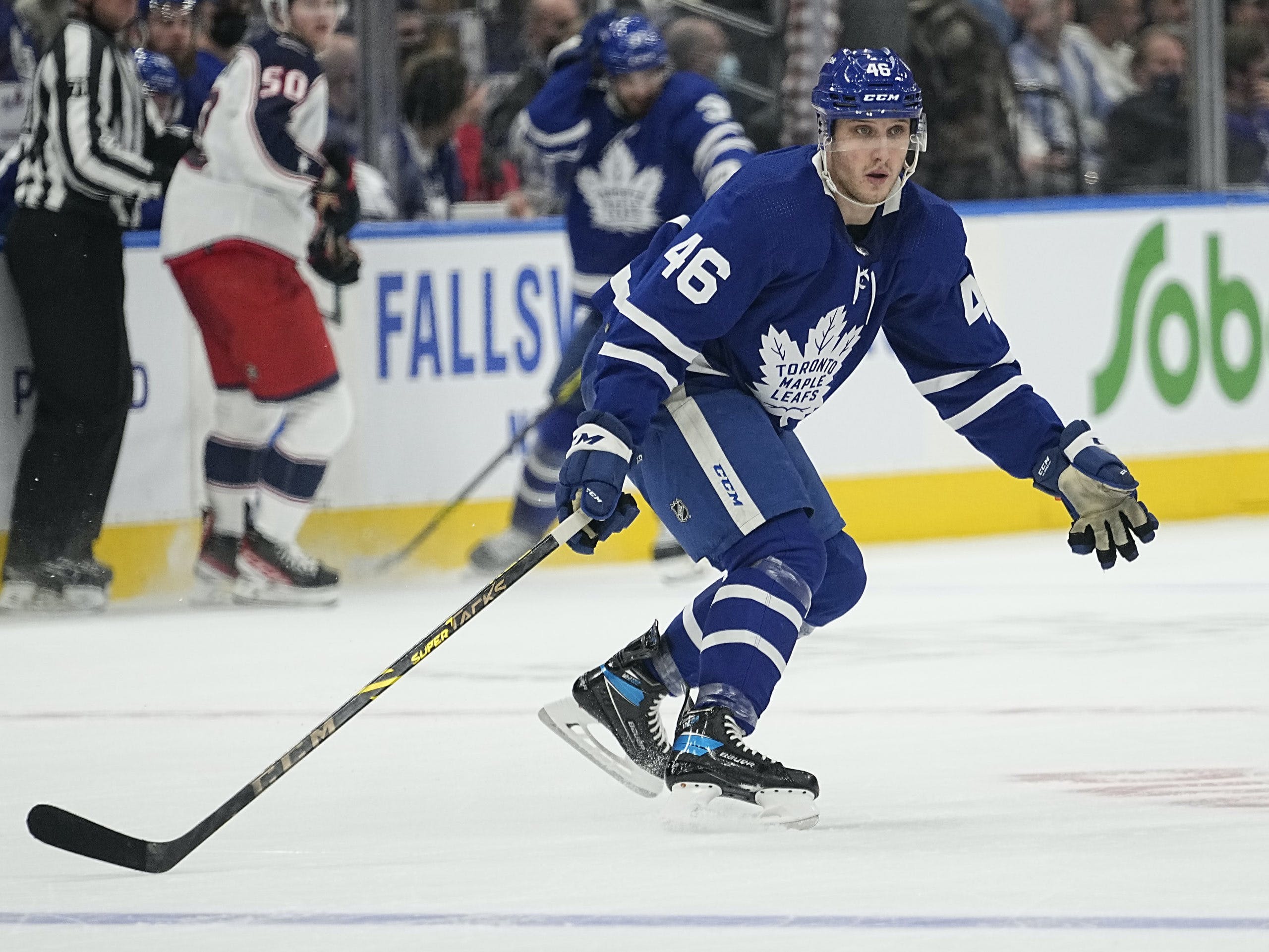 By Nick Barden
3 months ago
The Maple Leafs struggled with depth scoring against the Tampa Bay Lightning in the playoffs last season, but this year might be different.
Once training camp begins, Toronto will have to see whether Calle Jarnkrok, Adam Gaudette, Denis Malgin, and Nicolas Aube-Kubel can work better than the departures of Ondrej Kase, Colin Blackwell, and Ilya Mikheyev.
Looking at a player in particular, like Jarnkrok, it should be evidently clear he’ll be on a defensive shutdown line with David Kampf. The 30-year-old’s underlying numbers with the Seattle Kraken weren’t the best, and understandably so, since the team did have a difficult season.
But what’s most intriguing is his numbers after he was traded to Calgary earlier this year.
Jarnkrok spent much of his time with the Flames playing third-line centre, ending the regular season with 17 games played and four assists through that span. In the playoffs, the 30-year-old scored one goal and added three assists in 12 games.
Although it’s not the best of totals, Jarnkrok is more of a defensive player who might provide a bit more in points than David Kampf.
During the playoffs with Calgary, Jarnkrok thrived playing against his competition, finishing with a 58.04 CF% at five-on-five. The 30-year-old also ended his playoffs with a GF% of 41.67 which isn’t the best, but was able to have his xGF% skyrocket to 57.62.
He’s the type of player who can accumulate a lot of high-danger scoring chances, while only allowing a few in his own end, especially at five-on-five.
If the Maple Leafs are able to have the three of Jarnkrok, Kampf, and Pierre Engvall become a true defensive third line while also providing some depth scoring when needed, Toronto is in good hands.
The fourth line, though, is a bit more unpredictable because of the sheer amount of players vying for only three lineup spots.
Toronto has Aube-Kubel, Gaudette, Malgin, Joey Anderson, Alex Steeves, Nick Robertson (if not in top-six), Kyle Clifford, Wayne Simmonds, Pontus Holmberg, Bobby McMann, and potentially Curtis Douglas all in the mix.
That’s 11 players all possibly trying to make one line.
I believe one of the shoe-ins to secure a spot early on is Aube-Kubel. Although he’s not the biggest point-getter, the 26-year-old easily enters the lineup as one of Toronto’s most physical players. If you were to place him in the Maple Leafs’ lineup last season, he would finish second in hits (140), only behind Wayne Simmonds (148).
He’ll be an important player, especially if Toronto can establish that the fourth line will be a fast, hard hitting, depth scoring line. And almost all of the players listed above fit in that category aside from Simmonds, Anderson, Clifford, and Douglas.
Clifford seems to me like a player who’ll hit about anything in site, Simmonds has slowed down a bit though I do think he can still be effective (just not playing all season), Anderson is more of a strong two-way forward with not much speed, and while Douglas is very strong, his six-foot-eight frame doesn’t allow him to be super quick.
A fourth line that would be interesting is Steeves-Holmberg/Gaudette-Aube-Kubel because the right and left wingers can provide an immense amount of speed. Sprinkling that in with a centre who can, at times, bring a similar tenaciousness seems like the perfect mix.
And if they can all be solid point-getters in a depth role, Toronto has the perfect recipe for success.
The only problem with this bottom-six is that it could run the risk of the Maple Leafs losing Anderson to waivers. I understand that the goal is to ice the best possible lineup, but I do think he’s still an incredibly valuable player to this team in some way.
It’s going to be difficult to choose between some of these players because, really, any that get placed on waivers will likely get claimed. That’ll be the case with all three of Gaudette, Anderson, and Aube-Kubel.
Engvall – Kampf – Jarnkrok
Steeves – Gaudette/Holmberg – Aube-Kubel
This is what I believe to be an effective bottom-six for the Maple Leafs — a defensive third line and a physical, fast fourth line, both with the potential of providing depth scoring.
These next few weeks are going to be very interesting, especially with the Rasmus Sandin contract situation and whether or not that improves. If he and Toronto can somehow make a deal happen, there’ll likely be some roster turnover somewhere.
And that, in turn, could change the way their bottom-six looks heading into the season.
(Statistics via NaturalStatTrick.com & Hockey-Reference.com)
More from The Leafs Nation