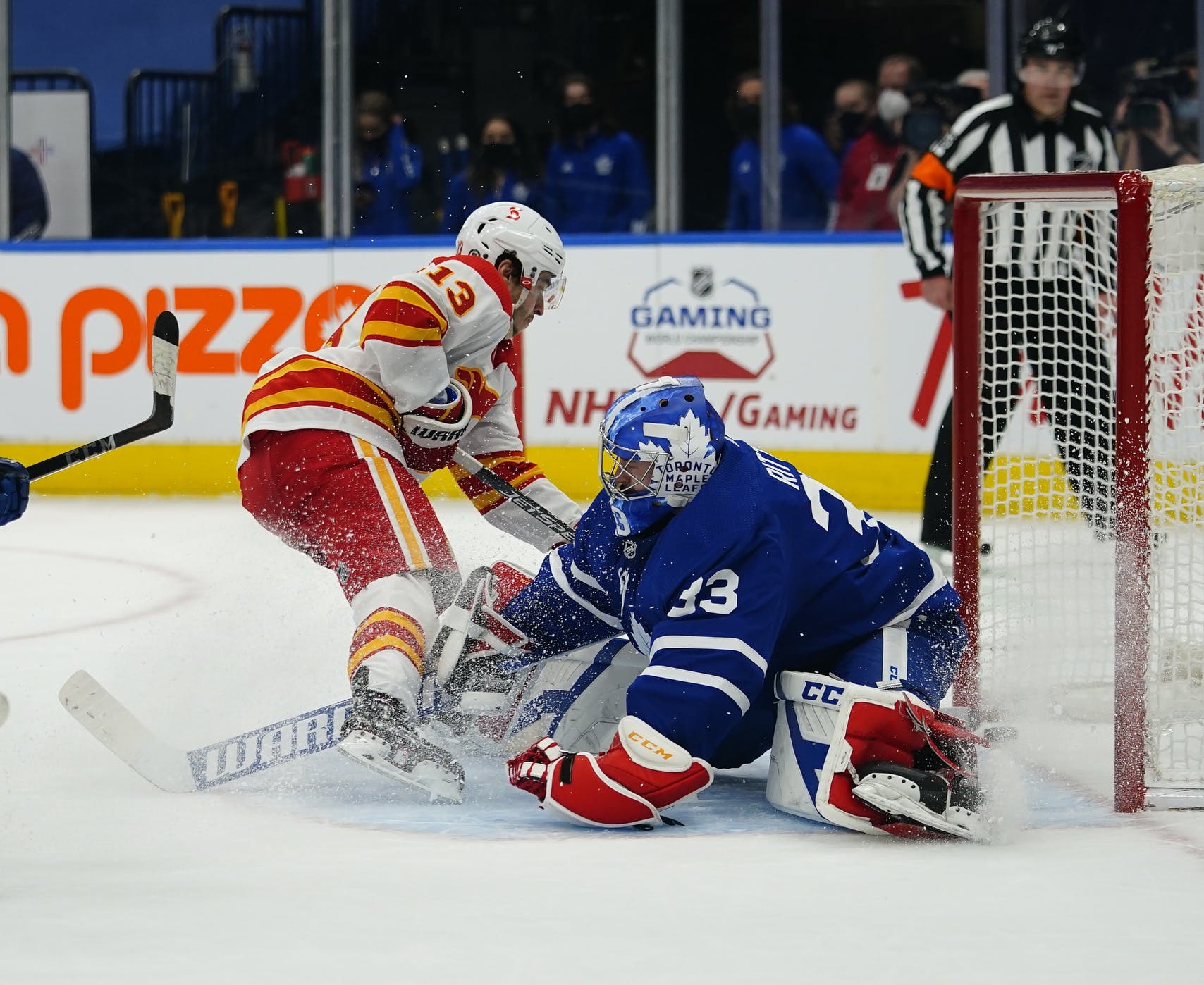 By Scott Maxwell
1 year ago
It’s that time of the season, where the Leafs have a playoff spot all but secured, and the games are absolutely meaningless aside from seeding. And yet, we still find ourselves getting worked up over losses, particularly on this five game losing streak the Leafs find themselves in. We look back on it and laugh because it was either worth it in the end, or it wasn’t even close to the pain we’d have to deal with later in the season, but it’s still easy to get sucked into the emotions and get mad at a 3-2 OT loss or a 6-3 loss.
If you want to save yourself a lot of stress until the playoffs, I have a way to help. It’s something I’ve done for the past few years after putting up with the 2017-18 Leafs during that January to March stretch where they were mediocre and frustrating to watch. It’s allowed me to watch and enjoy the games, and still be critical, but not be overly worried about the team and stressed out over a single loss.
That said, this is not me telling you what you can and can’t do. These are human emotions we’re dealing with, so you’re allowed to react to wins and losses however you feel like and not feel bad for it (as long as it isn’t violent obviously). This is more me talking about how I look at single games at this point when the result itself doesn’t matter to help not get me so worked up, in case other people would also like to know.
The first thing to note is that it’s still okay to get worked up about the game. This is still sports, and if you were to just abandon emotion and resort to nihilism, it wouldn’t really be fun. Despite all that I’m about to tell you, I’ll still tweet stuff that probably isn’t the most rational and is clearly me reacting to a situation without much thought.
I usually find myself in that purely emotional reactionary state for 10-15 minutes after the fact before I start to calm down. Sometimes it’s a goal against or a dirty hit that has me mad, or sometimes it’s the end of the game (or the point where the game is pretty much over). But, if you allow yourself that window where it’s okay to react, then you can eventually cool down and usually by the time the game is actually over, you’re a little bit more rational.
Alright, enough about psychology, you’re reading this because you’re a sports fan. At this point of the season, it’s important to remember that the results don’t really matter. You can pretty much ignore it, in fact. The points still influence the standings, but let’s be honest, we know this team is going to make the playoffs, and we know they’re the best in the division, so them losing a game doesn’t really hurt them as much as we think it does.
That’s not to say you just ignore the games entirely either. Just the score. What’s important is that they’re playing well, and because of the randomness of the game, winning and losing doesn’t always signify that. It’s not as easy as staring at the Deserve to Win meter, but it’s along those lines. Are they driving play? Are they generating scoring chances? Are the players that should be scoring scoring? Have any players been playing worse than expected? These are all still important questions to look at within a single game that still have some meaning and allow you to be critical and still feel like you’re watching the games for a reason.
What’s important to note as well is the long term trends of the team. This is still where you can react emotionally, but you just treat a 5-10 game stretch with the same emotion you’d treat a playoff game, or a regular season game with a playoff spot on the line.
Take the Leafs current stretch of play, for example. Since March 4th, the Leafs have a 10-9-3 record. Not the worst, but that’s still more losses than wins, and it’s magnified by 1-6 and 0-3-2 stretches. Despite the fact that the playoffs are a lock for the Leafs, that stretch still feels like it’s a bit concerning and might be an indication that this is an average team.
However, they’ve actually been quite dominant. In this 22 game stretch of the season, the Leafs have been outplaying their opponents on a pretty consistent basis, as only six games this season have they had a game with an xGF% of less than 55%. Not 50, 55%. They are the second best in the league over that period with 57.48%.
So, then what’s the problem with the Leafs? Why are they so average on the scoreboard? That answer is easy… goaltending. More often than not, if your team is playing well and not winning, it’s goaltending. Either your goalie is playing bad, or your opponents goalie is good. It happens, there’s not much the Leafs can do about it besides keep on doing what they’re doing and eventually the bounces will come.
That’s one of the biggest reasons why you probably should ignore the score for the most part at this point of the season. The wins and losses aren’t going to drastically impact the team, and more often than not when they lose, they play well, and it’s usually because of goaltending. I know it’s easier to get worked up, and say it’s because of character or The Will to Win, but usually it’s goaltending, and the most you can do is hope it improves by the time the playoffs come around.
So, sit back, relax, and enjoy the last of this meaningless regular season hockey before the playoffs come around and we have heart attacks every other minute.
Uncategorized
Recent articles from Scott Maxwell