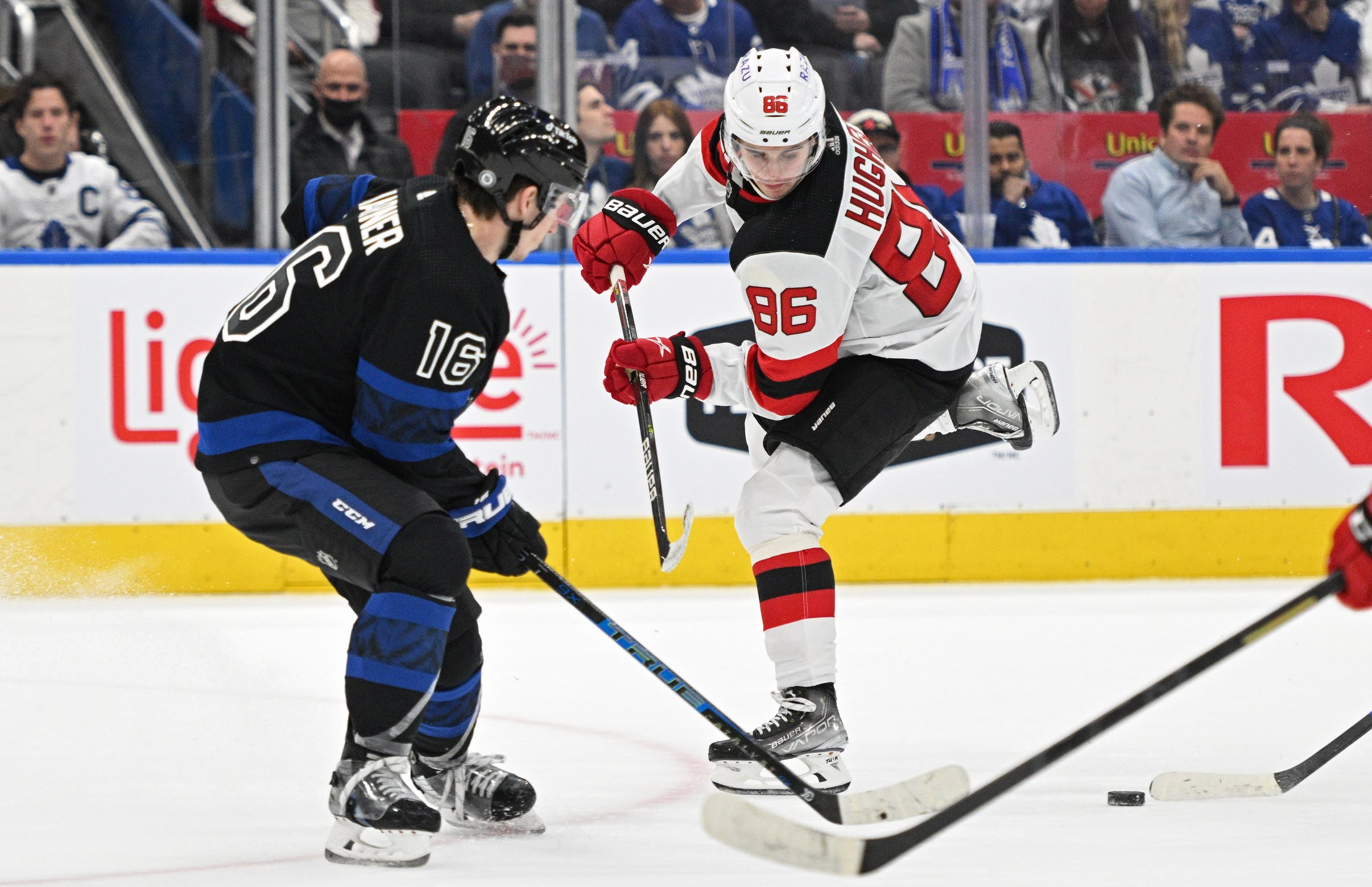 By Nick Alberga
16 days ago
Believe it or not, the New Jersey Devils are good again.
No, but seriously. They’re really good.
Winners of 10 straight games, the Devils (13-3-0) are in town to tangle with the Leafs (9-5-3) tonight at Scotiabank Arena. Not to be outdone however, Toronto has a lot to feel good about right now as well. After a 4-4-2 October, they’re 5-1-1 in November. In fact, these two teams are a combined 12-1-1 this month.
Furthermore, both squads are coming off road victories on Tuesday night. Michael Bunting notched two goals and an assist propelling the Leafs to a 5-2 win in Pittsburgh. Meantime, Jack Hughes tallied two and one as well as the Devils thumped the Canadiens 5-1 in Montreal.
The Leafs took all three against the Devils in 2021-22. This will be the the first of two meetings in six days, Toronto will visit the Prudential Center next Wednesday.
Time: 7 PM EDT (Sportsnet Ontario)
Starting Goalies:
NJD Vitek Vanecek – CONFIRMED (7-1-0, 2.17, 0.915, 1 SO)
@
TOR Matt Murray – CONFIRMED (1-1-0, 3.02, 0.900)
Projected Lineups:

Three Storylines:
POSSESSION TIME
In watching the Devils play quite a bit early in the season, there’s one thing that’s really stood out for me: They always have the puck. And that’s why it’s incumbent on Toronto to play with poise, patience, and urgency tonight. Everything they do has to be done with purpose, or they’ll be chasing the game all night long. When the Leafs are playing their game, they, too, possess the puck quite a bit, so this showdown should be fascinating on so many levels. Unsurprisingly, the metrics also check out on the Devils. They currently rank third in goals against (2.44) and first in shots on goal against per game (24.5).
MIX IT UP
This one’s simple: Make life difficult for Vitek Vanecek. Like the team in front of him, the Devils No. 1 goalie has been on fire lately. In his past eight appearances, he’s registered a 7-0-0 record to go along with a 1.40 goals-against average and 0.946 save-percentage. Similar to my comments about Casey DeSmith over the past week, Vanecek’s not the second coming of Martin Brodeur. This guy’s beatable; get to him early and often. As mentioned above, the Devils are stingy, so the Leafs will have to be efficient.
MATTHEWS VS. HUGHES
What better than a matchup against a fellow American to get Auston Matthews going? In quick order, the 21-year-old Hughes, who spent a big chunk of his childhood in the GTA, has been ascending into superstar status.
Meantime, by his standards, Matthews has had an up and down start to his season. That said, he’s still picking up points. The reigning Hart Trophy winner has one goal in his past five outings and seven in 17 for the season. At this current pace, he needs 53 goals in his final 65 games to tie last season’s mark of 60.
BETTING:
Courtesy our friends at PointsBet Canada, here’s tonight’s lines & odds:
(As of Noon EDT)
Prop Play:
Over 6.5 (-131) | Auston Matthews Anytime Goal (+100)
Editorials
News
Recent articles from Nick Alberga