‘I don’t think it’s acceptable if we miss the playoffs’: Marlies GM Ryan Hardy expects to compete this season 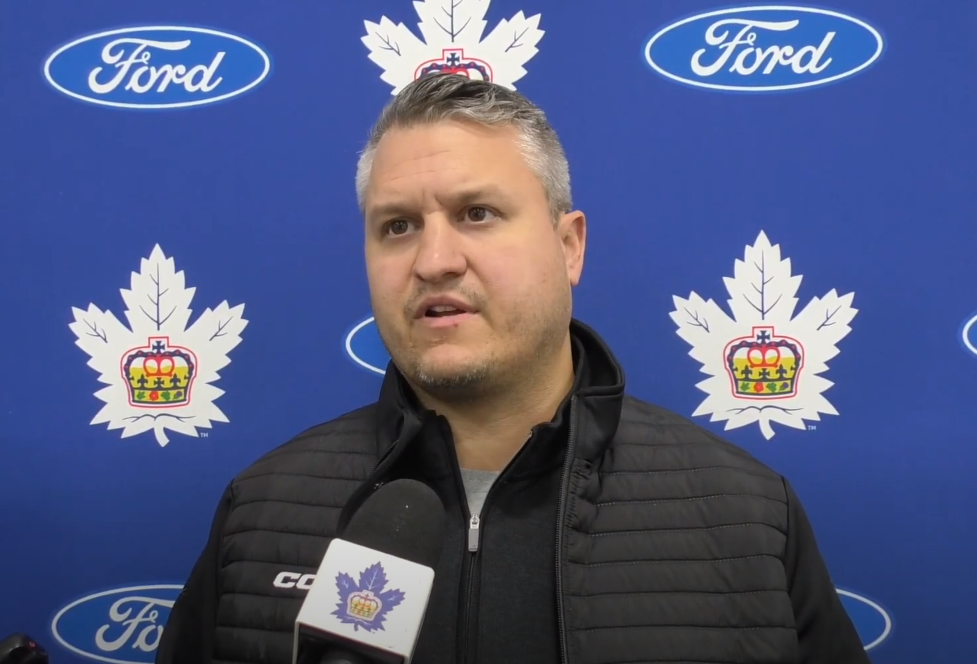 By Nick Barden
3 months ago
“It was a learning year for sure, but I think that was by design and now I think we’re ready to take the next step.”
Toronto Marlies GM Ryan Hardy didn’t mince his words on Thursday when addressing the media to discuss what his vision is for this season.
Last year was a disappointment to many surrounding the AHL club. Although there were some steps taken in development, with players like Bobby McMann and Curtis Douglas receiving ELC’s from the Maple Leafs, the bigger picture was a bit of a blur.
“I think a great degree of soul searching for all of us that went on, with sort of the way last season ended, which if we’re honest with ourselves, we were bleeding that way for a while.” Hardy said one day before Toronto’s season opener. “And then what happened at the end, happened at the end. You can reflect a ton on all the days before, where we could’ve found one point when you miss out by a point. But the reality is that the fault lines were the fault lines, and they were there, really, the whole time.”
The Marlies failed to make the playoffs for the first time since 2011 — a feat that didn’t seem possible at the beginning of last year with the team they had put together.
Now, 365 days later, the team has high hopes, and it’s not just to make the playoffs.
“I don’t think it’s acceptable if we miss the playoffs. I expect to compete in the North Division. I expect to compete and go deep into the playoffs with the group of guys we have.” Said Hardy.
Entering a brand new season comes with plenty of question marks. For the Marlies, they have a really sound forward group with the likes of Kyle Clifford, Adam Gaudette, Pontus Holmberg, Alex Steeves, Joey Anderson, and Nick Abruzzese.
The defence, on the other hand, is a bit more intruiging.
There’s only three players on Toronto’s back-end who’ve played pro games; Victor Mete, Filip Kral, and Mac Hollowell. The rest, which include William Villeneuve, Marshall Rifai, and Mikko Kokkonen have no professional experience whatsoever.
“I think we gotta be patient with our defence,” Hardy said. “I think we have a lot of good depth on defence, we have a lot of good guys that are American League calibre. Can enough guys rise into the top four and be able to take on big minutes against high quality of competition? I think that’ll be the great question I have.”
Aside from both the forwards and defence, there are a lot of fascinating individual stories to look at entering this year.
Atop of the massive list is Nick Robertson, who was the final cut made by Maple Leafs head coach Sheldon Keefe before the NHL season got underway. Many believe the 21-year-old would’ve made the team if it didn’t come down to who needed waivers, but alas, here we are.
Hardy was asked about Robertson on Thursday and he believes that the forward could be in the final stint of AHL hockey.
“Nick is on the cusp,” stated Hardy. “I really liked the way he’s come here. Obviously we’d be lying to ourselves if we said there wasn’t disappointment for him to not be in the lineup last night (Wednesday) for the Leafs and to be back here. But there’s so much opportunity for him.
“He’s right there and I’m confident that the next time his opportunity comes in the NHL, that it might be the last time we see him here.”
If there’s any name to remember this year, it’s Marshall Rifai. The undrafted 24-year-old spent the last four years at Harvard and has made a good impression early on within the Maple Leafs organization.
And if my calculations are correct (they usually are), it looks like he’ll be in the Marlies’ opening night lineup on Friday in Rochester.
“I think it’s a guy that’s stock is high right now. He’s riding high.” Said Hardy. “His skating is world-class. I don’t know how many players in this building, on either side that we have, that are better skaters than Marshall Rifai. He’s brought a lot of bite, he’s got a competitive streak to him, he’s got some nasty, he wants to defend.
“We challenge him to keep it clean with his puck movement and just focus on his defending, his skating, and the physicality. So far so good.”
The final story — that will continue to evolve over the next few weeks — is the leadership and who might be the next captain of the team since Rich Clune has retired. There are a number of leaders within in the group, like Clifford, Joseph Blandisi, and Logan Shaw to point out a few.
Obviously, the captaincy isn’t on the forefront in terms of thoughts, but all three of those players bring a lot to this team.

“I think that Logan Shaw, even if we were sort of prepared for waivers, whatever carnage came of that, I think Logan is a big man. 6-foot-3, he’s strong, he can play a heavy game, which quite frankly we need within our group. As I said last year, I thought there were many times where we got pushed around, and so I think Logan can play that style. He can kill penalties, he can win faceoffs, he’s an excellent person, a great leader for us, and he can play with all of our good players.”

“Blandisi came in last year on the PTO and then we converted that to a contract. He had been coming off two knee surgeries, so he was never in the shape that he needed to be in, or that he wanted to be in to prove what he could do. And I think that he was a great player for us down the end, he really helped us. But he came in this year in much better shape, just by virtue of being able to work out. When he and I went through the contract negotiation, he just said to me, ‘Hey, this is where I want to be. I’m from Toronto, I want to help develop Maple Leafs, I want to help the Marlies win, and I love being here. I’ll do whatever you need me to do.’ So, having that mentality in veteran players is huge.”

“For Clifford, we talked about it yesterday within our group — he has Stanley Cups. He knows what it takes to win, he knows what it takes to prepare, he knows what it takes to do hard things that aren’t always glorified but help the team win. And so his presence is essential and we’ll rely heavily on those guys (Shaw, Blandisi, and Clifford) for sure.”
Marlies head coach Greg Moore is likely the person who makes the decision on who’d be the next captain of the team. But he didn’t have an answer to that question when asked about it on Thursday.
“I am not going too quickly to assume anything.” Said Moore. “We have a lot of guys that are here this year that are mature players that have a ton of experience, whether it’s NHL experience or years played. I’m interested to just see how the team comes together, how the dynamics form in the next couple weeks to a month and go from there.
“I mean, I obviously have thoughts of who, like a nucleus would be, but I want to see who’s going to rise to be the guy.”
But as much as all of that matters, one of the most important aspects to this season is doing damage, both in the regular season and the Calder Cup playoffs. For the players. For Moore. And for Hardy.
“Now I think we’re ready to take the next step.”
News
Recent articles from Nick Barden