‘I think he’s got a future in the league’: Holmberg earns high praise after first game in Leafs lineup 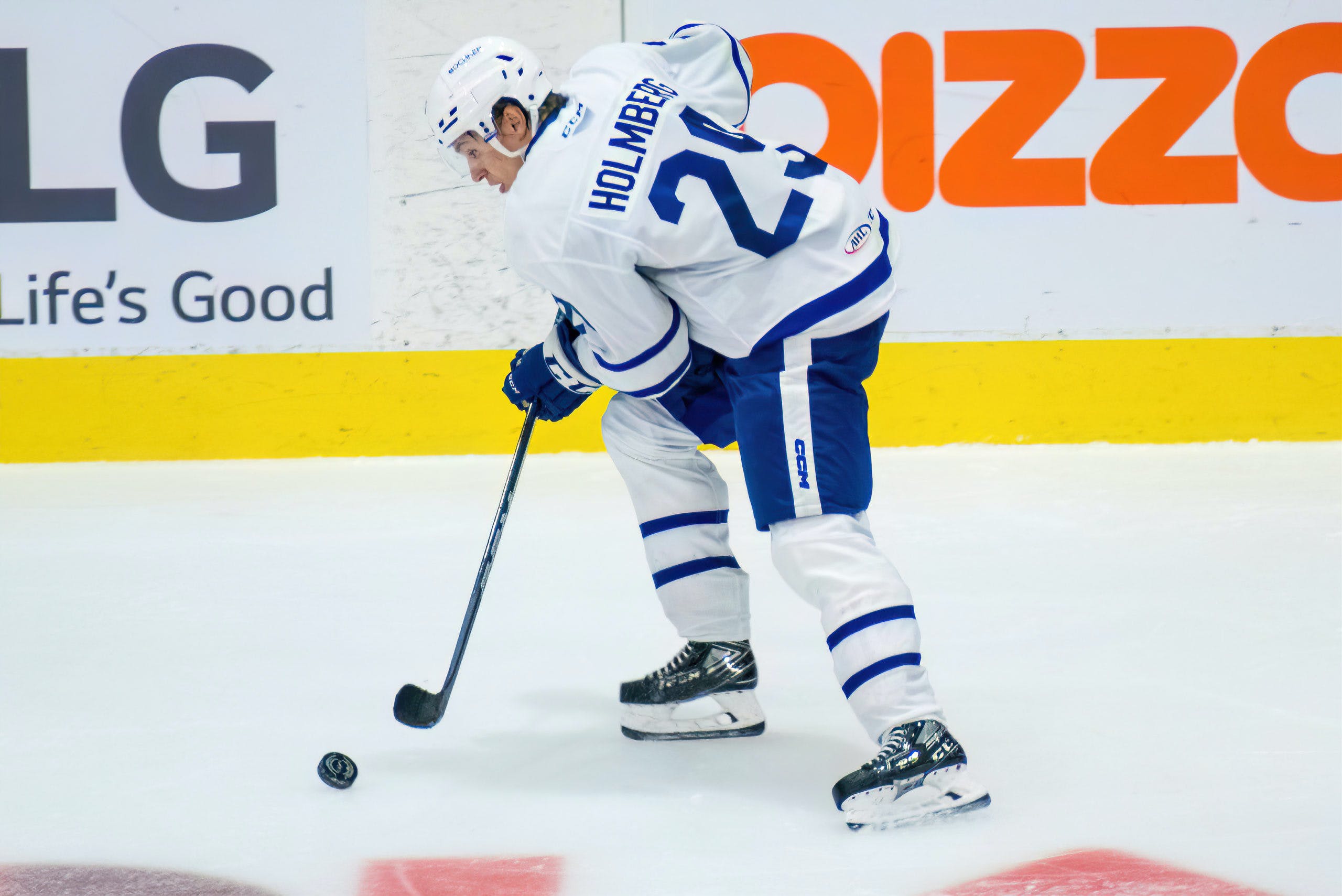 By Nick Barden
19 days ago
Pontus Holmberg stepped onto the ice at Scotiabank Arena for the first time ever on Wednesday, and he left it hoisting his stick up in the air after a Maple Leafs win.
Take a deep breath.
The 23-year-old — who was making his NHL debut on Wednesday night — was doing so at an incredibly tense time in Toronto. But for Holmberg, it was all about focusing on what he does right, and he accomplished that vs. Philadelphia.
“I liked when the puck got on his stick,” said Maple Leafs head coach Sheldon Keefe after Toronto’s 5-2 win on Wednesday. “I thought, at times, he looked a little like a guy playing in his first game and trying to get comfortable.
“The number of penalties that there were really took away from any rhythm in his game, but I really like him as a player and he’s a guy I’m happy to get in here and get him involved.”
The Maple Leafs were 4-2-0 after leaving Winnipeg for their western road trip, which many would describe as a good start to the season. But things took a horrible turn when the team couldn’t find a win in Vegas or California.
Toronto arrived back home with four of a possible 10 points, and also with many wondering what might happen if the ship doesn’t turn itself around.
We might not have to discuss that after all.
Wednesday was a big night for John Tavares, who had four points including a hat-trick. It was a great game for Auston Matthews. He’s slowly putting pucks into the back of the net. The biggest highlight might be Ilya Samsonov, who now has five wins in seven games and a .920 save percentage with the Maple Leafs.
But the story that hit closest to home on Wednesday night might have to be Holmberg, the way he played, and the praise earned from Keefe after the game.
“From what he’s shown me, I think he’s got a future in the league.”
The 23-year-old only played 10:01 against Philadelphia — the lowest of any Leaf on Wednesday — though he made the most of it. Holmberg centred Toronto’s third line alongside Pierre Engvall and Calle Jarnkrok: an all-Swedish line.
Being the natural-born centre that he is, Holmberg was great at both ends of the rink. In the defensive zone, he was making plays to gain possession and get the puck out of the zone. In the offensive end, the 23-year-old played a key role in managing the puck and where it went.
He even got a shift on both the power play and penalty kill. And although that might not seem like much, it’s a step for a rookie and it’ll be a big positive that he can take away in his first NHL game with the Maple Leafs.
Holmberg played a total of 8:40 at five-on-five and finished with a 58.33 CF%, according to Natural Stat Trick. The 23-year-old also had a 60.45 xGF% and limited Philadelphia to only one scoring chance, while he helped accumulate five against the Flyers.
Not too shabby for his first NHL game.
What’ll be most fascinating is seeing what happens with him next. It seems like the 23-year-old has earned the trust of the coach. And if in fact he’s achieved that, there’s likely going to be plenty of opportunity for him in the future with the Maple Leafs.
“To get him here and get him involved is really good.” Keefe said. “We’ll see as each day goes how it fits and how it all works, but we think we’ve got a good player there that’s going to play a role for us this year.”
Statistics via NaturalStatTrick.com & NHL.com
News
Recent articles from Nick Barden