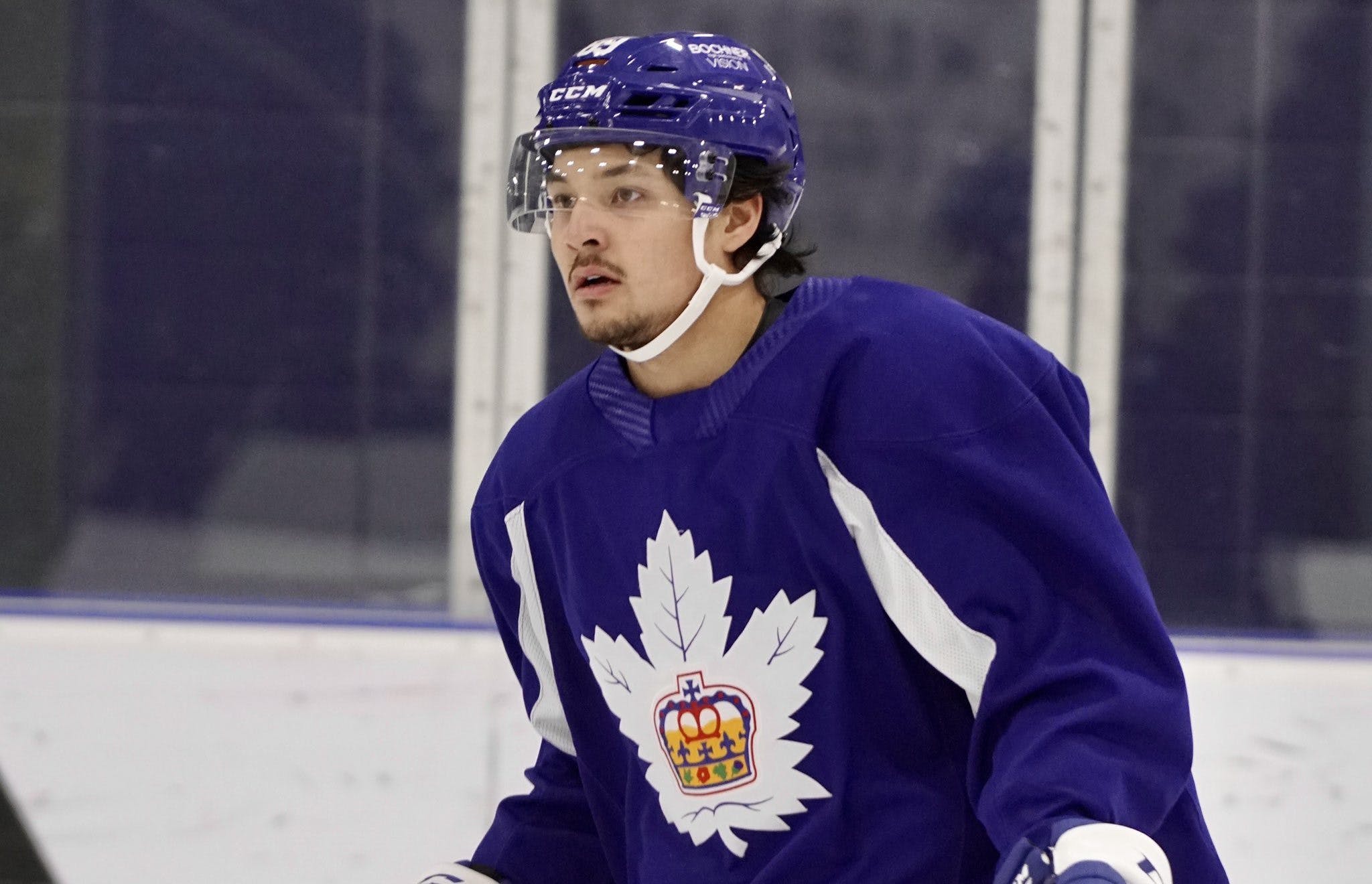 By Nick Barden
10 months ago
Nick Robertson is trying to make 2022 his year.
30 days after the year began, the 20-year-old skates in his first full-contact practice with the Toronto Marlies.
“It’s good to be out there with the guys,” said Robertson on Sunday. “Definitely a different type of burden I have to deal with now is getting back into contact. So, I felt pretty good overall.”
Robertson skated with the Marlies on Thursday in a red non-contact jersey, but today was a little bit different. He was welcomed back in a massive way.
During a drill on Sunday where it was two players vs. one in one end of the rink, Bobby McMann threw a massive hit on the 20-year-old.
Robertson and his competitiveness, though, bounced right back up, acting like it didn’t happen.
“It’s good. I mean, it’s kind of expected,” said Robertson of the competitiveness of his first practice back. “A hit’s a hit and I look forward to it, so it’s no big deal and just go from there.”
The 20-year-old also skated with Joseph Blandisi and Semyon Der-Arguchintsev on a line.
Once practice concluded, the Marlies had an extra 30-40 minutes to do anything they wanted. Robertson spent most of that time skating back and forth, blue line to goal line, over and over.
For part of it, he was joined by captain, Rich Clune, but even after that, Robertson continued to do it.
“Relentless, consistent,” said Marlies head coach Greg Moore on how he’d describe the 20-year-old. “I mean, even if you saw today, at the end of practice, for the 30 minutes of free ice, he literally skated himself for 30 minutes. Not a single coached asked him to do it, told him to do it. [Rich] Clune jumped in with him. He (Robertson) is a very driven young man and it’s good to see him in a lot of ways, do things that show leadership as well. The maturity it takes to do that, to be ready to play when the time comes.”
Toronto’s next game is on Wednesday night in Grand Rapids. Although Moore didn’t give a concrete answer on whether Robertson would play, the coach did say he’s “hopeful.”
“Today was day one of team practice,” said Moore. “I don’t wanna commit to anything certain. We’re hopeful. But he did look really good today.”
Robertson has had a difficult start to his pro career. A knee injury at this time last year put him out for four weeks, a concussion towards the end of the Marlies season had him out for a bit, and now a broken leg which put him out for 10 weeks.
But he’s recovered from it all and is excited to be back.
When you’re off for a long period of time, you’re away from the team a lot, which makes players feel distant. But it allows someone to take a step back and learn about themselves.
What were some of the things that Robertson learnt?
“I think it’s that I love the game,” the 20-year-old said. “I think when you’re playing a lot, you’re kind of worried about the result and success. But I think I just kind of sat back and just realized how much I enjoy the game. Even just being out here in practice, it just felt good to be back there. I’m not worried about the games, not worried about scoring or what-not. I just missed the game in general, and obviously I think my mindset will shift as I come back, but now it just shows how much I love the game.”
When the 20-year-old was injured, he spent a lot of time with a knee scooter. There wasn’t much he could do.
But with the same mindset he’s always had, Robertson was ready to get back to work the day after he was injured back in October.
“I think I just have to adjust and be present,” Robertson said of how he approached his rehab. “I don’t have time to dwell on the injury. The next day after getting injured, I gotta get back into it and do what I can. So I think that was just my mindset the whole time and I think it’s helped with my progression.”
How will he approach this year, though?
“The whole year of 2021 was pretty much downward and upward,” said Robertson. “Now that the new year, 2022 is here, I’m trying to make this my year and move forward and kind of put the injuries past me and do what I can do.”
Uncategorized
Recent articles from Nick Barden