In Robertson’s absence, Toronto’s depth stood up against Kings 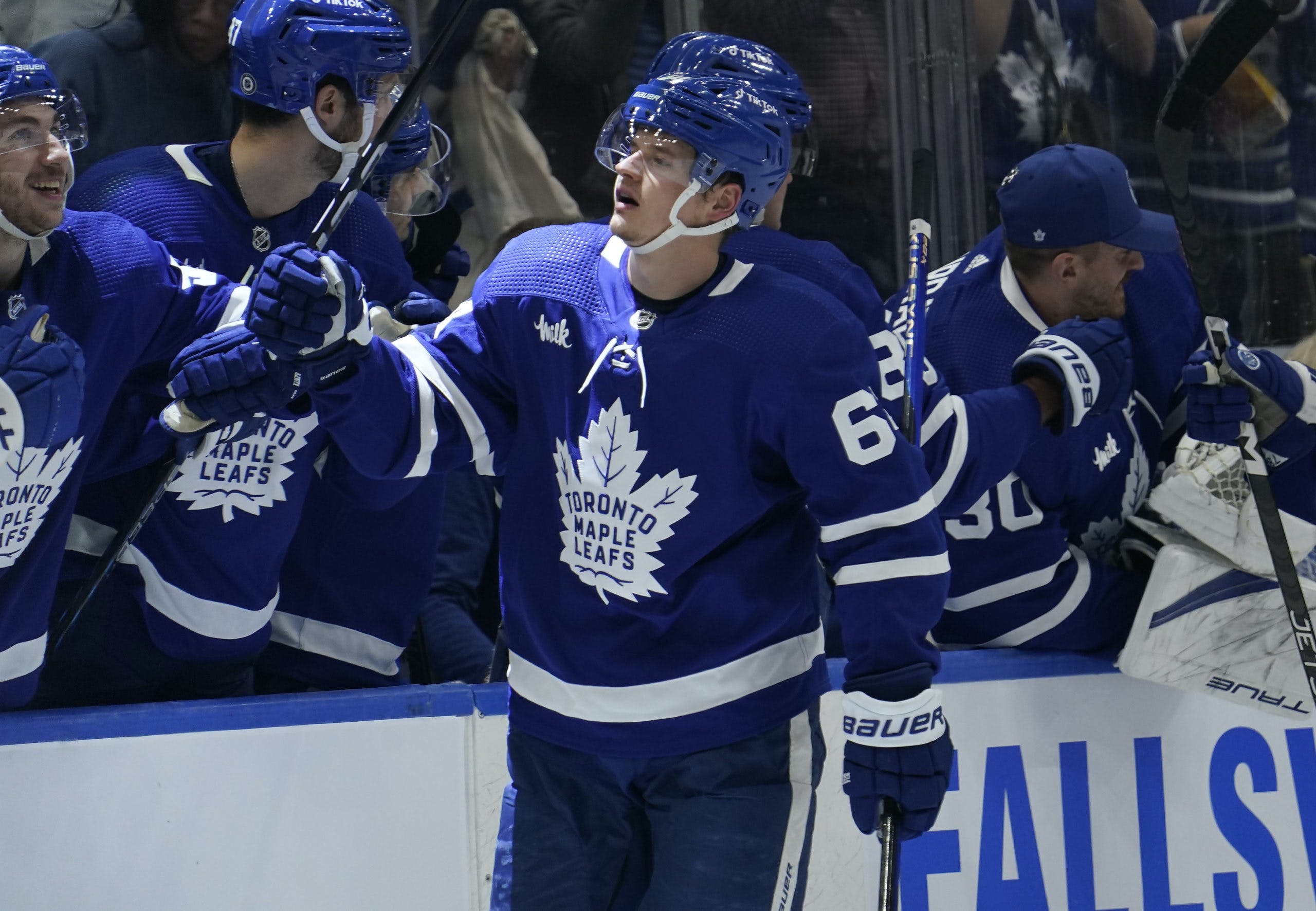 By Steven Ellis
1 month ago
Heading into Toronto’s game against the Los Angeles Kings on Thursday, Pierre Engvall and David Kampf combined for a whopping six goals this season. So, like, almost a night’s work for Tage Thompson.
But after a challenging first period that saw the Maple Leafs dominate possession but with nothing to show for, it was two of Toronto’s bottom-six forwards that got the scoring started. Engvall’s goal came on the power play early in the second, while Kampf scored before Engvall’s name had even been announced in the building.
The usual cast of characters showed up – namely William Nylander and Mitch Marner, who extended his point streak to 21 games. But it was the just 40 seconds apart by two third-liners that helped spice things up for a team chasing its seventh win in the past eight games.
And, if history has shown anything, the Leafs typically do alright when either of that two find the back of the net. The Leafs are now 14-0-1 when Kampf scores in his two years with the club, while Engvall has helped his team to a 16-2-1 record. Neither player puts up a ton of points, but they’re a better team when they do.
The Leafs eventually won the game 5-0, but the attention was more focused on the status of Nick Robertson. The winger left the game with a shoulder injury in the first after going hard in the boards following a hit from Kings defenseman Matt Roy. After the game, coach Sheldon Keefe said Robertson will miss significant time, which is a huge blow for a player who’s been injured in each of his three pro seasons with the Leafs.
So even though Robertson had been closer to a depth guy to begin with, another injury in the system means the Leafs will continue to count on the efforts of those near the deep end.
Toronto’s bottom six has had a rotating cast of characters all season long. Having depth they can swap in and out on a moment’s notice is a big thing, and something they’ve missed in the past. The Kampf-Engvall-Alex Kerfoot line won’t wow you with its flashy skill or lavish offensive numbers. But they can be hard to play against, hold their own defensively and inject some life every now and then. And in a game that the Leafs couldn’t get anything going early, that ended up making a difference.
Kampf, in particular, has received tremendous praise over the past two years from his teammates, and it was no different on Thursday.
“I was really excited for him,” Marner said. “I keep talking to you guys about that. I really think he does a lot that goes unnoticed. Everyone in this locker room really loves Dave.
“He’s the first guy over the boards every time on the penalty kill, to win a faceoff against usually the team’s best faceoff guy and comes out with the majority of the wins.”
The Leafs might also need to worry about a potential suspension for Engvall, who was ejected for hitting former Leafs prospect Sean Durzi in the back of the head. A fine seems more likely, but it was an ill-timed move by a player who should be fighting harder to keep his spot in the lineup.
Regardless, the Leafs came out with one of their best results of the season, with the club clearly excited after the fact while celebrating with Justin Bieber in the changeroom. And as the team continues to play with house money, winning game after game no matter who’s in the net or the opponent at large. But when the depth starts producing, the results tend to lean towards the positive.
Just keep it rolling.
Editorials
Recent articles from Steven Ellis