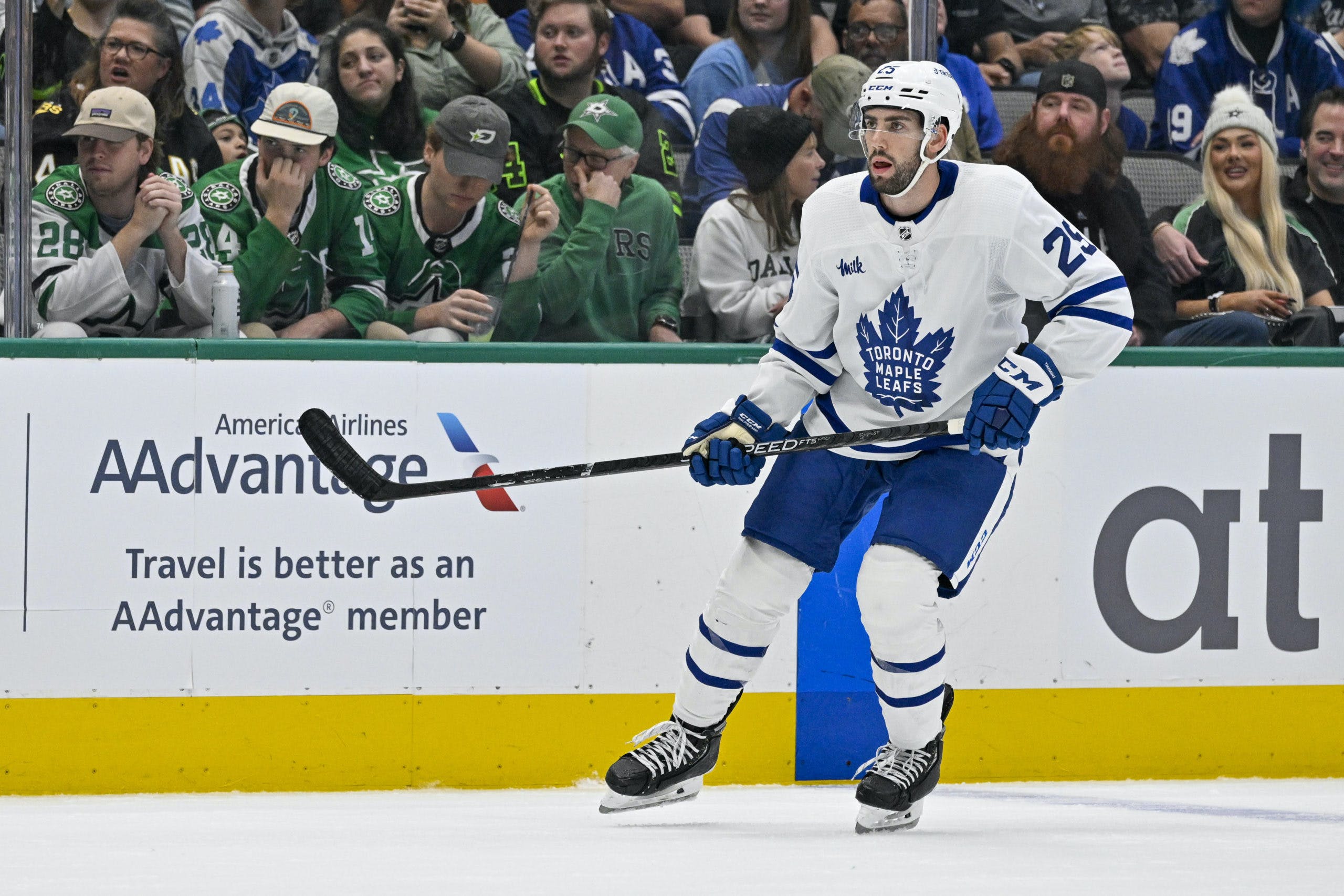 By Nick Barden
1 month ago
The Maple Leafs’ decision to acquire Conor Timmins may not have been a shot in the dark, but it was pretty close to it.
This trade — when it occurred — was quite fascinating for both sides. Arizona received Curtis Douglas, a player with a lot of size who could be very compelling if he’s able to refine his skating. Toronto, in return, obtained a defenceman who once had a lot of promise.
That potential still remains if he’s able to stay healthy, and if the Maple Leafs are able to tap into the 24-year-old’s resources.
“I think it’s at a good spot,” said Timmins of his comfort level after Tuesday’s game. “I still have room to grow, I’m still pretty young, and have a lot of game to work on. And I think I can keep improving, but I’m happy with where I’m at right now.”
Tuesday night was arguably Timmins’ best game throughout his early journey in the NHL. Coming into the matchup against Anaheim, the 24-year-old had two multi-point games in his career, but has never accomplished the feat of three points in a single game.
That changed, though, on Tuesday night.
Assisting on Toronto’s first, second, and third goal, Timmins was able to showcase what he could bring as a full-time NHLer. A puck-moving and play-making two-way defenceman.
The first goal Timmins assisted on was as good, or even better, than the rest. Credit to Pierre Engvall for carrying the puck up the ice like he did, but this goal doesn’t happen if Timmins doesn’t make the pass through the middle of the rink.
The 24-year-old hits Engvall at the perfect time to allow him to continue his speed through the neutral zone and get past the defenders before finding Alex Kerfoot for the goal.
A very smart play by Timmins to spot the forward and put the puck right on his stick, even as he’s under pressure by Jakob Silfverberg.
“I think he’s done a nice job, I’ve liked a lot about his game.” Maple Leafs head coach Sheldon Keefe said of Timmins after Saturday night’s game against Calgary. “I think he’s done some good things for us despite being a guy that hasn’t played a lot, hasn’t been around our group a lot, hasn’t had a lot of practice time to really get comfortable.
“He’s playing with a new partner, in [T.J.] Brodie, and new teammates and all these things. Lots going on for him as a guy that’s still trying to make his mark in the league. But, we’ve been really encouraged with what we’ve seen.”
What stands out to me about the 24-year-old’s game is his patience with the puck. As you can see in John Tavares’ goal above, Timmins receives the puck and doesn’t rush to make the quick pass.
Instead, he waits and that allows Mitch Marner to open up into a great position to accept the pass. That, in turn, results in Marner finding Tavares, and him putting the puck into the back of the net.
Timmins’ third assist came in the second period when he made a pass to T.J. Brodie, who then put the puck on goal. As it fluttered towards the net, it bounced off an Anaheim player in front and found its way past Lukas Dostal.
There are a lot of benefits to playing alongside Brodie, especially for a younger defenceman such as Timmins.
In the four games that the 24-year-old has played, he’s been able to have a 55.79 CF% at five-on-five, as well as a 62.10 xGF%. Timmins and Brodie — early on as a pairing — have been able to limit the chances against while pushing for more time in the offensive zone.
He’s even found himself a spot on the Maple Leafs’ second power play unit, which not only shows how much confidence Toronto’s coaching staff has in him early on, but also what he can bring offensively as well.
Timmins — though it’s early in his career with Toronto — has averaged 15:32 of ice time. That average is higher than both Filip Kral and Mac Hollowell during their time up with the Maple Leafs.
There’ll be some questions to be answered once Jordie Benn returns to full health for the Maple Leafs, which is likely to be very soon. However, early on, Timmins has made a tough case when it comes to removing him from the lineup.
Statistics via NaturalStatTrick.com & Hockey-Reference.com
Editorials
Recent articles from Nick Barden