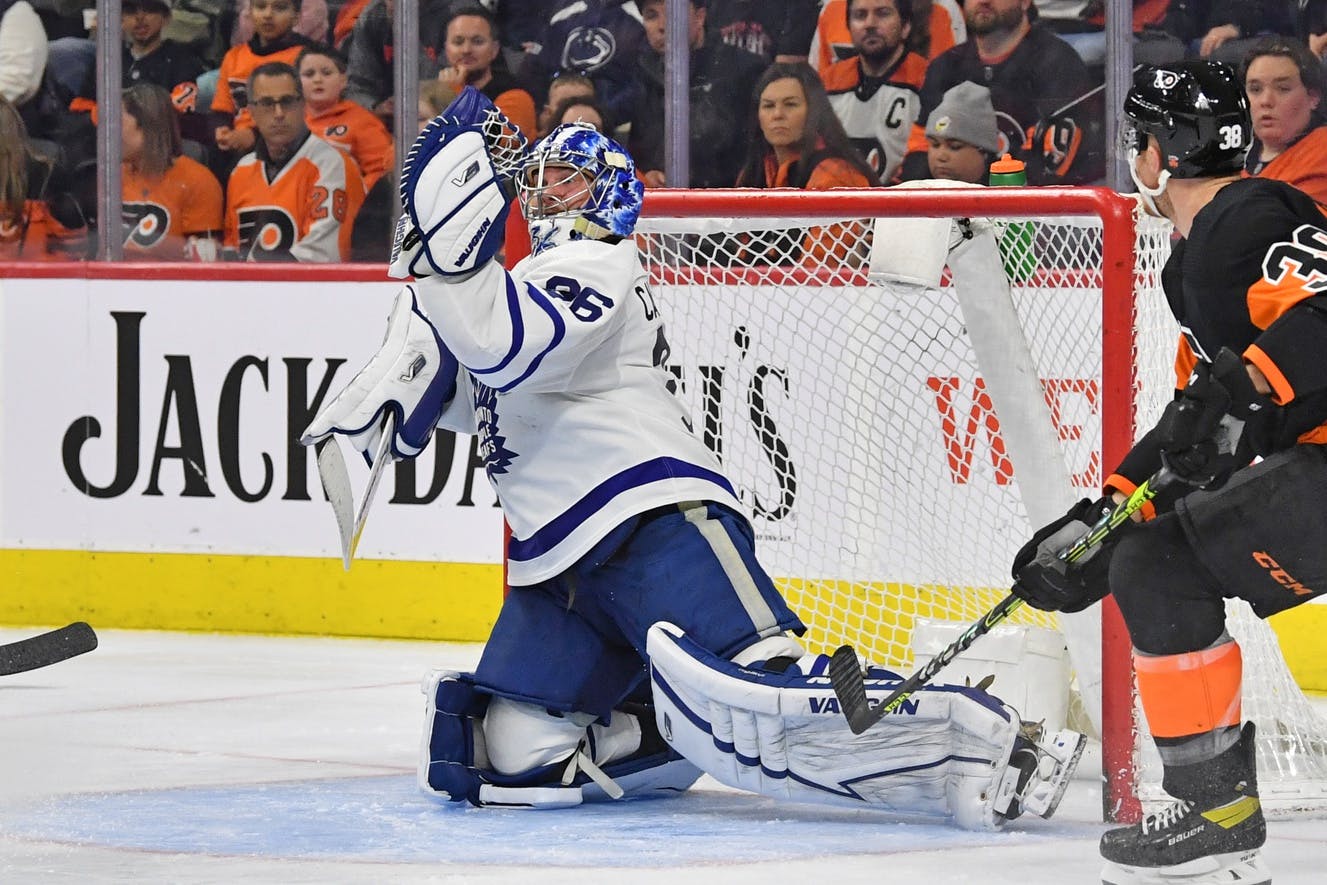 Photo credit:Eric Hartline-USA TODAY Sports
8 months ago
PHILADELPHIA — You could see it coming from a mile away.
The Toronto Maple Leafs have developed a bad habit of playing poorly against teams that are further down in the NHL standings lately and the Philadelphia Flyers looked like they were going to be the next non-playoff team to hand them a loss.
The difference this time was Jack Campbell, who made 11 of his 29 saves in the first period to help his Maple Leafs defeat the Flyers 6-3 on Saturday in the goaltender’s first game in nearly a month.
“I definitely felt like myself, just having fun and competing and playing my game,” Campbell said. “There’s obviously some details [I’m] just going to keep cleaning up. But I really liked the game from the boys in front of me and I like my game and just going to keep building from it.”
Campbell last played a game on Mar. 8 but had played through four games with a rib injury. Bur even before the ailment, Campbell’s numbers were not only bad since December but he was making mental errors on the ice. Whether it was a low-difficulty goal from a long distance or giving up big rebounds in front of the net, Campbell didn’t resemble anything like the goaltender that won the Maple Leafs’ starting job last season nor the player who was amongst the best goaltenders in the NHL through October and November.
On Saturday, his teammates did not look great in front of him.
In the first period, they struggled to establish any pressure at the Philadelphia net and Campbell was thrust into duty.
“He just looked like Jack,” Maple Leafs head coach Sheldon Keefe said. “I loved the way he played tonight, that first period especially. The first ten minutes or so was a disaster by us in from of him.”
Although Philadelphia has their chances, Campbell shut the door and didn’t give up any rebounds. One save that stood out in the first period was a diving off-balance glove save of Flyers forward Morgan Frost.
“That save he made early in the game, those kind of things, that’s Jack at his best,” Keefe said. “Really good to see and great to have him back.”
The only resemblance to Campbell’s play before his injury hiatus was seen in his counterpart, Carter Hart, who allowed a couple of strange goals that helped the Leafs stay in the game.
Wayne Simmonds ended a 32-game goalless drought when he fanned on his breakaway shot yet the puck slid past Hart.
“Blackie [teammate Colin Blackwell] goes to me and he goes ‘that was the ugliest breakaway move I’ve ever seen’ and I don’t think he’s wrong,” Simmonds said.
Timothy Liljegren was the next Leaf to score an odd one when his bank shot along the end boards went off of Flyers defenceman Cam York’s skate and through Hart.
Those two goals allowed the Leafs to keep the game tied going into the third period and then the floodgates opened up.
Auston Matthews picked up his 51st goal of the season when he finished off an around-the-net pass from Mitch Marner.
Pierre Engvall scored a shorthanded goal that gave the Leafs the insurance goal they ended up needing to secure the win.
Morgan Rielly and John Tavares also had goals for Toronto.
The stats nor the scoresheet don’t really reflect what happened in the game, apart from the possession stats that showed the Flyers with a 71 per cent expected goals rate, per NaturalStatTrick.com.
“We didn’t play the game we wanted to play all night,” Simmonds said. “In the third period we got some timely scoring and that was ultimately the difference in the game. Ideally, we don’t want to repeat a performance like that.
Keefe is in a bit of weird spot because he can’t really crack the whip at his team following a win and the Maple Leafs have played well against playoff teams as of late with wins against division rivals Florida and Boston.
For the Maple Leafs, this game was about Campbell finding his game after a long layoff and although a .906 save percentage doesn’t scream big-goalie performance, he didn’t have much of a chance on any of the three goals he allowed.
Toronto didn’t improve their goaltending situation at the NHL trade deadline a couple of weeks ago and they lost Petr Mrazek to a regular-season ending groin injury on Tuesday. With limited sample sizes in rookies Erik Kallgren and Joseph Woll, the Maple Leafs have all their chips in the middle of the table behind a hand of cards that shows a Jack.
On Saturday night, Campbell won them a game they didn’t deserve and that’s exactly what they needed to see.
“He looked like Soup,” Matthews said of Campbell. “I thought he looked really good tonight and I think that’s just a really positive thing moving forward for us as a team and him individually.”
News