Jack Campbell may be playing his way onto the U.S. Olympic team 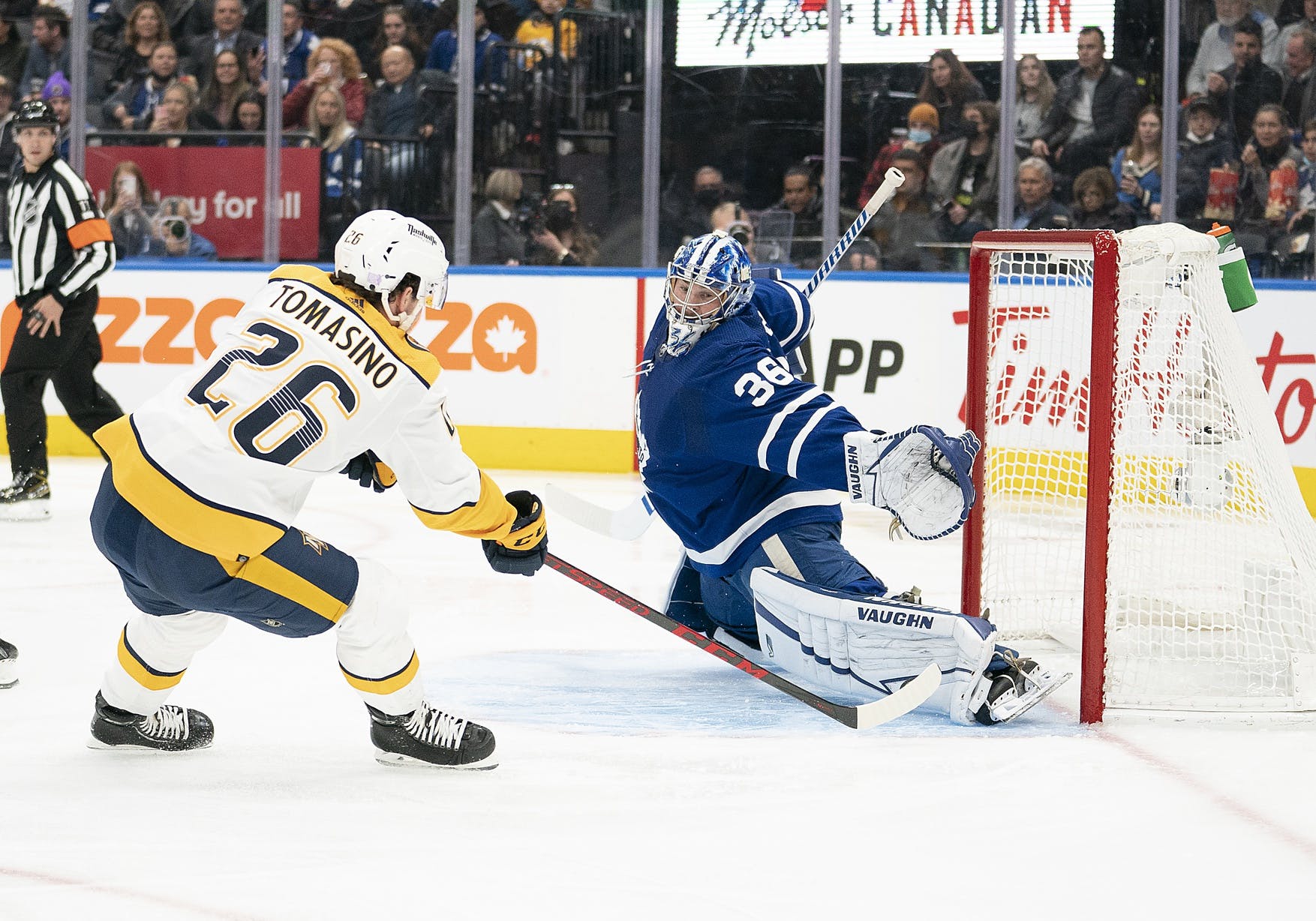 By Mark Norman
1 year ago
A quick look atop the NHL’s save percentage leaderboards is a trip down memory lane. In fourth is Danish prince @Frederik Andersen, the long-time Maple Leafs starter from 2016-2021. In second is @James Reimer, the affable homegrown talent who performed admirably behind some truly flawed Leafs teams in the early 2010s. Lastly, but also firstly, is @Jack Campbell, the guy who stole both Andersen’s starting job last year and Reimer’s status as the nicest guy in the league.
Unless you’ve been under a rock, you’ll know Campbell has been unbelievable for the Leafs this season, most especially during their current run of nine wins in ten games. Leading the league in save percentage and goals against average while placing second in shutouts, he is everything the Maple Leafs could have asked him to be this season. His spectacular start has some wondering if, come February, he may find himself sitting next to @Auston Matthews on a plane to China as a member of the U.S. Olympic team.
It’s something that even Jack would have thought unfathomable a year ago, when he started the 2020-21 season as the backup to Andersen, but his chances of being one of the three goaltenders taken to Beijing are now real and possible.

So how good are Campbell’s chances? Let’s look at the numbers for three main goaltending stats and separate the contenders from the pretenders.

@Connor Hellebuyck, Winnipeg Jets
Save Percentage (All): 0.914 (4th)
Save Percentage (5v5): 0.942 (3rd)
Goals Saved Above Expectation-per-60: 0.83 (2nd)
In terms of roster locks, Hellebuyck is considered by many to be the Americans’ de facto starter, and for good reason. Hellebuyck is a perennial Vezina candidate, having won the trophy in 2020 while finishing 2nd and 4th in 2018 and 2021 voting respectively. While Hellebuyck’s numbers don’t lead the pack this season, his track record speaks for itself.

Jack Campbell, Toronto Maple Leafs
Save Percentage (All): 0.943 (1st)
Save Percentage (5v5): 0.943 (2nd)
Goals Saved Above Expectation-per-60: 0.59 (3rd)
Campbell leads all American goaltenders (as well as the entire NHL) in overall save percentage, putting up a 0.943 save rate to go with his 9-3-1 record. That Campbell puts up these results while playing under the intense spotlight that is the Toronto hockey market speaks to his ability to thrive under pressure, which bodes well for an international tournament. But while Campbell’s results place him in special company, U.S. team builders may worry about his lack of experience, with just 100 NHL games to his name at age 29. The last time he represented his country was at the 2015 World Championships, where he put up a 0.825 save percentage in two games. It all comes down to how much value the U.S. brain trust puts in recent performance, because if they’re high on 2021-22 results then Campbell should be a shoo-in.
@Jonathan Quick, Los Angeles Kings
Save Percentage (All): 0.935 (2nd)
Save Percentage (5v5): 0.957 (1st)
Goals Saved Above Expectation-per-60: 1.24 (1st)
Many fans making their Olympic roster projects had left Quick off the team, and it’s easy to see why. Over the three seasons prior to this one, Quick had a combined 0.896 save percentage, which placed him 12th among 13 American goaltenders with at least 50 starts to their name. While some of this is likely the result of playing on a rebuilding Kings team, it did not stop many from speculating that the 35-year-old’s career was on a steep decline. This resurgence by the acrobatic netminder was unanticipated and has thrown his name back into the mix. Quick does have international pedigree in his favour as the starting keeper for the U.S. at both the 2014 Winter Olympics and 2016 World Cup of Hockey, but will that trump his underwhelming results since the last big international tournament five years ago?
@John Gibson, Anaheim Ducks
Save Percentage (All): 0.925 (3rd)
Save Percentage (5v5): 0.924 (6th)
Goals Saved Above Expectation-per-60: 0.12 (6th)
Another victim of playing for a bad team for quite a while, John Gibson has been relied upon by the Ducks to keep them in games for years. Case in point: Gibson’s 2018-19 goals saved above expectation of 26.9 was the highest single-season mark for any goaltender over the last three seasons. Cumulatively, his 16.8 GSAx since 2018-19 puts him ninth among all NHL goaltenders and third among American-born keepers (Hellebuyck – 32.8, Campbell – 20.7). Gibson last played for his country in the 2013 World Championships, where he put up a 0.951 save percentage en route to winning Bronze.

@Thatcher Demko, Vancouver Canucks
Save Percentage (All): 0.898 (8th)
Save Percentage (5v5): 0.925 (5th)
Goals Saved Above Expectation-per-60: 0.30 (5th)
Demko, age 25, has shown glimpses of being unbeatable at the NHL level and is considered to have a very bright future in the NHL. His 2021-22 results, however, leave much to be desired. What does not help is that the Canucks are a trainwreck this season. There’s potential here for Demko’s stock to trend upwards if the Canucks can string together a couple of months of excellent play, but that may be too much to ask from a team with a top pairing of @Oliver Ekman-Larsson and @Tucker Poolman.

The biased, unobjective Leafs fan in me says Campbell makes the U.S. Olympic team. The lover of cold, hard numbers in me also says he does it. Campbell has the numbers, the profile, and the disposition to be a tremendous addition to the American roster even as a third-string option. In a two-week tournament where the team that meshes best usually comes out on top, I cannot think of a better person to have in the room, bringing the guys together.
Uncategorized
Recent articles from Mark Norman