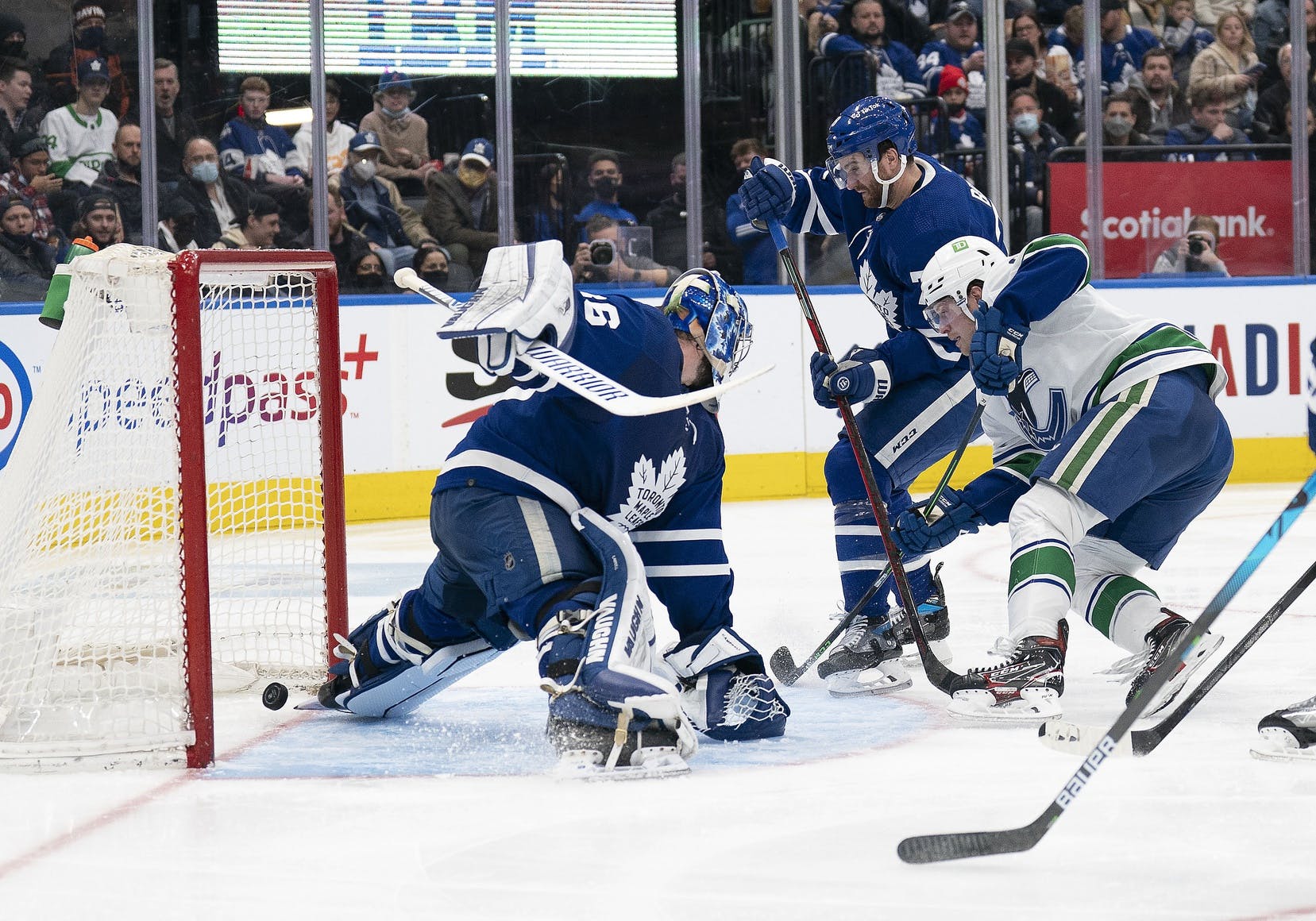 Photo credit:Nick Turchiaro-USA TODAY Sports
8 months ago
Jack Campbell really wanted to win this game. Not just for himself, but for Wayne Simmonds, who played in his 1000th NHL game.
But the affable Toronto Maple Leafs goaltender fell short of his standard, as he allowed five goals on 28 shots in a 6-4 loss to the Vancouver Canucks at Scotiabank Arena on Saturday.
“I know I got to get better for the team,’ Campbell said following the loss. “It’s disappointing not getting the win when the team played so well. But I appreciate the fans still supporting me and the team and I promise I’ll get out of it and get on a roll again.”
The Leafs were looking for a bounce-back performance after a disappointing 5-1 loss to the lowly Buffalo Sabres on Wednesday night.
They had a much better effort against the Canucks. All that was missing was another save or two from Campbell, who made his first start in a week after he allowed five goals against the Detroit Red Wings and had to be pulled from a winning situation.
“I guess I would say that I thought he looked comfortable in the net and we have to do a better
job of not letting those pucks hang around, those tips and stuff like that,” Maple Leafs coach Sheldon Keefe said of Campbell’s performance. “That first and fifth goal get by him pretty clean, those are the ones, that to me, are on our team and how we played in front of him.”
And then the others, they didn’t shoot them at the net, they’re just squeaking through.”
It’s not a ringing endorsement from the coach on what was his starting goaltender this season. Campbell has allowed 19 goals in his last four starts and has a combined save percentage of .836 in that span.
The Leafs got off to a bit of a slow start from a possession standpoint, and Campbell did appear to be in a groove to start the game.
And unlike in the game against the Sabres, the Leafs provided plenty of offence.
Toronto erased an early 1-0 deficit in the first period when John Tavares scored for the first time in 15 games. His power-play tally also snapped a season-high seven-game power-play drought.
In the second period, Toronto rallied with three consecutive goals to erase a 3-1 Vancouver lead and took a 4-3 advantage into the second period.
Nick Robertson, who was promoted to the second line, scored his first NHL regular-season goal after he buried a pass from William Nylander on a 2-on-1 chance.
“It was great. I mean, definitely relieved I feel like I haven’t scored so long in this league,” said Robertson who had struggled with injuries the last few years.”
Auston Matthews followed that up with his 38th and 39th goal of the season and the offence was flowing.
But the Canucks stormed back with three goals of their own (including an empty-netter) to defeat Toronto in regulation.
To his credit, Campbell didn’t seem distraught like has been following other difficult starts.
“I’m just working through it as hard as I can,’ Campbell said. “Sometimes trying too hard isn’t always the best thing and just letting the game come to me. I’ll get it back and I promise I will.”
But it’s not clear at this point how much rope Campbell will have to figure things out. Mrazek may very well get the net on Monday when the team visits the Columbus Blue Jackets, but his performance hasn’t been sharp enough to claim the No. 1 position.
Maple Leafs GM Kyle Dubas gave his vote of confidence in both goaltender when he spoke at Tim Horton’s Field on Friday, but Campbell’s performance didn’t do much to quell fears from a fanbase that may want a solution to their goaltending situation ahead of the Mar. 21 NHL trade deadline.
So what can be done that hasn’t been done to get Campbell back on track?
“It’s really hard. I mean, it’s not anything we can do for him at this point, other than play better in front of him,” Keefe said. “He’s going to go through or process to get ready. We fully expect that he will get there. Our focus has to remain helping both he and Petr out as best we can.”
News