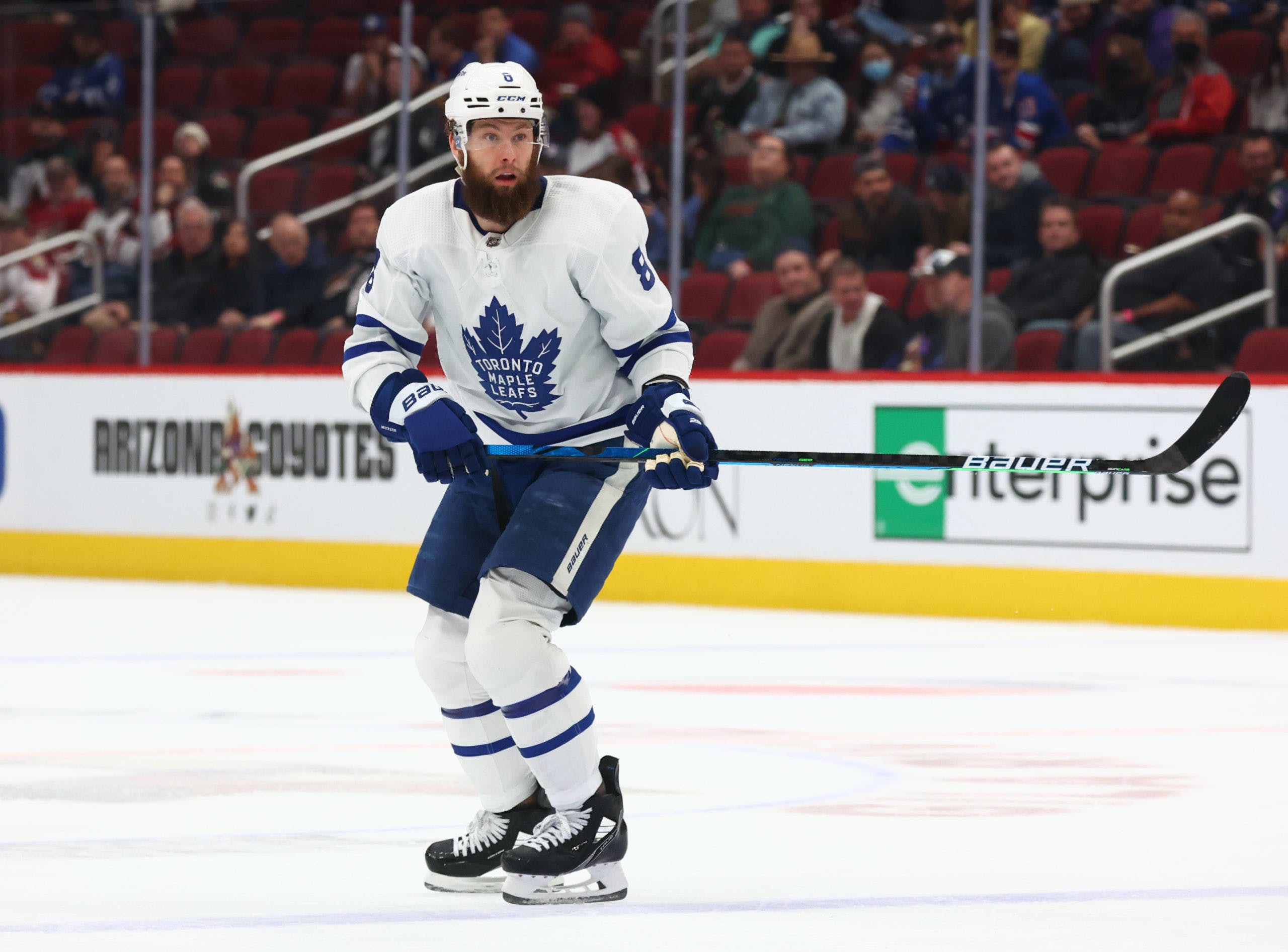 Photo credit:Mark J. Rebilas-USA TODAY Sports
9 months ago
Jake Muzzin has had a lot of time to reflect on his life following the two concussions he’s had in 2022.
“You’re always thinking about your health and what’s really important,” Muzzin said. “But I feel good.”
Speaking to the media for the first time since enduring his second concussion of the season on Feb. 21 against the Montreal Canadiens, Muzzin said it wasn’t too difficult to wait this second concussion out, given how quickly it occurred after the first one.
“Obviously I want to be out there, I want to be out with the guys playing but there’s a lot more important things in life than just this great game,” Muzzin said. “But I still want to be a part of it, I still want to play and I’m working towards that.”
The Maple Leafs were understandably cautious when Muzzin was involved in a collision with Montreal defenceman Chris Wideman. But just four days after the incident, Muzzin showed signs of improvement and was in the right frame of mind to watch the tail end of the team’s practice.
The Leafs placed Muzzin on the long-term injured reserve and there was speculation on whether the Leafs would use Muzzin’s $5.625 million salary-cap space to acquire other players at the NHL trade deadline.
Toronto elected not to go that route, as the veteran would be cold going into the postseason.
“It’s not going to be one of those things where we’re going to try to wait to have him come back in the playoffs,” Leafs GM Kyle Dubas said on Mar. 4. “The style of a player like him, if he’s healthy and he’s good to go, we need to get him back into playing and get him in form before the playoffs.”
Now it looks like Muzzin’s time has come as he will accompany the club for the four-game road trip that begins on Saturday against the Philadelphia Flyers and wraps up on Thursday against the Dallas Stars.
The 33-year-old ditched the red non-contact sweater he had worn at practice for a regular black kit on Friday. It was the strongest indication yet that the defenceman is nearing a return, one day after Maple Leafs coach Sheldon Keefe said the defenceman was “really close”.
Keefe ruled out a return against the Flyers, but if Muzzin gets through the team’s next scheduled practice on Sunday in Tampa Bay, then he could be ready to come back at some point on the trip.
And it appears management is preparing for the scenario.
On Friday, the Toronto Maple Leafs placed goaltender Petr Mrazek on long-term injured reserve (LTIR). The move was anticipated after it was announced that the 30-year-old Czech would be out of the lineup for a minimum of six weeks with his third groin injury of the season.
The additional $3.8 million in LTIR exception space created by the injury allows for the Maple Leafs to activate Muzzin without much interruption to their roster.
A lot has happened on the back end since Muzzin last played a game. The Maple Leafs acquired Mark Giordano from the Seattle Kraken and Ilya Lyubushkin from the Arizona Coyotes.
Muzzin is a fan of both pickups, especially Lyubushkin.
“I love the Boosh.” Muzzin said twice with a smile.
Lyubushkin will return to the lineup on Saturday after missing one game with a neck injury. He’ll skate alongside Morgan Rielly as the pair played together until the Russian missed Thursday’s 7-3 win against the Winnipeg Jets.
But as Muzzin returns, they’ll want to try and mix and match the defence pairs before finding an optimal lineup for the postseason.
“Muzzin’s return is going to force us to change some things just like Lyubushkin being out last night forced us to change some things,” Keefe said.  “Some of that will happen naturally, but we do want to get some look at some different combinations.”
News