Jake Muzzin’s injury is tough news, but the quality of the Leafs defence will allow them to survive easily 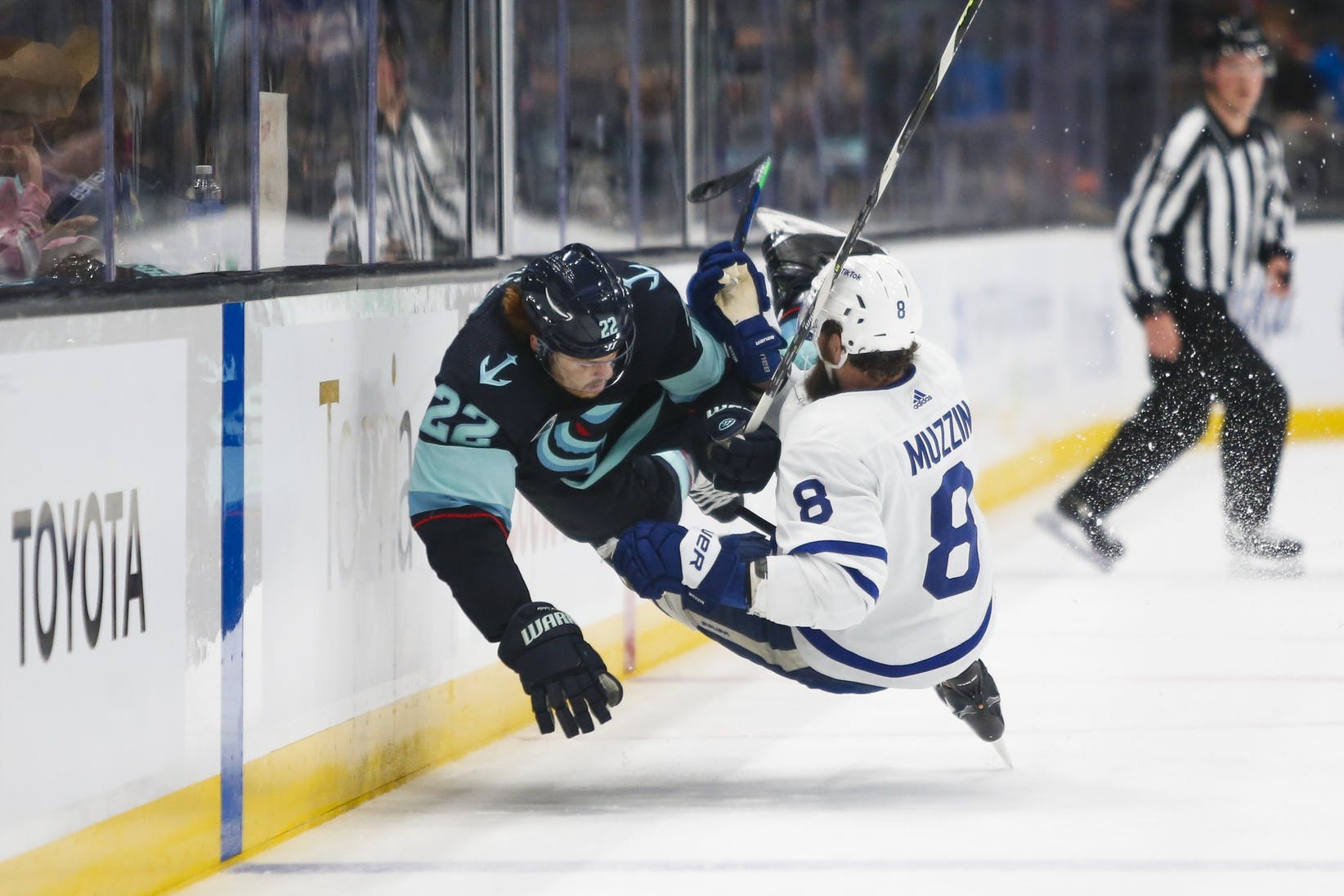 By Ryan Hobart
3 months ago
One of the toughest warriors the Leafs have brought into the organization in this era is Jake Muzzin. His career thus far has involved a constant display of both toughness and quality, something that the team sorely lacked before he came aboard. In the 4 seasons he’s played here since the midpoint of the 2018-19 season, no one has more hits, and only Morgan Rielly has blocked more shots, according to NHL.com. That tough play style catches up to everyone eventually. Compounding that is some really terrible luck with head and neck injuries. He was out twice last year with separate extended absences due to concussions. Now he is out with what the team is calling a neck injury, but I wouldn’t be surprised if his condition also includes concussion symptoms, based on the nature of the hit and his history. All in all it’s a really tough situation for him, his family, and the team.
The Leafs originally put Muzzin on the regular Injured Reserve (IR), which doesn’t provide any salary cap relief, just opens a roster space for a replacement player. Since, the Leafs have chosen to put him on the Long Term Injured Reserve (LTIR), which does give the Leafs room to work with under the salary cap.
There’s a few different scenarios for Muzzin now that he’s on LTIR. He could be out for a month, a few months, the remainder of the season, or, in the absolute worst case, permanently. In this piece I’ll assume that the Maple Leafs and their medical staff already know how long he’ll be out, with some degree of confidence, and will plan according to that. We, in the public, don’t know those specifics, and so we have to look at the different possibilities like this.

At the start of the season, if no one was hurt, the Leafs would have been over the salary cap. The Timothy Liljegren move to LTIR saved just enough to be cap compliant with a minimum complement roster, and Murray being on LTIR gave them back flexibility to bring that up to a full roster. But Liljegren (and Benn) will be back in about a week, and Murray’s original timeline had him being back in two or three more weeks. If Muzzin comes back as well, unless more injuries occur, they’ll be over the cap limit again. At that point, some salary will have to be shed and replaced by a lower salary player. Some options include Alex Kerfoot, Justin Holl, or Pierre Engvall.
In the meantime, the Leafs do have the depth to survive a short term absence fairly easily. Something like 4 to 6 weeks would be fairly manageable. With Liljegren back soon, they’ll have 6 capable NHL defenders, three on the left and three on the right, plus Victor Mete and Jordie Benn ready as extras for minor injuries that are bound to happen. It’s not even 100% clear whether Muzzin is better than any of those other 6 defenders at this point in his career. As such, I’d expect that nothing changes in this scenario. A boring conclusion to be sure, but I don’t see any other reasonable way the Leafs address a gap if he’s gone for this short a period of time.

This is probably the worst case for Toronto as a team in terms of salary cap management. Obviously, given the alternatives, it’s not the worst case for Muzzin the human being. Given the severity of his injury history, if he’s able to get to 100% and continue this season, that’d be great for him. But that kind of return timeline also makes life a bit difficult on Kyle Dubas and the management team.
If Muzzin is out 3-4 months, returning before the end of the season, the Leafs will still be stuck shedding salary to be under the cap, as above. They can either get a jump on this by starting to shop some of the salary relief candidates already mentioned, or they can wait until Muzzin is ready to return and make moves then. Even if the medical team is pretty sure Muzzin will be back this season, it’s very unlikely that they jump the gun.
While they have some good defensive depth, losing someone you expected to play most games for the medium term will test that. Undoubtedly, more injuries will occur in the next few months, and if Muzzin is still out, it’s going to be tough to ice a competitive back end of the squad. If one of Rielly or Brodie has to suffer even a few games out, the defence will face a significant challenge. Or so it would seem.
I’m here to tell you it isn’t a bad situation at all. The stats site Evolving Hockey posts a metric called “Goals Above Replacement” (GAR), which is a single number that encompasses everything we know about player stats in hockey and how those can lead to game outcomes. According to Evolving Hockey’s GAR model, the Leafs’ defenders rank as follows when combining the last two seasons’ results:
Even with Muzzin out, the Leafs will still have 7 defenders in the top 100 defenders of the last two years, according to this metric. That’s incredible, considering somewhere around 200 defenders are playing regular minutes each year. That puts the Leafs’ entire defense entirely in the top half of the league, even with two main pieces missing. Just, wow.
Note: Victor Mete is hanging just above 0 in GAR, meaning he is pretty well the definition of a replacement-level player.

Any sane and compassionate human being is hoping this is not the case, but a season-long absence for Muzzin feels possible. There is exactly zero part of me that is hoping that Jake Muzzin has to be out for a long period of time. He’s a passionate player and brings something significant to this team’s identity. Overall though, this is probably the best case for everyone. Muzzin returns to hockey for a playoff push, and the team isn’t forced to make any salary shedding moves. In fact, there’s some room to make additions.
With LTIR relief, the Leafs will have basically Muzzin’s entire $5.625M cap hit in space to work with.  That kind of money can buy you a lot of forward depth, which is where I feel they need the most help, while not losing a forward to make the roster work.
I won’t dive into the forwards they could add, as there’s a lot of season to play out before it’s clear who might make quality depth forwards available for a trade, but suffice to say that such a move becomes possible if Muzzin is out for the remainder of the regular season.

I’m sincerely getting a pain in my gut even writing that statement, but it’s not out of the realm of possibilities. Head injuries can go any number of directions. Marner’s somewhat pensive statements when Muzzin went to IR give me the sense that Muzzin’s health might be seriously at risk of preventing from playing professional hockey again:
The horrible outcome aside, Muzzin being relatively healthy but still never coming back to playing wouldn’t be unprecedented. The NHL has a well documented recent history of guiding oft-injured players who are in a career downturn to stay on LTIR for the remainder of their contracts, even if they may have the physical ability to still play hockey at a high level. For the Leafs, we’ve had Joffrey Lupul and Stephane Robidas go this route, and others like Chris Pronger and Marian Hossa have also been “LTIRetired.” Leafs fans may still recall this being referred to as “Robidas Island.”
In either case, my heart breaks for Jake Muzzin and his family. His time here will be rightly eulogized as a significant part of the team’s results. I dread that occurring, and hope that Muzzin gets to return to being the tough but effective defender he’s been since he joined the Maple Leafs.
More from Ryan Hobart:
Goal scoring threat Taylor Accursi hits the PHF open market, and the Toronto Six are a great fit
PHF Season 9 kicks off November 5th: full Toronto Six season schedule and how to watch
That’s all I’ve got, because I have been raising my first baby over the last 3 months 😀 but I’m excited to be back!
Editorials
Recent articles from Ryan Hobart