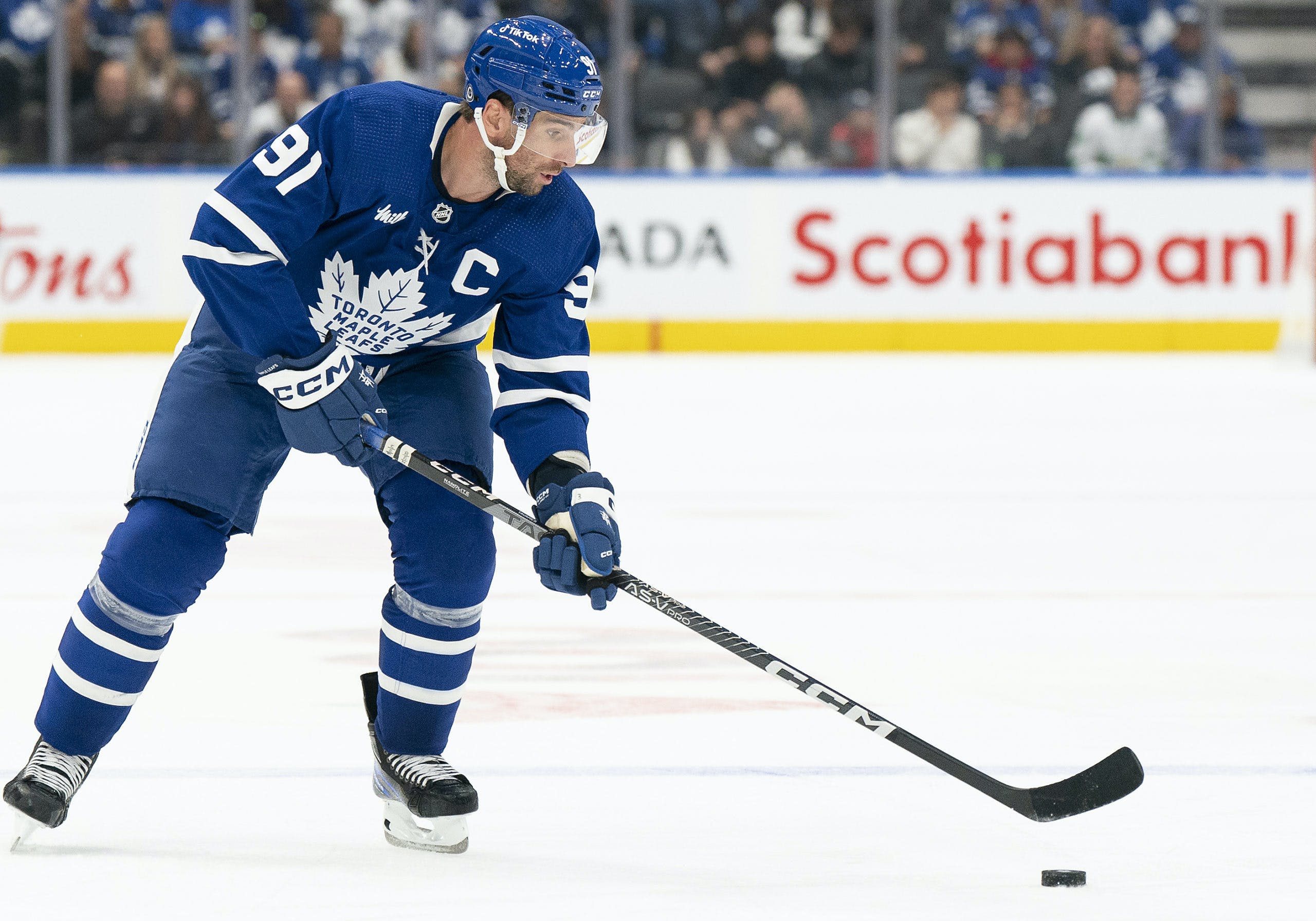 By Nick Barden
3 months ago
With every new day comes a different looking Maple Leafs lineup, but this time, it might be the one we see in Wednesday night’s season opener.
One of the biggest question marks heading into this week was whether or not John Tavares would be able to play in Toronto’s first game of the season. An oblique strain has kept him out of the Maple Leafs’ lineup since September 24th.
But there could be some good news on that front as the 32-year-old stepped onto the ice at Ford Performance Centre in a regular jersey.
This is the first time Tavares participated in a full practice with the team since being injured a few weeks ago. And with things progressing the way they are, it could mean the Maple Leafs’ captain could be ready for opening night.
Even Maple Leafs head coach Sheldon Keefe says the chances of Tavares playing on Wednesday night are good.
Having Tavares back in the lineup makes the Maple Leafs’ lineup decisions very interesting, not like they already weren’t. It seems as though that with Toronto’s captain returning to the lineup, Nick Robertson is back on the outside looking in.
But Denis Malgin, who had an incredible camp with Toronto, looks to have made the team.
Aside from the Maple Leafs’ second line, which has William Nylander at left wing and Malgin on the right, everything remains status quo.
This lineup makes the most sense for opening night, especially with Robertson out of the mix. It’s obviously a tough call, but having the 21-year-old on the outside allows for Malgin to stay in, avoiding waivers.
Robertson has the ability to go down to the Toronto Marlies since he is waivers exempt, but Malgin does not. It only makes sense to have Robertson go down for now, and maybe come back up once there’s an opportunity to get into the Maple Leafs’ lineup.
But it won’t be on Wednesday if Tavares can’t play.
The reasoning behind this is because the Maple Leafs will be $4 under the cap with both Jordie Benn and Timothy Liljegren on LTIR to begin the season, Carl Dahlstrom on SOIR (Season Opening Injured Reserve), and Robertson, Wayne Simmonds, and Kyle Clifford in the minors.
It’s not the worst situation in the world for Toronto to have Robertson not in the lineup, but it’s also not the best as he did have a great camp and was worthy of a lineup spot.
There was another question that needed to be answered prior to Wednesday night’s season opener, though, and that was who’s going to be the starting goaltender for Toronto.
And well, that question has been answered.
Matt Murray will be the starting netminder in Montreal on Wednesday and Ilya Samsonov will get the start in the Maple Leafs’ home opener on Thursday. And yes, it will be against his former team, the Washington Capitals.
Though it seems like all of the news has just dropped regarding Toronto’s lineup decisions, it’s safe to say the next few days of hockey will be very interesting. The regular season is officially back on Wednesday.
News
Recent articles from Nick Barden