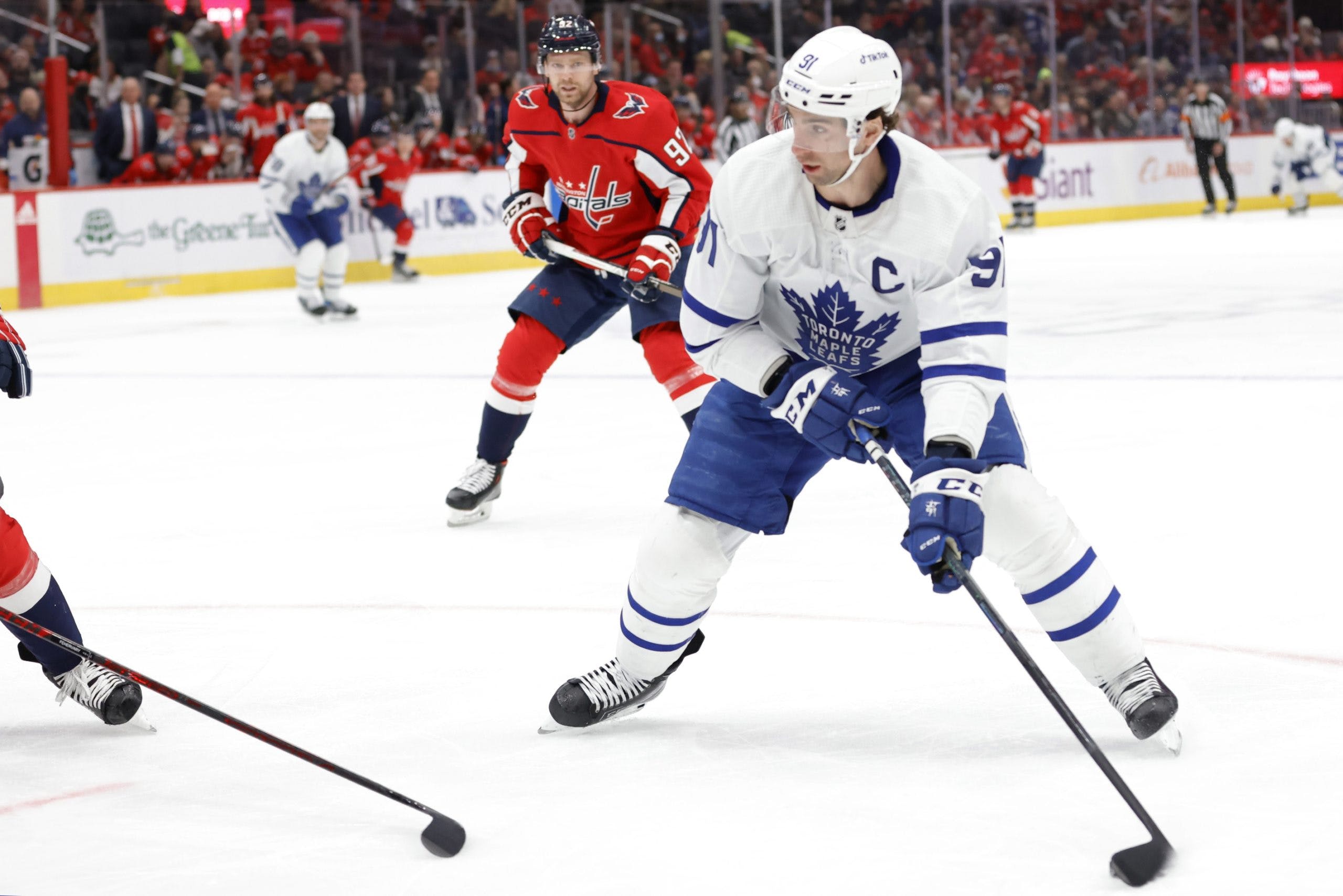 Photo credit:Geoff Burke-USA TODAY Sports
11 months ago
WASHINGTON – At one point, all John Tavares could do is look to the high heavens.
The Toronto Maple Leafs captain was all over the ice when a third-period scoring chance ended in a huge save from Washington Capitals goaltender Vitek Vanecek.
He didn’t score on Monday and extended his career-worst goal drought to 13 games, but picked up a pair of assists, including one on the game-winner as the Maple Leafs defeated the Capitals 5-3 at Capital One Arena.
“I thought he was really good today,” Maple Leafs coach Sheldon Keefe said of Tavares after the game. “He looks to me like a guy ready to break out here so it’s really good.”
Tavares missed the team’s last practise on Friday with an illness that had spread throughout the team. The captain admitted earlier before the game that he was still fighting it off.
And when he wasn’t battling that, he had Capitals tough guy Tom Wilson all over him in a very physical contest between the two clubs.
There was also the last-minute adjustment of linemates.
Ondrej Kase, who was expected to skate with the line, missed the game with an undisclosed ailment. He’s day-to-day, according to Keefe.
That reunited Tavares and William Nylander with Alex Kerfoot, and the trio connected on the team’s second goal of the game late in the first period to reclaim a lead they wouldn’t relinquish.
Michael Bunting was able to assist in matching some of Washington’s physicality, although he did take a pair of minor penalties for his efforts. He kickstarted Toronto’s offence with an early goal, thanks to an excellent retrieval by Mitch Marner in Washington’s zone.
The goal gave Bunting 41 points in 53 games this season. The point total matches Zach Hyman’s career-high, the guy who previously occupied a regular spot alongside Auston Matthews and Mitch Marner. Although it should be noted Hyman was on pace for more points as the last two seasons were truncated due to the COVID-19 pandemic.
“Right now it’s going in for me,” Bunting said. “I can’t get too high on the highs and get can’t get too low on the lows. I just try to stay even keel and just try to keep this thing rolling.”
Justin Holl scored with two seconds remaining in the first period and gave the Leafs a 3-1 lead after one period and that tally chased Capitals starter Ilya Samsonov out of the game.
With Vanecek in the game, the offence slowed a bit as the Capitals scored the lone goal of the second period, Wilson’s first of a two-goal night
In the third period, Washington tied the game with a shorthanded goal by Wilson. That put an exclamation mark on Toronto’s recent struggles on the power play that has now gone 0-14 in their last six games.
The Leafs made an adjustment before the game by moving Matthews to the bumper position on the top power play, but they veered away from it after it didn’t work.
Keefe suggested that teams are putting in more time by scouting what they do in that department more and are evidently making the right adjustments.
“I think teams have done that and it’s on us to counter that now,” Keefe said.  We didn’t do a good job of executing here today.”
Late in the third period is when Tavares’ shift down low resulted in Rasmus Sandin’s game-winner.
Pierre Engvall, who was a late sub for Kase, scored the empty-netter to secure the win.
Petr Mrazek picked up the win in goal and appeared more comfortable as the game went along. Initially, he was all around the net and Washington’s John Carlsson nearly tied the game early when his point shot bounced off of him and was about to cross the goal line. That’s when Matthews reached back in time to get his stick on it and just get it out of harm’s way.
“Sometimes you need bounces like that to win a game,” Mrazek said of that play. “That one was on our side today. Great defensive play by Matty.”
In the third period, Mrazek made some key saves that stood out. One was on a 2-on-1 where he made the splits to get his toe on a shot from Alex Ovechkin. He also made a big stop when he bailed out Timothy Liljegren who lost control behind the net went he went to retrieve a puck behind the net, resulting in a chance in front of the net for Washington.
Mrazek hasn’t had back-to-back starts this season, but with Jack Campbell’s recent struggles, the Czech goaltender may have earned another look with his 30-save performance.
In the end, the big key is Tavares. Despite not scoring, he had one of his better games during his recent funk.
More from THELEAFSNATION
News