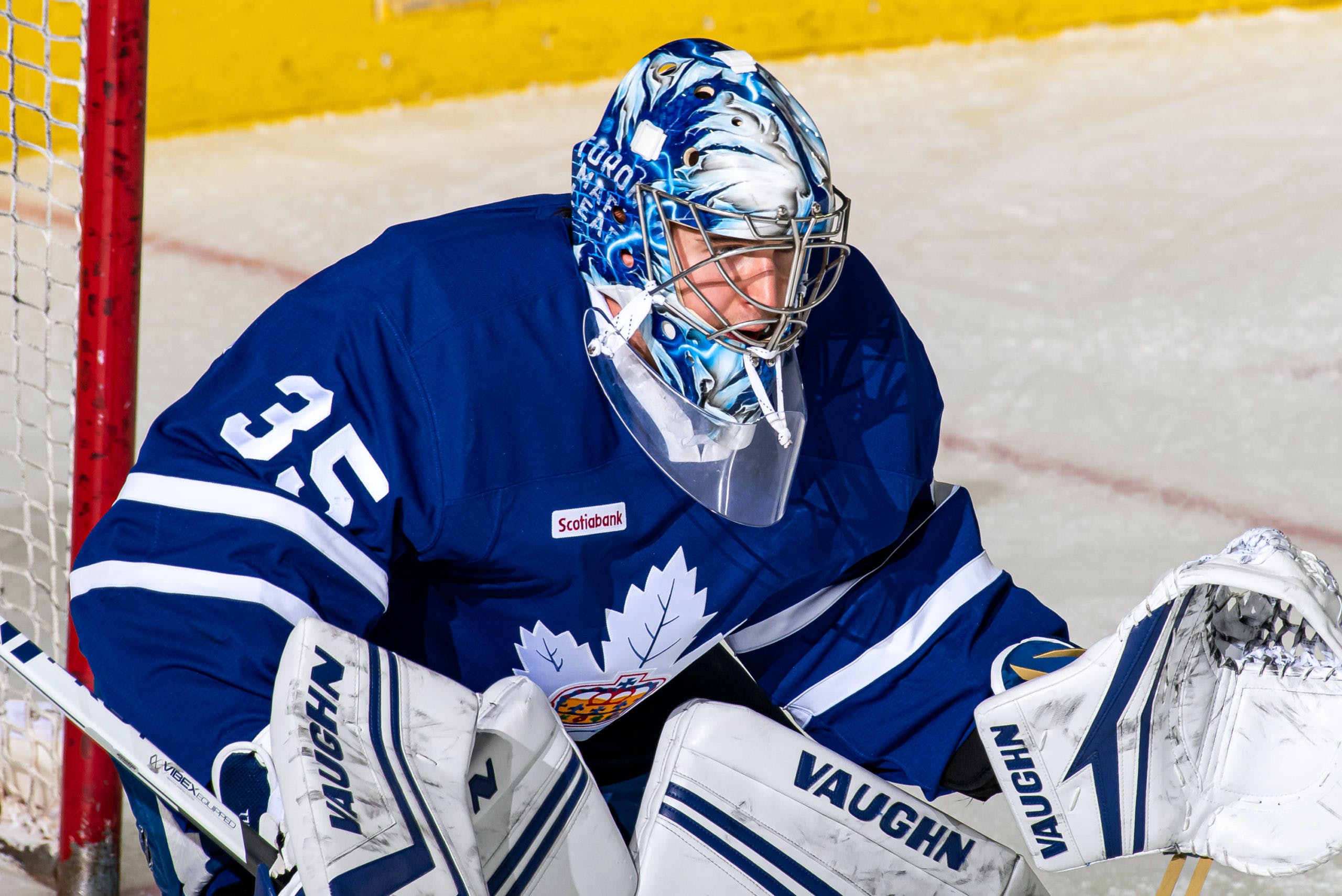 By Nick Barden
2 months ago
“It’s been a long time coming.”
Nearly eight months to the day, Joseph Woll makes his long-awaited return to the Toronto Marlies.
The 24-year-old suffered a shoulder injury back in March — setting him on a long road back to full health — which involved with a few “minor” setbacks.
“A lot of ups and downs,” the 24-year-old described of the rehab process, “a lot of times when I thought I was gonna be back and a couple little minor setbacks and now I feel really good and I’m happy.”
Woll suffered a mishap with his shoulder during rehabilitation and later injured his ankle, which pushed his timeline to return even further.
Crushing blow after crushing blow.
The 24-year-old admitted that it was a mental grind throughout the entire process. There were days which were good — and others, such as during his setbacks — that weren’t.
But what was it like for Woll, personally, when he ran into a complication?
“Truthfully, it depends on the setback.” He said. “I think some of them, I didn’t know exactly what was going on. So I think the way my brain works when I’m not sure what the right fix is, it’s really hard on me.
“I just always liked to make sure I know I’m doing what’s right and when I’m doing my part then I freeze my mind, so I think the hard things were when I didn’t know, you know exactly what to do when we were having trouble figuring out certain things, and it’s nice now. We got everything sorted out and I feel good. I feel healthy.”
The 24-year-old defined it as riding a rollercoaster. Except this up-and-down battle was brimmed with emotion.
“Some weeks you feel better than other weeks, and sometimes you don’t feel as good. The importance of keeping a narrow vision and your goal in mind, and understanding that life moves like this (a rollercoaster) a little bit. That was probably the biggest thing I took from (the rehab process).”
Woll isn’t going to see game-action with the Marlies right away, though.
When Maple Leafs GM Kyle Dubas confirmed on Monday that the 24-year-old would return to the team, he also said it could be “two to three weeks” before Woll is officially cleared to play.
But none of that matters to the 24-year-old. He’s just happy to be back on the ice with his teammates.
“It was a lot of fun today (Tuesday).” Woll said. “It’s just nice to be with the guys and have a fun practice, play a lot of three-on-three today. Just to be able to compete and be on the ice with my friends, it’s really fun.”
In the leadup to joining the Marlies for a full practice, Woll would take shots alone, with a coach. So, coming into a full practice is quite the change of scenery for the 24-year-old.
“Yeah, (it’s) a lot more fun, too.” Woll said with a huge grin.
“To be able to just, you know, come out and play and not have to think too much. I’ve been fortunate to have a lot of time to work on a lot of details but at the end of the day, it’s always a lot of just trusting yourself and playing, so it was fun to be able to come out and do that.”
Giving Woll these few weeks of practice will allow him to get back up to speed. Sort of like an unofficial training camp. In November.
But when it comes to returning to the Marlies’ crease — abruptly or with some time — the 24-year-old has experience. And he’s happy to keep that with him throughout this process.
“I’m just happy being where I’m at right now and getting to get some reps in practice and get back up to speed there. I think unfortunately, and fortunately, I haven’t really had a training camp yet from being injured and stuff like that. So, you know truthfully, the last couple years I’ve had experience of not really getting that time to get acclimated and just kind of getting thrown into the fire.
“I have that experience with me, so hopefully that’ll serve me well.”
News
Recent articles from Nick Barden