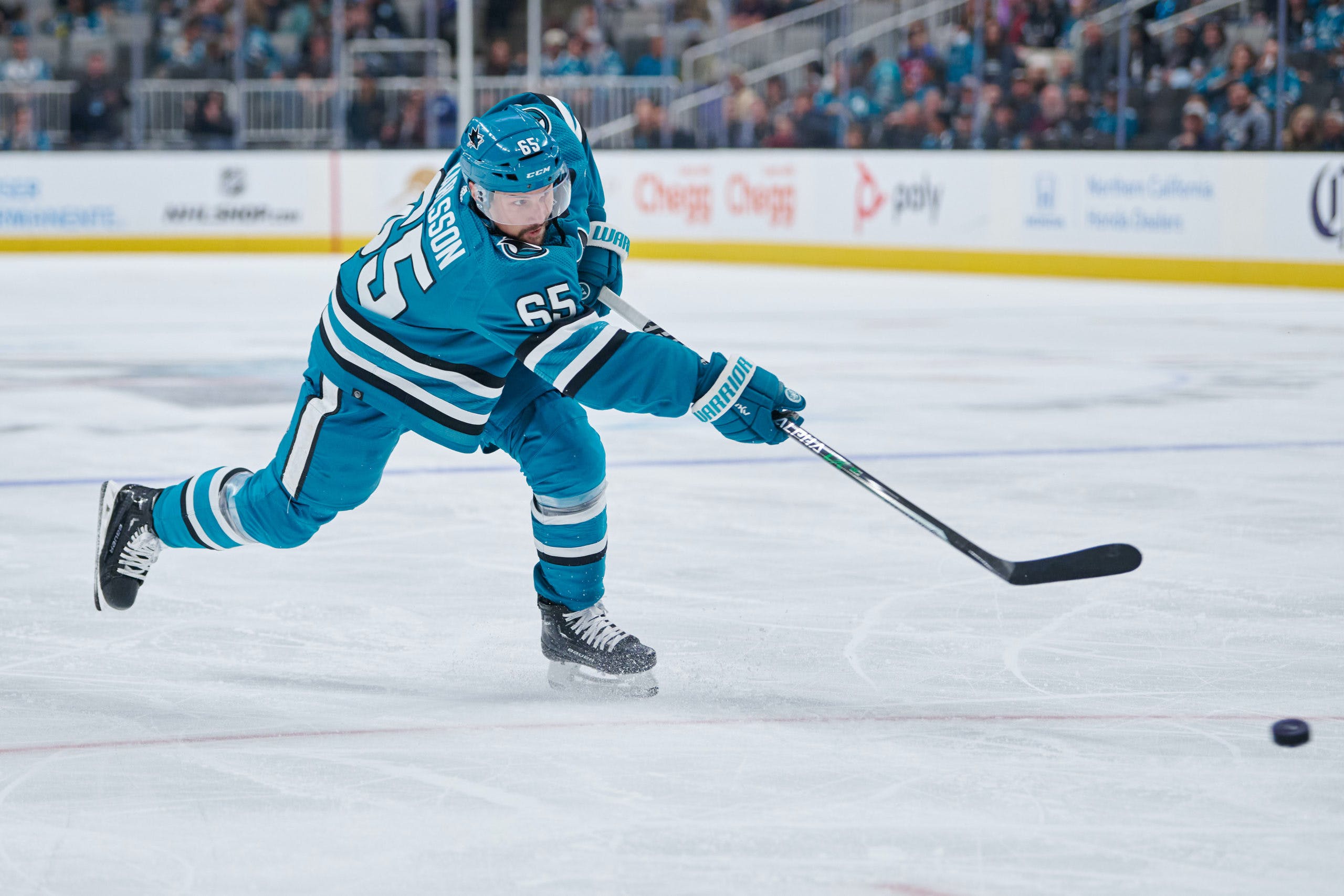 By Scott Ony
19 days ago
We’re nearly a month into the NHL season and it’s safe to say there has been more than a few surprises. At the top of the list is Erik Karlsson. At 32 years old he’s off to the best start to his career and single handily making the Sharks worth watching.
The New Jersey Devils have impressed as well with a 7-3 start but it’s the play from Jesper Bratt that stands out the most. He’s top five in scoring and has the longest current point streak in the league.
It’s looking like we could have a goalie battle for the Calder Trophy. A lot of people saw Logan Thompson coming but nobody was talking about Stuart Skinner before the season. Both are off to incredible starts and have their names in the Calder and Vezina Trophy conversations.
Karlsson resurgence
Held pointless in the Sharks first two games during the NHL Global Series, Karlsson looked old and destined to live out the rest of his 11.5M AAV contract in San Jose. Well, ten games and 15 points later he might be playing his way onto a contender.
He hasn’t been a terrible player over the last couple of seasons but at 11.5M his contract was completely untradeable. Now he’s earning every penny of it. With six goals and three assists over his last three games, he leads all NHL defenceman in goals (9) and points (15). His nine goals trail only Connor McDavid (11) for the league lead.
Scoring four points and his first career hat trick against the Anaheim Ducks last night, Karlsson trade watch should be front and center. It’s still going to be extremely difficult to move his massive contract but there are several teams who want to contend that could use him and he’s too good to be playing for a lottery team.
If San Jose is willing to retain salary or take on another bad contract like a Jamie Benn, we could see Karlsson back in the playoffs this summer. It’s not going to happen in San Jose though. Despite his hot start, they’re just 3-8-1 and have scored only 29 goals. He’s scored 31% of their goals so far and has points on 52% of them.
Bratt’s breakout season
Jesper Bratt led the Devils with 73 points in 76 games last season, yet he’s never talked about as one of the leagues best offensive players. When you think Devils, you think Hughes, Hischier and Hamilton, but it’s Bratt that makes their team go.
Ten games into the season he leads New Jersey in points with 16, six more than Hughes and Hischier. Those 16 points have him tied with Artemi Panarin for fourth in league scoring behind Connor McDavid, Leon Draisaitl and David Pastrnak. He also has points in every game this season.
With the talent in this league it’s hard to expect him to stay in the top five for scoring all year but he’s only 24 years old and coming off a near point per game season. The Devils are a lot of fun right now and he’s the main reason why. If he keeps this up, they could easily be a playoff team and he might even flirt with 100 points.
Rookie goalies
The NHL hasn’t seen a Calder Trophy winning goalie since Steve Mason in 2008-09. This could be the year that streak ends.
Logan Thompson is the clear front runner right now. In seven starts he’s 5-2 .938 SV%, 1.73 GAA and leads the league with two shutouts. His wins, SV% and GAA are all top three among NHL starters.
Obviously, his play has been outstanding, but it’s the opportunity he’s getting that makes him the favourite for the Calder Trophy. Adin Hill has played great for the Golden Knights as well, he’s not stealing any starts from Thompson though. The net in Vegas belongs to Logan Thompson and he could earn more than one trophy by the season’s end.
On the other hand, Stuart Skinner is sharing the net with Jack Campbell. Although, it doesn’t look like he should be. He’s appeared in four games (three starts) for Edmonton this year and leads the NHL with a .955 SV%. In seven games, Campbell has just a .881 SV%.
The Oilers spent 25 million dollars to bring Campbell in as their starter for the next five seasons but at some point, they have to consider giving Skinner the number one job. If Skinner can start getting the majority of starts, he will be in serious contention for the Calder Trophy. Until then, it’s Logan Thompson’s to lose.
News
Recent articles from Scott Ony

Editorials
Leafs squander another in OT, fall 3-2 to the New York Islanders: Muzzy’s Muzings
Do Not Sell My Info
Privacy Settings