Know Your Enemy: Can a depleted Maple Leafs lineup hold their own at 5v5 against the Avalanche? 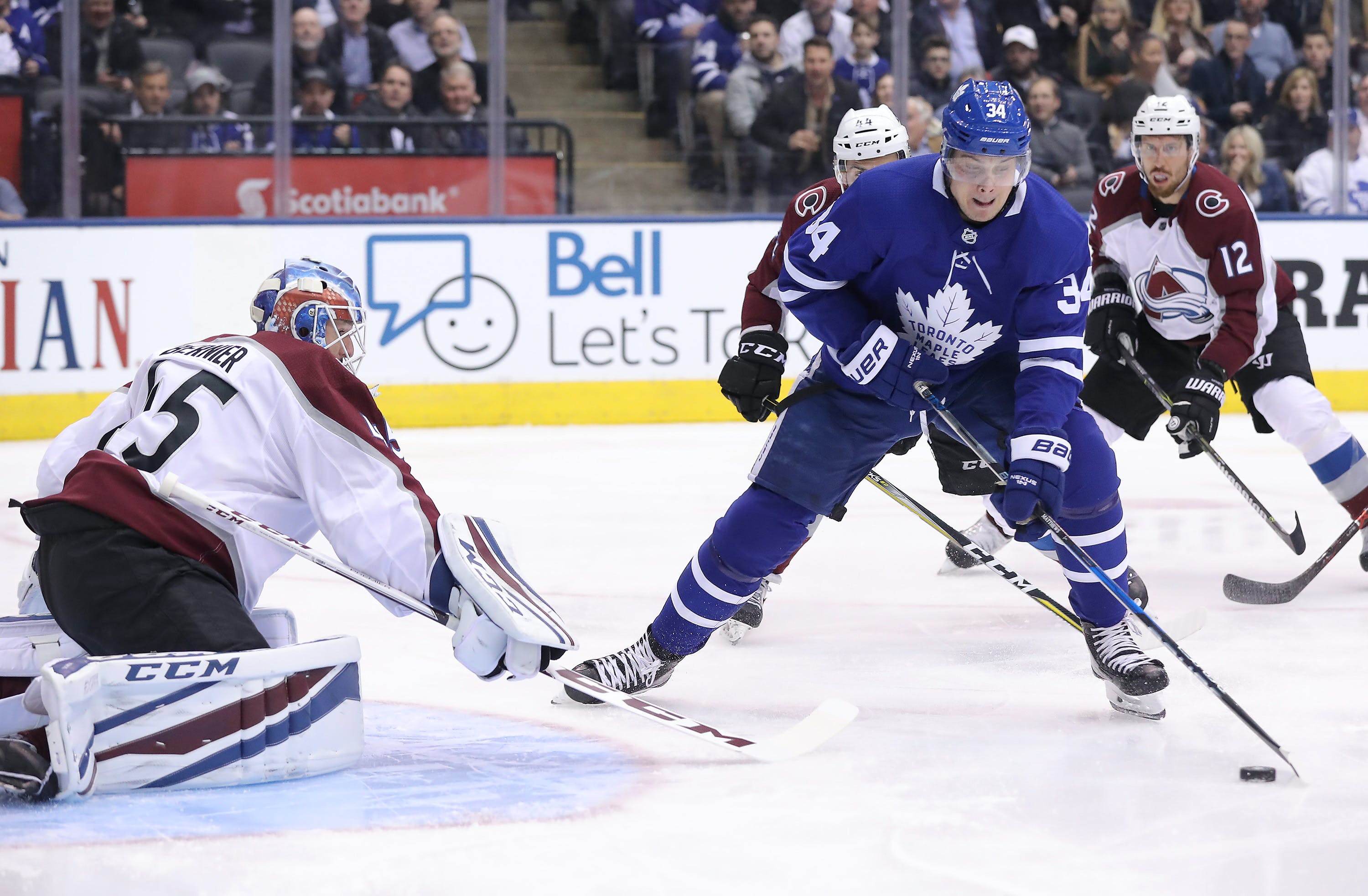 By Scott Maxwell
10 months ago
A Saturday night matchup between the Toronto Maple Leafs and Colorado Avalanche is the kind of game you mark on your calendars for, as two of the best teams featuring some of the leagues best forwards and defensemen go head to head. It’s the kind of game many would label a Cup Final preview, even though most Leafs fans don’t know what the second round is at this point in their lives. To make things even more exciting, both teams are coming in on hot streaks, with the Leafs rocking a four game winning streak (albeit split halfway through by a three week break) and the Avs winning eight of their last nine, including three in a row since coming back from their holiday/COVID break. But, with the Leafs down a few players, it certainly makes the task of winning tonight’s game a more difficult one for the Leafs, so how exactly can they match up against a loaded Avs team and exploit them?

There’s not a whole lot I can tell you about the Avalanche’s first line that you don’t already know. The trio of @Gabriel Landeskog, @Nathan MacKinnon, and @Mikko Rantanen have been one of the best lines in the league over the past few years, and there are very few units that can match up with them on a consistent basis. They have the protypical line setup, with your speedy creative playmaker in MacKinnon, goal scoring machine in Rantanen, and the more physical forechecker that steps it up defensively in Landeskog, with all three of them being able to burn you, and are well over a point per game so far this season. From a possession stand point, the line’s weakest link is actually MacKinnon, as he hasn’t quite been the play driver he usually is, and his defense has been pretty mediocre this season as well, but Landeskog and Rantanen make up for it as possession monsters and can shelter MacKinnon a bit so that he can be the skilled maniac that he is. Overall, the line has still had a lot of success this season, with a 59.54% CF% and 58.21% xGF% at even strength, and they’ll be a tough one to contain.
@Andre Burakovsky, @Nazem Kadri, and @Logan O’Connor haven’t played together this season, but on paper, it has the makings of a strong second line. Kadri is having a resurgence of a season with 42 points in 27 games this season. It’s already the most points he’s had in a single season with the Avs, and he’s only 20 away from setting a new career high. Burakovsky is an excellent compliment to Kadri’s breakout year, as he’s almost a point per game and can drive offense just as well. While both of them can drive play well, they aren’t great defensively, so that’s what O’Connor brings to the table. With 13 points in 30 games he won’t hurt you offensively, and his defensive game is much better than the other two. O’Connor has been pretty flexible all year and been moved around a lot, so he should be the perfect complementary piece to the one flaw of this second line.
The third line of @JT Compher, @Alex Newhook, and @Nicolas Aube-Kubel is another one of those line combos that we’ve seen in this series that haven’t played quite enough time together, creating some wonky results in their numbers, with just under 13 minutes of ice time and a 43.59% CF% and 58.82% xGF% at 5v5. Newhook is a highly touted first round pick from the 2019 draft in his first full season, and has shown a lot of promise so far with 11 points in 21 games and some strong defensive results, particularly a 55.68% xGF% at 5v5, good for fourth among Avs forwards. He’s in a bit tough tonight, as Compher has some of the worst possession results on the team and Aube-Kubel, while not bad, doesn’t move the needle much, but perhaps this ends up being a nice test of Newhook’s skills without having to put him in the top six when he isn’t ready. Regardless, this is probably the Avs most exploitable line in the top nine.
It’s bad enough for the Leafs that they’re up against a loaded Avs team, but to also be without @Mitch Marner and @Pierre Engvall, who have been a couple of key cogs to their lines this year, makes matchups even tougher tonight. The Leafs have three different line combinations in the top 20 in CF% this year, and four in the top 30 in xGF%, and only one of those does not include one of Engvall or Marner, so they’ll have to go back to the drawing board, experiment and see what sticks. Normally, I’d say go best on best with @Auston Matthews and MacKinnon, put @David Kämpf’s line up against Kadri’s, and then let @John Tavares’ line run amok against the wildcard third line for the Avs, but we don’t really know how the Matthews line will work with @Alex Kerfoot on there, how @Ilya Mikheyev will look in a top six role, and how Kämpf’s line will not only do without Engvall and @Ondřej Kaše, but with @Nick Ritchie and @Jason Spezza in more elevated roles. Hilariously, all three line combos have under a minute of playing time together, but have 100% CF% and xGF% together. Fun with small sample sizes! But yeah, I think the big thing to look out for at this point then is keeping Kämpf’s line away from the top six, considering his play without Engvall hasn’t always been great this season, otherwise it’s hard to really plan the matchups when we don’t quite know how the Leafs line combos work together.
Both team’s fourth lines are what a fourth line looks like when you’re team is dealing with a few injuries, as the Avs are opting for the seven defenseman approach with @Kurtis MacDermid (or they actually are planning on playing him at forward), while the Leafs are looking to @Brett Seney as their center, who will be playing just his fourth NHL game since the 2018-19 season and second of the season. The Leafs current fourth line actually does have four and a half minutes of playing time together, except they have registered an form of a shot, scoring chance, or even shot attempt for in their time together… so that should be fun. Regardless, there isn’t really much of a matchup here considering that the third forward on this line will range from MacKinnon to Compher.

The @Cale Makar and @Devon Toews top pair has been one of the leagues best since the Avs acquired Toews in the 2020 offseason, as he was developing into one of the best defensemen in the league with the New York Islanders before being paired with one of the best up and coming defensemen in the league in Makar. Makar brings a certain skill to the position that we haven’t seen in a long time, and both his confidence to pull it off at on a regular position, and the ability to do it without messing up most of the time has already made him one of the best defensemen in the league in just his third NHL season. If not for another young defenseman playing amazing in @Adam Fox, he’d already have a Norris trophy to his name, and the fact that all this skill doesn’t come at the expense of his defensive game speaks even more about his abilities. Oh, and he’s also second on the Avs in goals with 14 already, and is currently on pace to become just the fourth defenseman to score 40 goals in a season, and first since @Paul Coffey in 1985-86. Toews compliments him perfectly, and together they make for a frustrating defense pair to play against, mostly because you’ll be chasing the puck more often than not with them on the ice, with their 58.58% CF% and 52.4% xGF% at 5v5.
@Samuel Girard was another Avs defenseman who had a coming out party in the 2020-21 season as a high end defenseman, but he’s struggled a bit more this season defensively. Thankfully for him, @Bowen Byram has actually had a really strong season defensively and helps hide that a bit more. Now, the duo still has more mediocre numbers together, especially on the Avs, with a 52.83% CF% and 46.16% xGF%, so if the Leafs want to exploit anything tonight, it’s this pairing. That said, if the thing you’re looking to exploit is Girard, you’re playing with fire, because he could easily shift back into his own Norris-calibre form, and even with his fall off this season, he can still burn you offensively with 17 points in 28 games.
The nice thing with Girard’s struggles this year is that it makes a matchup against @Jake Muzzin and @Justin Holl much more swallowable, especially since that pair is starting to find their form again, with their xGF% finally above 50% at 50.51%, and their CF% not far behind at 49.56%. In past years I wouldn’t be too excited for a @Morgan Rielly matchup with Makar, considering that would end up as a track meet that Makar would be able to control a bit more, but Rielly’s play this year has been phenominal, so it’s a matchup that him and @TJ Brodie can handle.
One injury that’s a blessing in disguise for the Avs and even worse news for the Leafs is @Jack Johnson being out of the lineup, who you could argue is one of the most impactful players in the league, but only because he’s so bad that he can turn even the best players results into a garbage fire when he’s on the ice with them. That takes skill. Now, he hasn’t been as bad with the Avs this season, but that’s like saying spoiled milk doesn’t smell as bad as rotten compost bathed in sewer water, he’s still been really bad for the Avs. Instead, the Leafs get @Erik Johnson and @Ryan Murray, which is a much better bottom pair for the Avs. Murray really found his form as a defensive defenseman with the Columbus Blue Jackets, but hasn’t quite captured that since, while Erik Johnson is about as average as they come this year, but finding ways to excel in a bottom pair role. The result is a pair with a 52.93% CF% and a 59.27% xGF%. That said, the Leafs bottom pair of @Rasmus Sandin and @Travis Dermott is one of the best in the league and can match up with most bottom pairs, especially with their 57.74% CF% and 66.88% xGF%.
With no goalie confirmed for the Avalanche, I’m going to avoid the goalie matchup for right now and potentially update if we find out with some time to spare.

The Leafs are one of the best teams in the league, especially at controlling the play 5v5, but the Avalanche are one of the few teams that do that better. The Leafs do hold the special teams advantage, and the Avs haven’t gotten good goaltending, so if they’re going to exploit the Avs anywhere, it’s going to be hoping that Campbell can bail the team out, while playing disciplined and striking on the power play when they can. I say that as if the Leafs are going to struggle at 5v5 when the reality is that it’ll just be a much closer matchup than they’re used to at 5v5, especially with Marner and Engvall out, so with not too many options to exploit at even strength, special teams and goaltending are going to be what puts them over the top.
Uncategorized
Recent articles from Scott Maxwell