Know Your Enemy: How the Maple Leafs match up against a slumping Devils team in a back-to-back 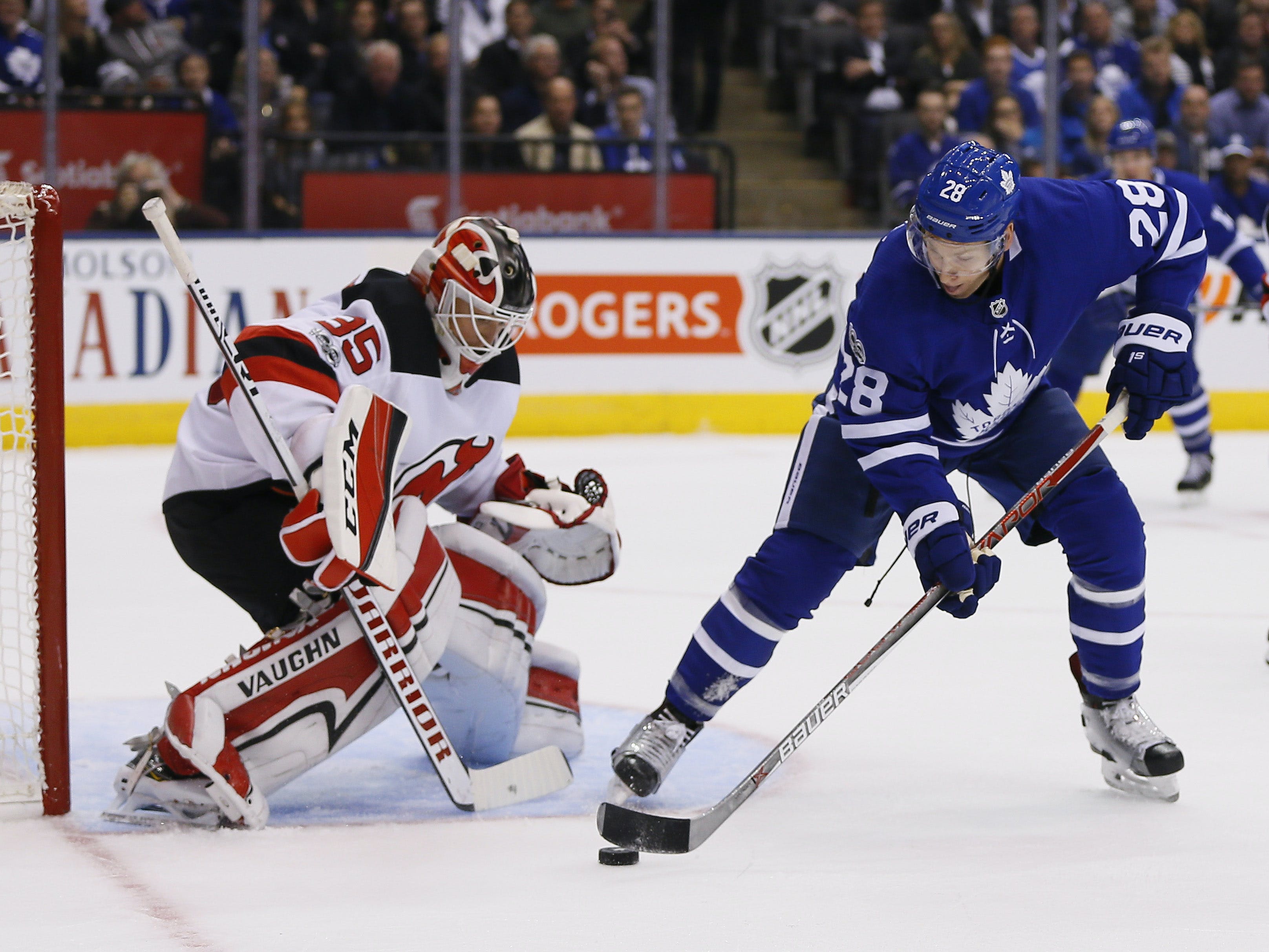 By Scott Maxwell
10 months ago
While being one of the best teams in the league usually means the matchups are going to be easier by default, the Toronto Maple Leafs find themselves in another matchup against a significantly inferior opponent in the New Jersey Devils. They had slightly higher expectations after a big offseason, bringing in @Dougie Hamilton, @Jonathan Bernier, and @Tomas Tatar, as well as the growth of two first overall picks in @Jack Hughes and @Nico Hischier but have struggled mightily due to injuries and, well, being the Devils. They come into tonight’s game having lost seven of their last eight, a slump that has kept them behind even the Philadelphia Flyers when they were losing 13 in a row. They’ve only made it to the playoffs once since their Cup Finals run in 2011-12 ten years ago, and it doesn’t look like that’ll be the case this season, but that doesn’t mean they don’t have something to prove either.
It should be noted that because the Leafs play the Devils in back to back nights, this will probably cover both tonight and tomorrow’s games, unless there’s a big change in the lineup for either team, or something injury related (ie. someone significant gets hurt tonight or someone significant returns tomorrow). So like, if the teams change their fourth line or third pair for tomorrow’s game, I’m not typing up 1500-2000 words again for that. There might be a brief update, but we’ll see what happens when we get there.
Note: This is based on projected lines and starters at the time of publishing. Coaches really love to surprise us right before game time, so there’s a solid chance that some of the matchups aren’t accurate for the actual game because of that.

The Devils top line has found a lot of success this season when they’ve been together, as they rank 47th in the league with a 60.9% CF%, and 58th with a 62.08%. Hughes is the big name on that line, as he’s finally putting up the offense that many thought he would when he was selected first overall with 25 points in 26 games. That said, a lot of that comes from getting a lot of ice time and the power play, but he can still drive offense regardless. He’s been struggling defensively as well, but that’s what @Jesper Bratt is there for, who’s having a spectacular season for the Devils. On top of the 39 points in 40 games he has, he’s also been a force at both ends of the ice against top competition, making life easier for Hughes. @Yegor Sharangovich is the final piece on that line, and while he also can’t defend too well, he can drive offense really well, and is a really strong finisher when he gets the ice time. All in all, it’s a very strong offensive line that has a player in Bratt capable of defending for the unit as well, and will make for a tough matchup.
The same can’t be said of their current second line, which haven’t had too much time together, but haven’t had much success in that time either. Hischier hasn’t quite found his offensive form in the NHL just yet, but he’s still an excellent play driving center for the Devils. He’s a little bit over his head defensively for the team based on how they play him, but he’s also probably the most qualified player for the role on this team. His linemates aren’t exactly helping him either, as @Pavel Zacha has started to find a bit more of that finishing talent that made him a sixth overall pick back in 2015, but he doesn’t bring much to the table otherwise, and @Nathan Bastian is a solid defensive forward, but more in a fourth line role than a top six one. It definitely has the potential to be exposed tonight, especially when the Devils are likely to play it as a shutdown role.
The third line has gotten it’s fair share of games together, and have been strong at driving possession with a 57.88% CF% at 5v5, but aren’t quite there with the scoring chances with a 44.1% xGF%. It features a familiar face in @Andreas Johnsson, who will be playing the Leafs for the first time since being traded as a salary dump. He got off to a hot start with 18 points in his first 20 games, but has just six in his last 21, but has definitely developed a nice offensive ability, with good finishing and a solid help on the power play as well, much like what we saw in his rookie season in Toronto. Tatar was one of those big free agent additions for the Devils, and his usual play driving abilities are there, but he hasn’t quite put up the numbers that the team hoped they’d be getting when they signed him. They’re centered by @Dawson Mercer, one of the Devils three 2020 first round picks, who’s having a solid rookie season with 22 points in 43 games, but is naturally having trouble defensively, as most rookies do. It’s a line that has that offensive fire power, but it’s not always there, and defensively isn’t quite there either aside from Tatar.
As far as the matchups go, I’d probably go line for line with the Devils if I was the Leafs. The top line is certainly the best line, but nothing that the Matthews line can’t handle, the second line is definitely the most flawed overall but used as a shutdown line so they might be best suited for the Tavares line, and I’m still uncertain about the Kämpf line without Engvall, so the third line makes for a good matchup because they might not burn that line a ton, but can still provide a bit of a challenge and need to be shutdown.
The Devils fourth line is about as average as a fourth line can be, not terrible but nothing to write home about either. It features another former Leaf in @Jimmy Vesey, who as we remember was nothing special for the Leafs and hasn’t really been for the Devils either, as well as @Jesper Boqvist and @Janne Kuokkanen, who can neither score, drive offense, defend, or gets special teams time. They’ll be up against the Leafs fourth line, which still has some of the best numbers in the league together with a 69.02% CF% and a 66.03% xGF%, so even a line that is just okay is likely to struggle against them.

The Devils have looked to @Damon Severson and @Jonas Siegenthaler as one of their top pairs all season, and it’s worked surprisingly well considering Siegenthaler’s resume prior to this season, with a 52.66% CF% and a 55.52% xGF%. But, Severson has been an elite defensive defenseman for the Devils for years now, the kind that probably won’t get any attention until he goes on a deep playoff run for a shutdown pairing, so it’s no surprise that he can make Siegenthaler as good as he’s been this season. I make Siegenthaler sound incompetent otherwise, but he’s actually a really strong defensive defenseman, he’s just finally getting that shot this season in a bigger role. It makes for a really solid shutdown pair on a team that really needs one.
With Hamilton still out of the lineup for a while, the Devils have had to rely on @P.K. Subban in a top four role. There was a time where his name would strike fear in the hearts of many, but since coming to New Jersey, Subban has fallen off a cliff, and is now the kind of defenseman you shelter when possible. @Ryan Graves helps ease that burden, a strong defensive defenseman that the Devils got from Colorado since they didn’t want to risk losing him for nothing in the expansion draft. That said, the two basically just meet down the middle, as they end up with a 50.78% CF% and a 48.68% xGF%, so if there’s a pairing you want to expose, it’s this one.
I’d definitely try and lean on the Rielly-Brodie pair and Matthews line against that Devils top pair, especially with Muzzin still out and Sandin and Holl still trying to figure things out as a top 4 pair. That said, the results so far have been very promising, and they’ve held down the fort very well without Muzzin.
Obviously, it’s just a third pairing, so it’s not intended to be amazing, but when @Colton White and @Ty Smith have been together, it has not been pretty, as the duo have the 22nd worst CF% in the league with 36.38% and the 16th worst xGF% with 30.91% at even strength when they’re together. Part of that comes from the fact that this is the first time White has played more than six games in a single season, but also Smith’s results aside from his assist totals haven’t really been pretty since joining the NHL last season. They’ll be up against Liljegren and Dermott, who haven’t quite found good results together either, but not nearly at the level that this Devils pair is, so maybe it’ll be a nice confidence boost for them.

Starting in net for the Devils tonight is @Akira Schmid, who I had honestly never heard of before finding out he was the starter. It hasn’t exactly been smooth sailing for him so far in the NHL, with an .824 save percentage, but the Devils aren’t exactly playing amazing in front of him either.
It looks like an easy matchup for @Jack Campbell if you look at how he’s done all season, but a closer look at his work lately, and it’s not as much of a one-sided affair as you think. If you only look at Jack Campbell’s numbers since December 11 (when Schmid made his NHL debut), it’s surprisingly close.
Campbell is still the better goalie of the two, but his numbers haven’t been Vezina calibre lately, and it could be a much closer goalie battle than we think based on the names involved.

The thing with a back-to-back is that while it increases the chances of the Leafs for sure getting at least one win, it’s not a large enough sample for shenanigans to correct itself either, so it wouldn’t shock me if the Devils get a win purely from chaos. That said, the Leafs are clearly the better team, and are also much healthier. Heck, they’re even the luckier team, so it wouldn’t even shock me if the Leafs are the ones that pull out a lucky win in this back-to-back.
If I had to make a prediction, I’d say the Leafs get both wins, but it wouldn’t shock me if the Devils win a weird one in a shootout or something. It’s hard to see the Devils winning both games though, unless the Leafs just really want to get to the All-Star break without putting in much of an effort and don’t show up like they did for the first two periods of the Red Wings game, so I expect the Leafs to come out of this with at least a couple points, but considering the team, it should be four.
Projected lineups via @dalter and Daily Faceoff
Standard stats via NHL.com
Line data and advanced stats via Evolving Hockey
Individual player information via JFresh’s Player Cards
Uncategorized
Recent articles from Scott Maxwell