Know Your Enemy: The Maple Leafs and Golden Knights match up well despite injuries 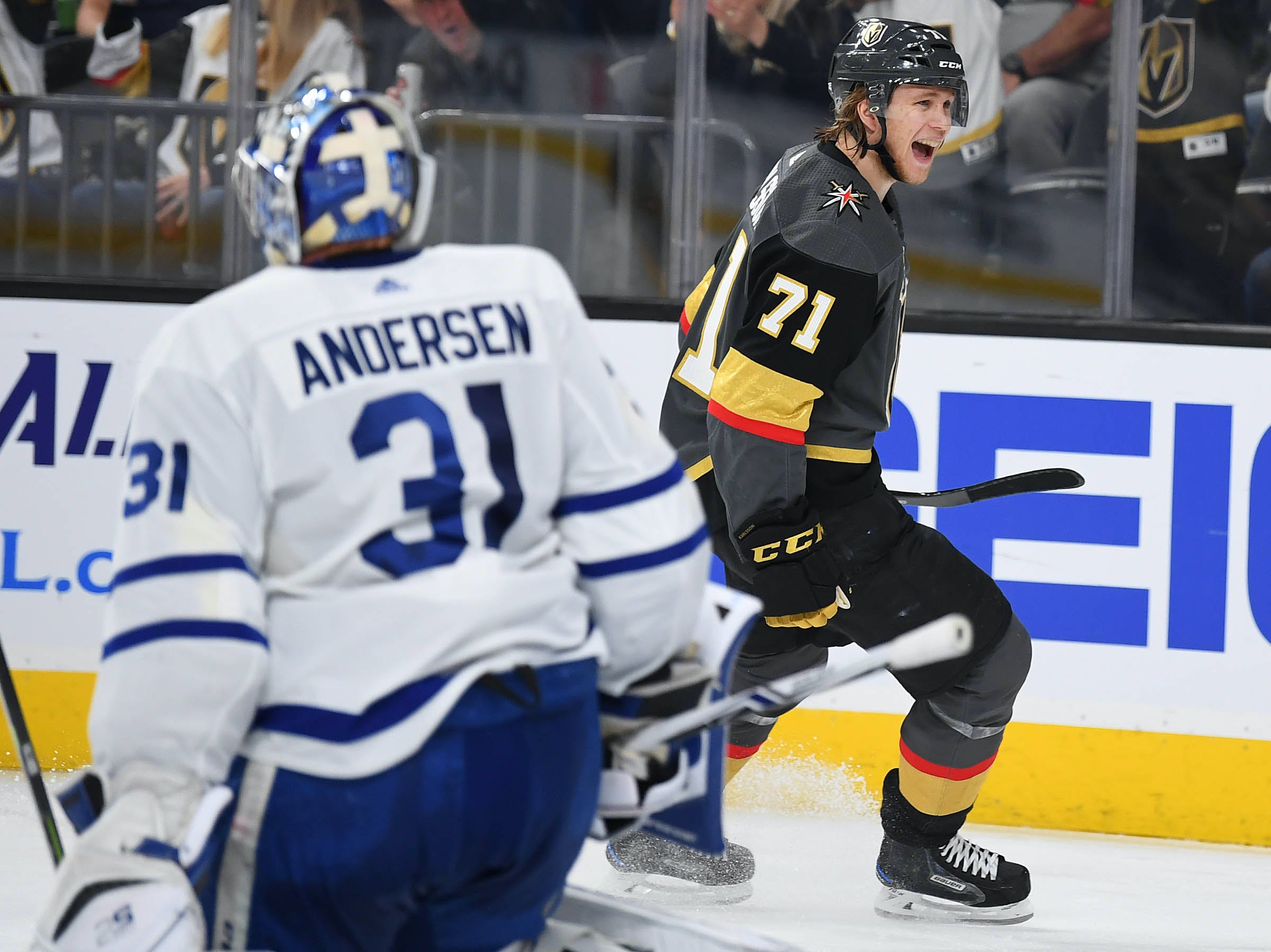 By Scott Maxwell
1 year ago
Despite the fact that the Toronto Maple Leafs just about got the result you could expect from a game against the Colorado Avalanche while dealing with injuries, the way they got to that result was a disappointing one. They’ll be looking to rebound against the other big contender in the Western Conference in the Vegas Golden Knights, who are also dealing with injuries from important players, with @Max Pacioretty and @Jack Eichel still on the shelf for a while (although Eichel looks closer to returning). Despite that, they’ve seen a rise in the standings from a slow start to the season, although they’re on a bit of a cold streak losing three of their last four. It’ll make for an interesting matchup regardless of both teams, and is a potential Stanley Cup Final preview with how strong both teams can be.
Note: This is based on projected lines and starters at the time of publishing. Coaches really love to surprise us right before game time, so there’s a solid chance that some of the matchups aren’t accurate for the actual game because of that.

@Alex Pietrangelo and @Brayden McNabb is supposed to be the shutdown pair, and while their individual play this season would have you think that it wouldn’t end well, they’ve actually worked out pretty well together. Pietrangelo is normally one of the best defenseman in the league, especially in his end, with the ability to eat a lot of tough minutes, but he’s struggled defensively this season even after adjusting for his usage, with a 2.74 xGA/60 that puts him among players like Tyson Barrie and Marc Staal. McNabb is also one of the better defensive defenseman in the league, but has been pretty unremarkable as well after adjusting for his usage. Together, it’s a pairing that really shouldn’t work on it’s own, never mind given the tough minutes, but so far it’s worked to the best that you can expect, with a 50.24% CF% and 51.81% xGF% at 5v5. It’s not amazing, but if you’re up against the league’s best and breaking even, that’s all you can ask for.
That frees up the second pair of @Shea Theodore and @Zach Whitecloud, which has been one of the better defense pairings in the league when they’ve been together, with a 56.89% CF% that’s 52nd in the league, and a 62.18% xGF% that’s 24th in the league, and much like a bunch of other combinations for the Golden Knights, it’s because of how well they compliment each other. Theodore is what the casual hockey fan though prime Erik Karlsson was, as he drives offense and scoring chances like crazy (although not as much this season), but struggles defensively. That works perfectly for Whitecloud, who has emerged as one of the better defensive defensemen in the league, or at least in the minutes he’s been given. He was mostly a third pair defenseman until he started playing with Theodore, but he’s one of the best in the league at suppressing scoring chances, with a 1.94 xGA/60 at 5v5 that ranks 20th in the league, so it works well with an offensive defenseman like Theodore.
I know I’ve only just started this series this month, but I think you can kind of clue into what my choices for the top four matchups will be. Give @Morgan Rielly and @TJ Brodie the tougher matchup against Theodore and Whitecloud, and give @Jake Muzzin and @Justin Holl the easier matchup in McNabb and Pietrangelo. Which also works out for the mainstream opinions on these pairings anyways, because they probably consider the Pietrangelo and Muzzin pairs the tougher of the two.
The third pairing of @Ben Hutton and @Dylan Coghlan are about as average as third pairings go, as neither of them really bring much to the table at even strength, but don’t hurt you either, and maybe also bring a few special teams benefits as well. The duo have a 56.32% CF% and 48.34% xGF% in their time together, so they can maintain possession well, but when they slip up, it’s usually a good scoring chance. That said, @Rasmus Sandin and @Travis Dermott aren’t a typical bottom pair, so it should be an easy matchup for them.
With no confirmation for Vegas’ starter, there won’t be a goalie matchup. That said, the Leafs have had the better goaltending by a wide margin, and @Jack Campbell has been better than both @Robin Lehner and @Laurent Brossoit this season, so this matchup heavily favours the Leafs.

Usually it’s the other way around when these teams face, but the Leafs have the advantage defensively and with goaltending, while the Golden Knights have the advantage offensively. That said, both of those are also weighted by luck a bit, so if you account for the inevitable regression, both teams seem to meet right down the middle. The Leafs best advantage in this game is taking advantage of Stone and Pietrangelo’s weaker seasons and exploiting them when the coach will probably rely on them against the Leafs big guns. That doesn’t mean they aren’t capable of having a strong game, but that’s their best bet of exploiting anything, otherwise this is just going to be a very entertaining and fair fight. Well, there’s the goaltending mismatch, but that’s always the case with Campbell having as good of a season as he is.
Uncategorized
Recent articles from Scott Maxwell