Kurtis Gabriel, his fight with mental health, and why talking about it matters 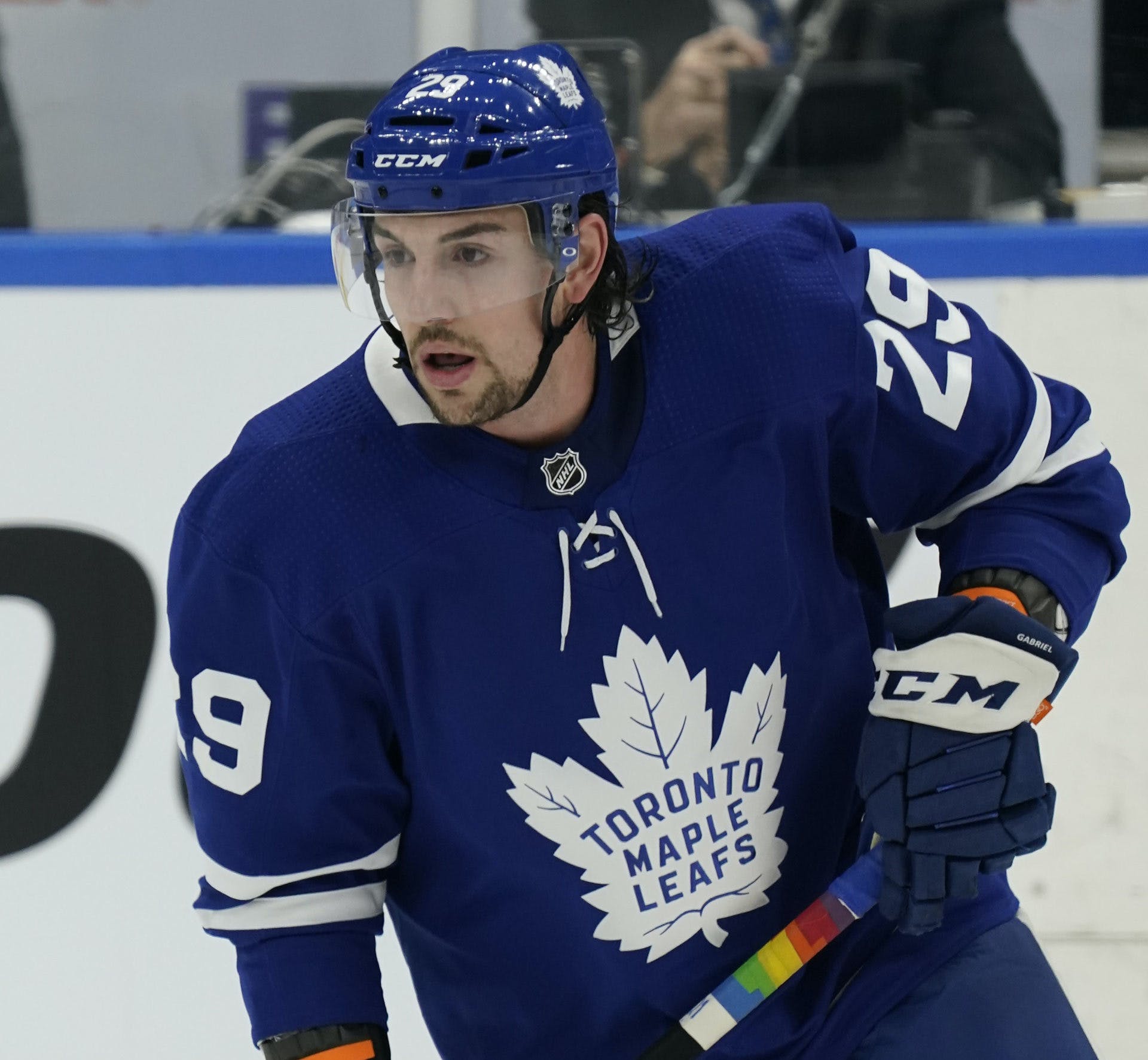 By Nick Barden
1 year ago
Mental Health matters. Always.
It helps people get out of bed in the morning. More importantly, though, it helps people survive.
At some point in your life, you’ve had your battle with mental health. When you lose someone close to you, it can change everything. If you get bullied throughout school, it sometimes sticks with you for an incredibly long time. Whether it’s family or personal struggles, it’s impacted you in some way, shape or form.
In the game of hockey, it’s not spoken about enough.
We’re starting to see a shift in that, though. With players like @Jonathan Drouin and @Carey Price leaving the game of hockey to focus on themselves, it brings a new outlook. And with teammates, like @Josh Anderson, who praise them for doing what’s right for them. It’s incredibly uplifting, and it looks like there’s change.
But at what rate?
It was the final practice before the Marlies left for their first road trip of the season. The bus was waiting outside Coca-Cola Coliseum, but @Kurtis Gabriel still gave his time to speak with me about his life.
The 28-year-old’s story is powerful.
Growing up in Newmarket, Ontario, Gabriel had a dream like any other child who loved the game of hockey.
That was to play in NHL.
At 10-years-old, he was playing Triple-A hockey and was in a great place until the unfortunate happened.

(Editor’s note: This interview took place outside the Marlies dressing room, with players and staff walking back and forth. After he told me about his father’s passing, I said that we didn’t have to talk about it here because I didn’t know if it was the right place for him to open up about it. But Gabriel was confident that he wanted to share his story. And that speaks volumes to the type of person he is.)
At that point in his life, everything stood still. Gabriel didn’t know how to react. He was lost.

“Back then, I thought it was just cause he was weak and he didn’t want to be around for us, and I kind of used that as fuel even though that was improper.” Said Gabriel. “The stigma of mental health has gotten better and you’re educated through all these different things, you realize that ‘Oh, my dad wasn’t weak, he was sick.’“

“When I was 10, I lost all confidence in hockey when he was gone because he was pushing it behind me. So, I think I just went back to having fun playing hockey, as a young person.” Said Gabriel. “And then, as I got older, I turned it into fuel. I think you either let it bother you or let it fire you up, and I chose to let it fire me up, even though it was the wrong reasons.“

It wasn’t until a few years after his father’s passing that Gabriel found out it was a suicide. He also found out that his dad did reach out for help, but it was too late.

“He did reach out for help, I found out later. But our family doctor couldn’t get him to see someone until a week later, and he couldn’t make it to that week later.” Said Gabriel. “So, maybe if the stigma is what it is now, he could’ve reached out to one of his basketball friends, and say: ‘Hey, I’m struggling’, like, ‘Can I crash at your place for a week? I’m scared of myself.’ Something like that, right? Where he would feel like he’s not a weak person.“

When it happened, Gabriel said he was upset. He talked about getting mad and how it was for no reason. Now, the 28-year-old wants to play for his father.

“It’s funny how, then realizing later, I was getting mad about nothing. And then, kind of, ‘Okay, well, he did want to be around, he did want to see me play in the NHL’ and it’s sad that he couldn’t. So now, I’m just gonna try to honour that and do as best as I can.“

The Marlies have a few players who have shared their battles with mental health, like @Rich Clune and @Josh Ho-Sang. When you meet people who have been through those battles, it helps.

“Sanger [Ho-Sang] is a younger guy that’ll talk about it one-on-one and Dicky’s [Clune] the guy that’s our captain that’ll talk about his problems very frankly. It’s funny how his problems ring true with someone who I know in my life who’s going through the same kind of thing.” Gabriel Said. “He knows that being vulnerable is okay now. He’s seen Simone Biles do it, he’s seen all these people speak out at the highest level of sport. He’s like ‘if they can do it, then I can do it. If Dicky can do it, I can do it.’ So that’s how we gotta help eachother, by keep pumping out these stories. And you don’t know who it’s gonna reach — it’s crazy the reach of social media.“

But it also shines a light on how important it is to talk to someone. Sometimes anyone.

“It’s everything.” Gabriel said when asked about the importance of talking. “I can be going through something, regardless of my dad, just my own mental health. Like everybody goes through it to varying degrees. I could be going through something and I can know the answer, but until I go talk to someone and hear it from their perspective — and they’re really going to tell me the same thing — but hearing that someone else is bringing themselves down to my level and empathizing with me, that’s what makes you feel like you have community to get through it.”
“That’s everything. If you keep stewing in your own head and being your own echo chamber, you might tell yourself the right things, but you never kind of get yourself out of it.” Said the 28-year-old. “We’re social beings, you have to reach out and think that ‘I’m not weak by reaching out, I’m stronger, like, I’m not afraid to be vulnerable.’“

When Gabriel isn’t on the ice, he’s an advocate for mental health. He’s also an advocate for the LGBTQ+ community. Whether it’s sharing stories on Instagram or Twitter to responding to messages from hockey fans, the 28-year-old is trying to spark change.

“I’ll have people DM me and they’ll be like ‘Oh, something happened’ or you know, ‘My girlfriend is bothering me,’ and I’m like ‘Dude, you gotta be vulnerable. Go tell her how you feel. Don’t act like all tough and masculine.’ Strength comes from vulnerability, so asking people for help when you need it, talking to a people, getting a second opinion, getting a third opinion, going to talk to a psychotherapist, that’s what you have to do.“

Gabriel wants to help end the stigma around mental health by supporting others. And he’s going to do that as much as possible.

“I play on the Marlies and all those things, but I still go through my problems. So, I have to find meaning too, so I love talking to people. People helping people is how the world goes round. There’s a different type of happiness when you help others, other than yourself. And it’s funny how it comes back around. You do something charitable, you do something nice, but the world has a funny way of paying you back and bringing it back around.“

Gabriel, though, can’t always get to every message. Being a professional hockey player takes a lot of time out of your life as it is, plus adding family time — he can get busy.
But if there was one message he could share with anyone who’s going through mental health struggles right now, what would it be?

“That it’s gonna get better.” Gabriel said. “I mean, I haven’t been clinically depressed, but I think I’ve gotten as far as you can without being diagnosable. So, everybody can’t relate to that, but, for people I’ve talk to, things are gonna get better. Some people have deeper downs and higher highs, but life always comes back to the middle. If there’s a big up, you’re gonna have a big down. It’s just kind of how it works. It’s a rollercoaster, and you gotta try and keep your head at it and even when it’s really bad, it’s not as bad as you think, and when it’s really good, it’s not as good as you think.”
“There’s always better days ahead, and if you feel like there are not, that is a massive signal to talk to someone.“

If you’re struggling with anything in regards to mental health or addiction, CAMH and CMHA are both here to help within the Toronto and Canada area. In the US, NIMH is a great resource to find help.
And if you’re ever in a crisis and need to speak with someone, text HOME to 686868 for immediate help.
Uncategorized
Recent articles from Nick Barden