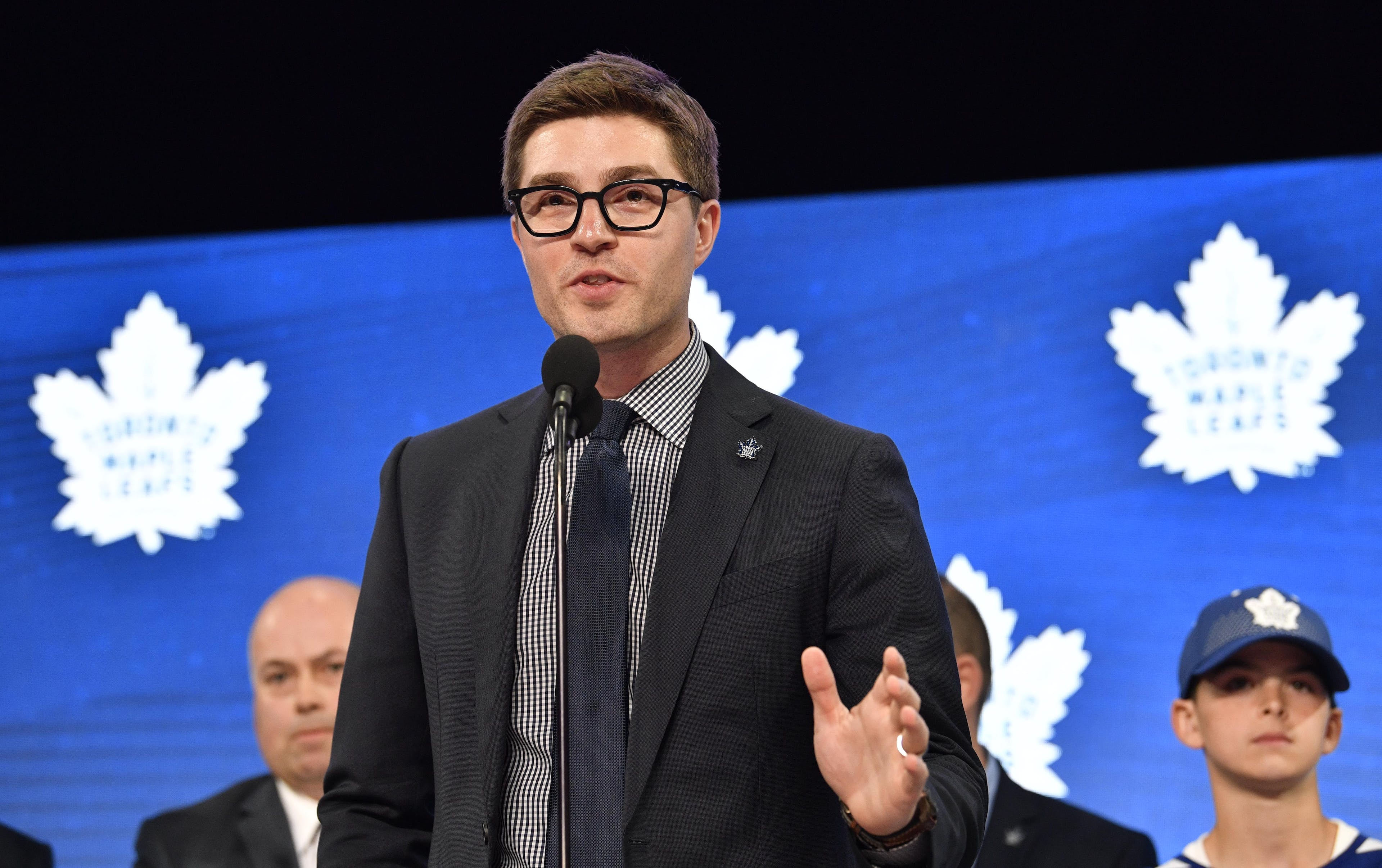 By Mike Gould
1 month ago
Kyle Dubas made exactly 12 trades while performing his duties as general manager of the Toronto Maple Leafs this year. Today, we’re going to rank them.
Why? Well, quite frankly, it’s the holiday season and not much else is going on. We also know you’re probably reading this while taking a quick break from your last-minute Christmas shopping at some horrifyingly busy mall.
So we’ll keep the exposition brief. A dozen trades, a dozen grades. We’ll start with the worst and move upward from there. Cool? Cool. And yes, we mean every trade, big and small.
Be prepared to see a lot of the Arizona Coyotes on this list. In fact, we’ll begin with one of two deals the Maple Leafs made with the ‘Yotes back in February. Here goes nothing …

February 19: Maple Leafs send Nick Ritchie and a conditional 2025 2nd to Coyotes for Ilya Lyubushkin and Ryan Dzingel
Even this one wasn’t so bad. The real mistake was signing Ritchie in the first place — this won’t be the last time we’ll say that — and Dubas managed to get a reasonably useful rental defenceman in Lyubushkin back for him. Dzingel ended up lasting all of two days in Toronto (playing zero games) before being claimed off waivers by San Jose, but he wasn’t exactly a big loss.
The real sacrifice was the pick, but it’s still three drafts out. Arizona is all but certain to take the 2025 2nd instead of exercising their right to swap it for Toronto’s 2023 3rd. The Coyotes score some points here by juicing Ritchie’s value with plum minutes to the point where they’ll likely be able to flip him for another pick, but the Leafs accomplished what they set out to do with this trade — even though they were cleaning up after themselves.

July 7: Maple Leafs send Petr Mrazek and 2022 1st (No. 25 overall) to Blackhawks for 2022 2nd (No. 38)
Essentially, the Maple Leafs managed to offload the final two years of Mrazek’s contract (carrying a $3.8 million AAV) in exchange for dropping 13 spots in the draft. And the wild thing is, you could make a decent case that Toronto ended up picking a better prospect at 38 (Fraser Minten) than Chicago did at 25 (Sam Rinzel).
Losing that raw pick value wasn’t ideal but, much like the Ritchie trade, this was a move the Maple Leafs had to make. Still, it’s another instance of them cleaning up their own mistakes. This deal gets a better grade than the Ritchie/Lyubushkin swap because they were still able to get a good pick back.

February 21: Maple Leafs send Future Considerations to Coyotes for Carter Hutton
The Maple Leafs wanted an extra goalie as insurance for their playoff push. Hutton, at the time, was injured and didn’t want to leave his family in Arizona. The Leafs let him stay with the Coyotes’ AHL club in Tucson until they needed to bring him up for a few skates with the team in Toronto. But the veteran goaltender never played another professional game after the trade and ended up retiring over the summer.

December 19: Maple Leafs send Denis Malgin to Avalanche for Dryden Hunt
In all likelihood, this deal will be all but forgotten within a few months. With all due respect to both Malgin and Hunt, they’re not exactly superstars. Malgin is younger and profiles a little better on the surface; Hunt is probably better suited to a depth role. Maybe the Leafs “lost” this deal, but does anybody really care?

March 21: Maple Leafs send Alex Biega to Predators for Future Considerations
Biega played 17 games (all in the AHL) after this trade and then retired, so the Leafs didn’t exactly give up much. This was more a case of them shedding a contract after taking on a couple in a big trade with Seattle the previous day — more on that one later.

July 8: Maple Leafs send 2023 4th to Predators for 2022 4th (No. 122)
The Leafs ended up using the pick they got from Nashville to select Dennis Hildeby, who is wonderful. Nashville may well take Dennis Hildeby 2.0 with Toronto’s pick next year, but it’s impossible to know for sure. In the meantime, the edge goes to the Leafs.

July 8: Maple Leafs send 2022 3rd (No. 79) to Golden Knights for 2022 3rd (No. 95) and 2022 5th (No. 135)
The Golden Knights used pick No. 79 to select centre Jordan Gustafson from the WHL’s Seattle Thunderbirds. In turn, the Leafs used their picks to take Nick Moldenhauer (No. 95) and Nikita Grebenkin (No. 135), both of whom are off to pretty strong starts after being drafted. Gustafson has been merely alright on a stacked Seattle team this year.
In terms of pick value, the Leafs did OK to add a 5th in return for dropping 16 spots in the third round, and the early returns favour the guys they selected. Grebenkin is producing in the KHL as a teenager!

March 20: Maple Leafs send Travis Dermott to Canucks for 2022 3rd (No. 79)
Two things are true:
All things considered, the Leafs did pretty well to pull a third-rounder out of Vancouver for Dermott. He’s not a bad player by any means, but he’s also missed a lot of time with injuries over the years and isn’t better than Rasmus Sandin, Timothy Liljegren, or even Conor Timmins. Plus, Dermott costs $1.5 million; Timmins costs $850k.

November 23: Maple Leafs send Curtis Douglas to Coyotes for Conor Timmins
This one gets high marks both for the player the Maple Leafs received and how little they gave up. Timmins is a talented young defenceman who has struggled to stay healthy in both Arizona and Colorado, but he’s looked pretty darn good in spot duty since joining the Maple Leafs late last month.
Douglas, meanwhile, is certainly big. He’s potted a couple goals since joining the Coyotes’ AHL affiliate in Tucson, too. But, even at 6’9″, it’s highly unlikely he ever cracks the NHL in any significant capacity. Timmins’ ceiling is much higher and, frankly, so is his floor.

July 11: Maple Leafs send Future Considerations to Senators for Matt Murray (25% retained), 2023 3rd, and 2024 7th
It’s wild how perceptions can change overnight. The Leafs were paid two draft picks to take a goaltender who is 8–2–2 with a .925 save percentage for them this season. Meanwhile, the Ottawa Senators’ team save percentage this year is .901. Ouch!
The Murray trade was obviously risky from the start for the Leafs. He’s as injury-prone as any player in the league and, to put it generously, he was inconsistent during his tenure in Ottawa. But it’s pretty incredible that the Maple Leafs were able to add two top-10 goaltenders in the NHL this season in terms of save percentage without giving up a single asset. The Murray–Ilya Samsonov tandem has been better than anyone (except maybe Kyle Dubas) saw coming.

March 20: Maple Leafs send 2022 2nd (No. 58), 2023 2nd, and 2024 3rd to Kraken for Mark Giordano (50% retained) and Colin Blackwell
Highway robbery. We’ve all seen what Giordano has done for this Maple Leafs team since being acquired. Even at age 39, he’s an incredible stabilizer and a true bargain at $800,000 for this season and next. Dubas somehow managed to nab Giordano and a decent checking centre without giving up a first-round pick, and he even got the Kraken to retain half of Giordano’s salary for the 2021–22 season.
Bonkers! Easily Dubas’ best deal of 2022, and it’s up there for his entire tenure as GM.
Editorials
Recent articles from Mike Gould