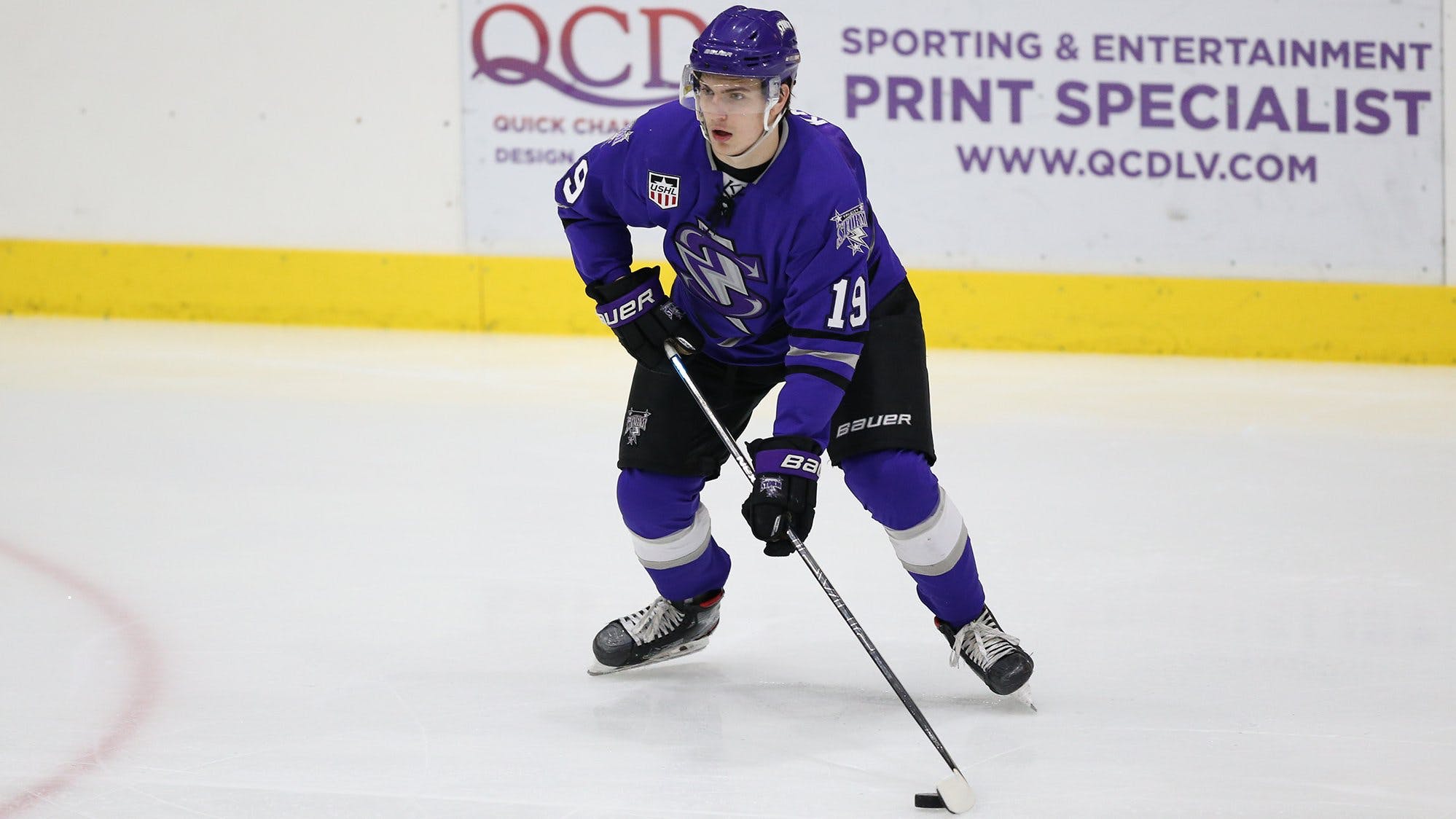 By Kyle Cushman
1 year ago
Scouting the past year and a half has been strange, to say the least. No OHL games were played, resulting in numerous prospects heading overseas to play in random European leagues. The QMJHL started…then stopped for five weeks. WHL prospects played minimal games but were limited to in-division opponents only. And biggest of all, at any time a team or player could be shut down and have their entire season impacted with a positive COVID test.
That last group is the one that Toronto Maple Leafs 2021 second-round pick Matthew Knies falls into and is a major factor as to why the Leafs decided to bet on Knies despite a relatively disappointing season in the USHL.
Heading into the 2020/21 USHL season, expectations were high for Knies. The previous year, Knies had led the USHL in total points and points-per-game among prospects eligible for the 2021 Draft. That’s more points than Matt Coronato and Mackie Samoskevich, two USHL regulars who went in the first round, as well as a higher scoring rate than the USNTDP’s Matthew Beniers and Chaz Lucius, who also became first-round picks.

When the 2020/21 season started though, it was a struggle out of the gate for Knies. He scored just one goal in Tri-City’s first four games before COVID derailed his early-season even more.
Knies tested positive for COVID and Tri-City’s schedule was in flux. Games were being postponed and rescheduled. The first two months of the season, Knies played just seven games due to his own positive COVID test and Tri-City’s rescheduling of games.
The chaos that was Tri-City’s first half took a toll on Knies and his production suffered because of it. Knies scored just four goals and 13 points in 21 games during Tri-City’s first half of the season, good for 0.619 points-per-game and only a 27-point pace over the full 44 games he ended up playing.
When the games started to come thick and fast in the second half, Knies was able to settle in and find the game he showed so well in his underage season. After finding his rhythm and recovering from COVID, Knies scored 13 goals and 29 points in 23 games during Tri-City’s second half of the season, good for 1.261 points-per-game and a strong 55-point pace over the 44 games he played.

Looking at the season as a whole, Knies dropped from the highest scorer among 2021 eligibles in the USHL in 2019/20 down to 8th in 2020/21 by points-per-game. With his season-long production stagnating like this and some of his peers making significant strides, it’s easy to see why Knies fell to the back half of the second round despite his first-round potential heading into the year.

Those second-half results are exactly what the Toronto Maple Leafs are betting on in Matthew Knies. Simply put, had Knies scored at that 1.261 PPG pace the entire season, there’s no chance his 6-foot-3 frame is available that late into the draft.
The Leafs staff haven’t made it a secret either, given the aforementioned comments in the post-draft availabilities regarding Knies.
“It’s always great to see somebody that struggles, then comes through it and emerges, and has that ability to do so. I think that’s what we saw from Matthew this year,” said Kyle Dubas in his post-draft presser, a sentiment reiterated by John Lilley.
“We really valued his game as an underager in the USHL,” said Lilley. “Didn’t have the first half people anticipated, but he bounced back and had a really good second half. He really showed what he was capable of.”
The Leafs bet on Knies has looked promising already after Knies’ standout performance at the World Junior Summer Showcase. He’ll be heading to the University of Minnesota this fall, where he will look to claim a place in their top six and push towards a role on the American World Junior squad come Christmas time.
Statistics from EliteProspects and USHL.com, Quotes gathered from MapleLeafs.com
Content
Recent articles from Kyle Cushman