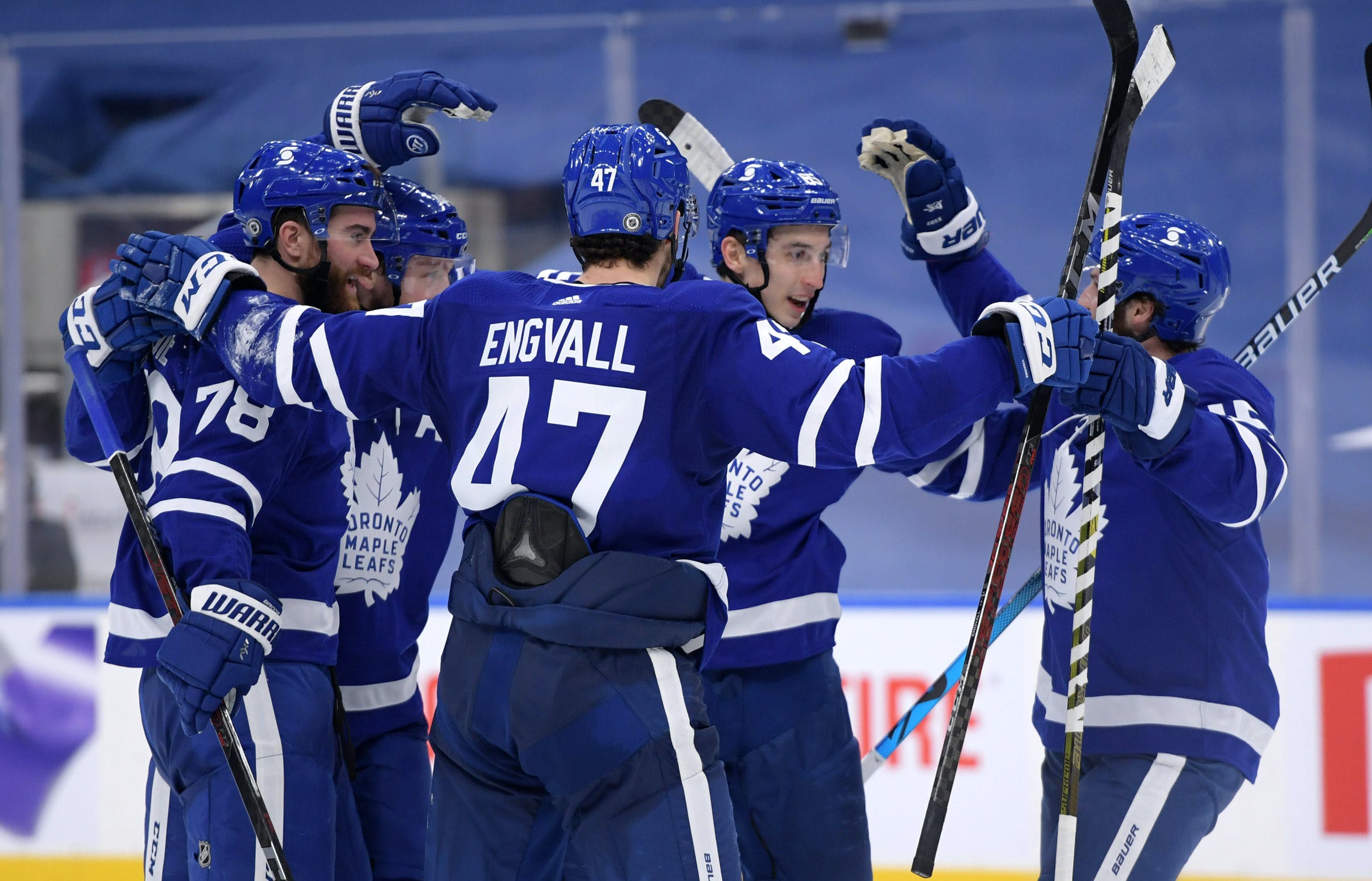 By Roxanne Khasow
1 year ago
As the puck dropped at Scotiabank Arena for the second game in the Toronto Maple Leafs and Winnipeg Jets series, you could tell that the Leafs were waiting to get this game going and break their losing streak. With an early chance by Mitch Marner, and a breakaway by William Nylander, the boys in blue were clearly ready to go. A good look by Joe Thornton and Auston Matthews, and then by Pierre Engvall, but nothing was able to make it past Connor Hellebuyck, just yet.
With just under four minutes to go in the first period, the Leafs turnover the puck, as Pierre-Luc Dubois tipped it out of the air, held on, and passed to Nikolaj Ehlers, who got it past Frederik Andersen, which gave the Jets a 1-0 lead.
As the puck dropped for the second period, the Leafs were buzzing around the ice. Just over three minutes into the period, the Leafs made a play around the boards, from TJ Brodie to Matthews, who tried to get the puck through the traffic at the front of the net. Marner picked up the rebound and got the puck to the back of the net, tying the game, at 1-1.
Both teams continued to have a lot of good chances on both sides of the ice. This game was a lot more even than what I wanted it to be, to be honest. Just around the halfway mark into the period, Kyle Connor made a bit of a breakaway down the ice, passed it to Ehlers who had a clear shot, that made it right past Andersen, which gave him his second goal of the game, and the Jets a 2-1 lead.
This clearly didn’t sit well with the Leafs at all. A few unbelievable chances by Nylander, Marner, and Engvall, but nothing to show for it. Hellebuyck was playing an amazing game and not letting the Leafs get anything past him. The Leafs continued to put on the pressure as they held the Jets without a SOG for 9 minutes, and ended the period outshooting the Jets 24-16.
As the puck dropped for the third, the only thing on my mind was which Leaf is scoring the next goal? The team was playing so well and something had to give eventually, right? Just over six minutes into the period, John Tavares soared down the ice and passed it to Nylander who finally got the puck past Hellebuyck, tying it up once again at 2-2.
The fun didn’t stop there. Just over 12 minutes into the period, Alexander Kerfoot made a pass to Ilya Mikheyev from behind the net and he got a quick shot past Hellebuyck, which gave the Leafs their first lead of the night, making it a 3-2 game.
With their first lead of the game, all I wanted the Leafs to do was to play a tight game, close out the period, and take the W. But the Jets had other plans and managed to get another goal with less than three minutes to go as Paul Stastny tied it up, making it a 3-3 game. Neither team managed to score another in regulation, and this one would be decided in OT.
As the puck dropped for overtime, the Leafs started with Matthews, Marner, and Rielly to get things going. And less than one minute into OT, Rielly feeds the puck to Matthews as he got it to the back of the net and scored the GWG, giving the Leafs their first win in over a week and breaking their 3 game losing streak.
Most Valuable Leaf: William Nylander
Oh, Willy Styles. From the first period to the end of this game, Nylander played a very strong and smart game of hockey. He had a lot of good chances on net, and wasn’t letting up until he got something past Hellebuyck. His frustration and perseverance paid off, and his goal helped get the team going. For the flow, the nickname, and for his outstanding play tonight, Nylander is my MVP of the night.
Least Valuable Leaf: Travis Dermott
The Leafs dominated the first period of this game and had many chances that should have gone to the back of the net. The turnover by Travis Dermott which lead to the Jets scoring and the first goal of the game was a messy play that could have been avoidable. In my opinion, the first goal of the game always makes a difference. Maybe this game didn’t have to go into OT if it wasn’t for that play, who knows.
Tweet of the Night:
Every day I am reminded of how lucky we are that Auston Matthews is a Toronto Maple Leaf.
What’s Next?
The Leafs look to stay in the W column, as they take on the Winnipeg Jets for their last game in this series on Saturday March 13th. Tune in for some good ol’ Saturday night hockey on CBC and Sportsnet at 7:00PM.
Uncategorized
Recent articles from Roxanne Khasow