Leafs kick off California road trip with rematch against the Kings 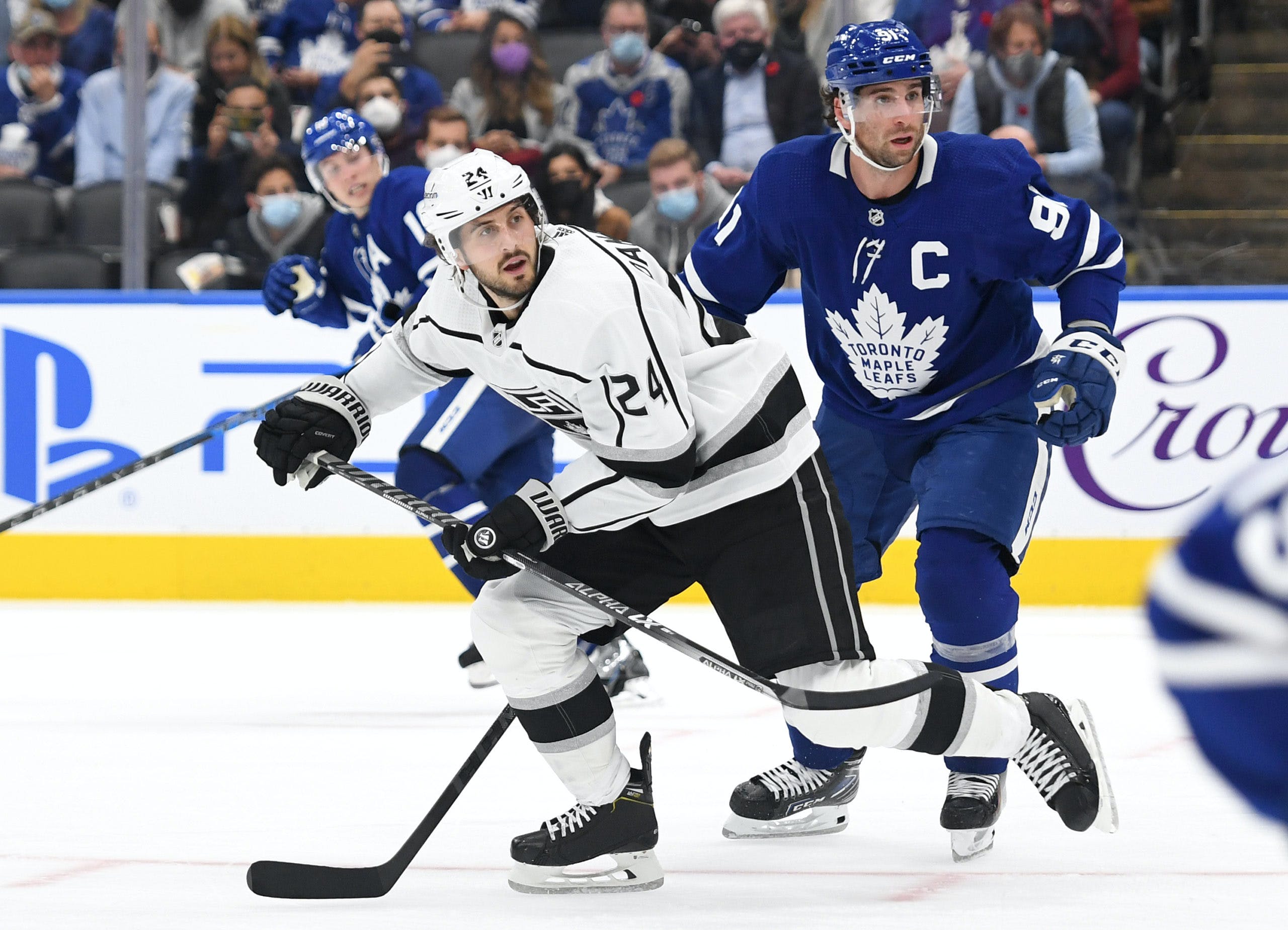 By Nick Richard
11 months ago
The Leafs have been doing a lot of winning lately – 11 of their last 13 to be exact – but one of those two losses came in a lackluster showing against the Los Angeles Kings just over two weeks ago. It was an off night for the Leafs but it wasn’t as lopsided as the 5-1 score indicated and the Leafs were able to shake it off and get back on track to win their next five games. They will be looking to avenge a loss against a Kings team that has struggled to score goals during a stretch that has seen them go 2-2-2 since their last meeting with the Leafs.
Wednesday night’s matchup will serve as a homecoming of sorts for @Jack Campbell, @Jake Muzzin, and @Kyle Clifford who was recently reacquired and subsequently recalled to the Leafs’ roster. Though it feels like they have been with the club for a long time, Wednesday will be the first time that Campbell and Muzzin take the ice at Staples Center as members of the Maple Leafs. The Leafs were last in California right before the pandemic shut down the NHL season – and everything else – and Campbell sat on the bench serving as @Frederik Andersen’s backup while Muzzin was forced to watch from the press box as he recovered from a broken hand.
One of the players that went to Los Angeles in the Muzzin trade back in 2019, @Sean Durzi, also appears set to make his NHL debut against the team that selected him in the second round of the 2018 draft after being recalled by the Kings on Tuesday. The 23-year-old defenseman is having a great season with the Ontario Reign, sitting on five goals and 11 assists in just 13 games – good enough for second among all AHL blueliners.

The Leafs recalled Clifford after just two games with the Marlies but it appears that he will be on the outside looking in as the Leafs stick with the same lineup they iced in Sunday’s 3-0 win over the Islanders.
After a stint on the fourth line, @Michael Bunting looked rejuvenated in his return to the top unit and helped create plenty of opportunities for @Mitch Marner and @Auston Matthews with his tenacity and underrated small-area passing game. @Nick Ritchie was moved to the third line alongside @David Kampf and @Ondrej Kase, and had a strong game with a couple of big hits and an assist off of a nice retrieval on the forecheck that led to Kaše’s third period goal. The fourth line was buzzing as well as @Pierre Engvall’s speed brought an element that group had been missing, and he helped wreak havoc on the forecheck with @Wayne Simmonds who has been playing perhaps his best hockey as a Leaf in recent weeks.
The one group that had a bit of a rough night against the Islanders was the trio of @John Tavares, @William Nylander, and @Alexander Kerfoot. They have been one of Toronto’s most consistent forward lines as Kerfoot seems to have found a home on the left wing and they will be looking to bounce back against the Kings on Wednesday night.
The Leafs have employed a rotation at the bottom of their defensive unit for most of the season but they went with the same group in the second half of a back-to-back following a loss to the Penguins on Saturday night. We probably won’t know for sure until closer to game time, but don’t be surprised if @Travis Dermott draws back into the lineup in place of @Rasmus Sandin or @Timothy Liljegren as the Leafs’ coaching staff looks to keep everyone engaged and game-ready.
The Kings’ forward group may not have the same star power that the Leafs have but they have a formidable top-six led by their captain @Anze Kopitar who has tallied eight goals and nine assists through 18 games. Their second line is centered by defensive specialist @Phillip Danault – a player Leafs fans are all too familiar with – and features @Alex Iafallo who is second in team scoring with 13 points in 18 contests. With the Kings having last change on home ice, you can rest assured that the Matthews line will once again see a healthy dose of Danault.
On the back end, the only change from the lineup posted above appears to be the aforementioned Sean Durzi taking over for @Kale Clague on the third pair. It is sure to be a special night for the Ontario native as he makes his NHL debut against the team that drafted him.

Jack Campbell | 10-4-0 | 1.66 GAA | .944 SV%
Campbell has been arguably the best goaltender in the NHL through the early part of the season but had perhaps his roughest performance in the 5-1 loss to the Kings where he gave up four goals on 28 shots. He has stopped 146 of the 150 shots he has faced in five starts since then and will be looking to continue his strong play to earn a victory against his former squad.

@Jonathan Quick | 4-4-0 | 1.88 GAA | .939 SV%
After a few rough seasons, Quick has returned to his old form early on in 2021-22. He was solid in the last matchup against the Leafs, stopping 33 of the 34 shots Toronto put on net and will get another chance to shutdown one of the league’s most star-studded lineups.

Tale of the Tape courtesy of Mark Norman