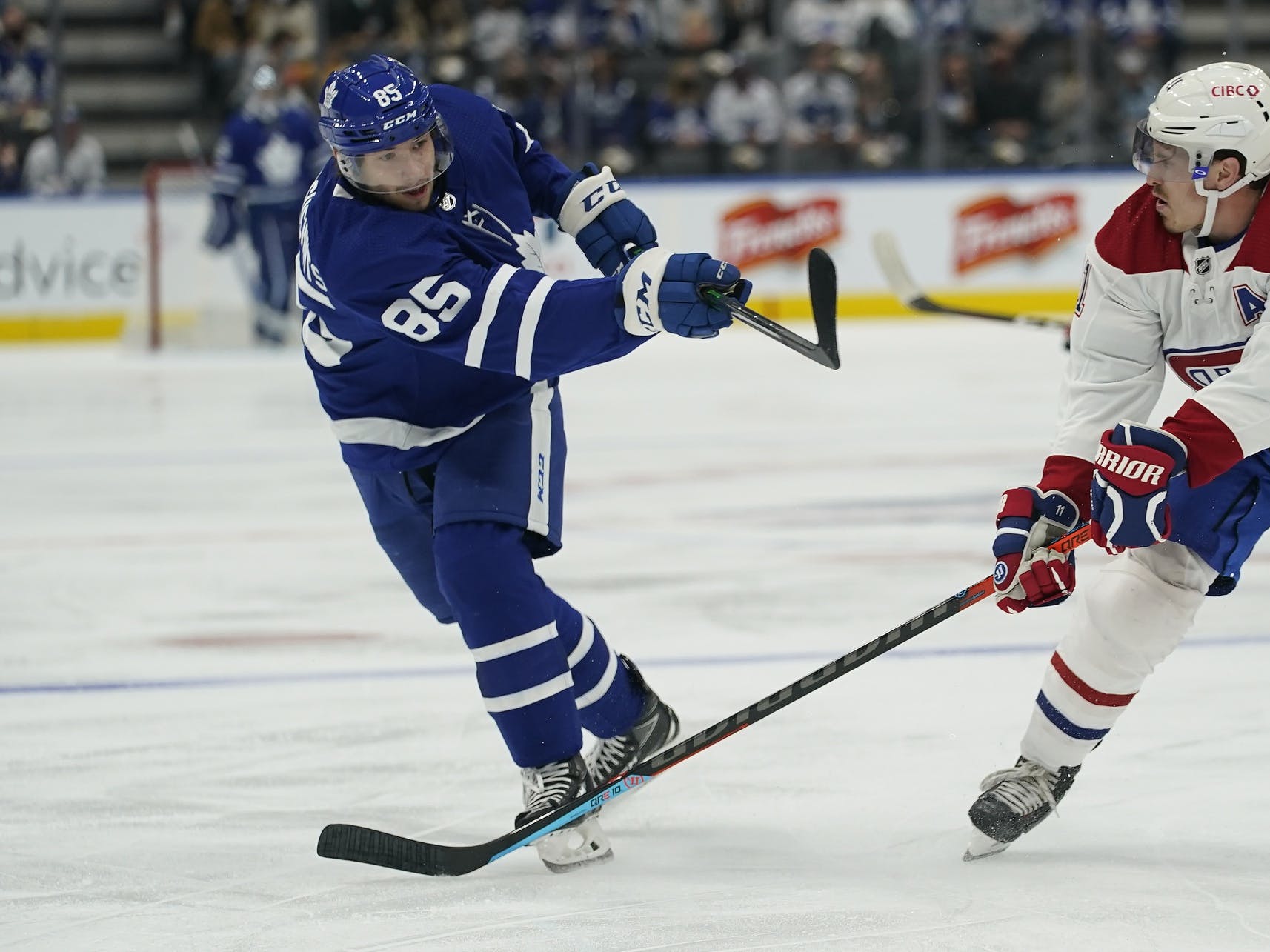 By Mark Norman
1 year ago
The Leafs announced five fresh cuts after Tuesday night’s 6-2 preseason win over the Montreal Canadiens. The moves, coming on the heels of the announcement that Josh Ho-Sang had signed an AHL deal with the Toronto Marlies, push the Leafs closer to what their opening night roster will look like.
None of these moves are all that surprising, and likely would have happened earlier today if the Leafs did not need warm bodies in their lineup for tonight’s preseason game. In other words, they were formalities.
Semyon Der-Arguchintsev in particular had a strong Traverse City prospect tournament and NHL camp with his customary playmaking and stickhandling abilities on full display. But what was interesting to see was the incorporation of a shooting element that had been deemed missing from his game. Here’s SDA scoring tonight on a sweet bar-down wrister:
While neither Kristians Rubins nor Mac Hollowell had standout camps and were always destined for the Marlies, most Leafs fans would probably tell you they thought Rubins had the stronger, steadier camp. While Hollowell still shows promise as a puck mover, this year is a critical one for him to show the Leafs what he can do at the professional level. Hollowell enters the 2021-22 season in the last year of his entry-level contract.
Erik Källgren did not see any game action this preseason and has spent the last two preseason games as backup goaltender for the Leafs while they give their more established goaltenders comfier seats in the arena. With Joseph Woll and Ian Scott injured, there are starts up for grabs between Källgren, @Michael Hutchinson (if he clears waivers tomorrow), and Keith Pettruzelli.
Lastly, @Nikita Gusev lost the PTO war to Ho-Sang. There was probably only ever going to be one man left standing, and to his credit Ho-Sang grabbed the bull by the horns from the very first puck drop of the preseason. Gusev struggled to make much of an impact in the games he played and his lack of intensity was surprising from a 29-year-old who was probably getting his last shot at the NHL. Expect Gusev to head back to the KHL.

With these moves the Leafs have 33 players left in camp (locks in bold):
Forward
Adam Brooks
Brett Seney
Alex Kerfoot
Auston Matthews
David Kampf
Ilya Mikheyev
Jason Spezza
Joey Anderson
John Tavares
Kirill Semyonov
Kurtis Gabriel
Michael Bunting
Mike Amadio
Mitch Marner
Nick Ritchie
Ondrej Kase
Pierre Engvall
Wayne Simmonds
William Nylander
Defence
Alex Biega
Brennan Menell
Carl Dahlstrom
Jake Muzzin
Justin Holl
Morgan Rielly
Rasmus Sandin
Timothy Liljegren
TJ Brodie
Travis Dermott
Goaltending
Jack Campbell
Joseph Woll (injured)
Michael Hutchinson (on waivers)
Petr Mrazek
In terms of what is likely to happen, the Leafs will probably start the season with a 21-man roster of 13 forwards, 6 defencemen, and 2 goaltenders which includes @Adam Brooks as a 13th forward. This would give the Leafs $480k in cap space entering the season. In a perfect world where waivers did not exist, that 21st spot would have likely gone to @Timothy Liljegren who has had a strong camp, but his waiver eligibility likely makes him the odd-man-out simply for asset management reasons. @Pierre Engvall’s time as a Leaf is likely done: he makes $500k more than Brooks while not being $500k worth of better hockey player. With the Leafs pressed up against the flat cap, he is the likeliest casualty.
With the Leafs’ regular season starting next Wednesday, October 13th, it should be an intriguing next week as they whittle down to a finalized NHL roster. Stay tuned for more.
Uncategorized
Recent articles from Mark Norman