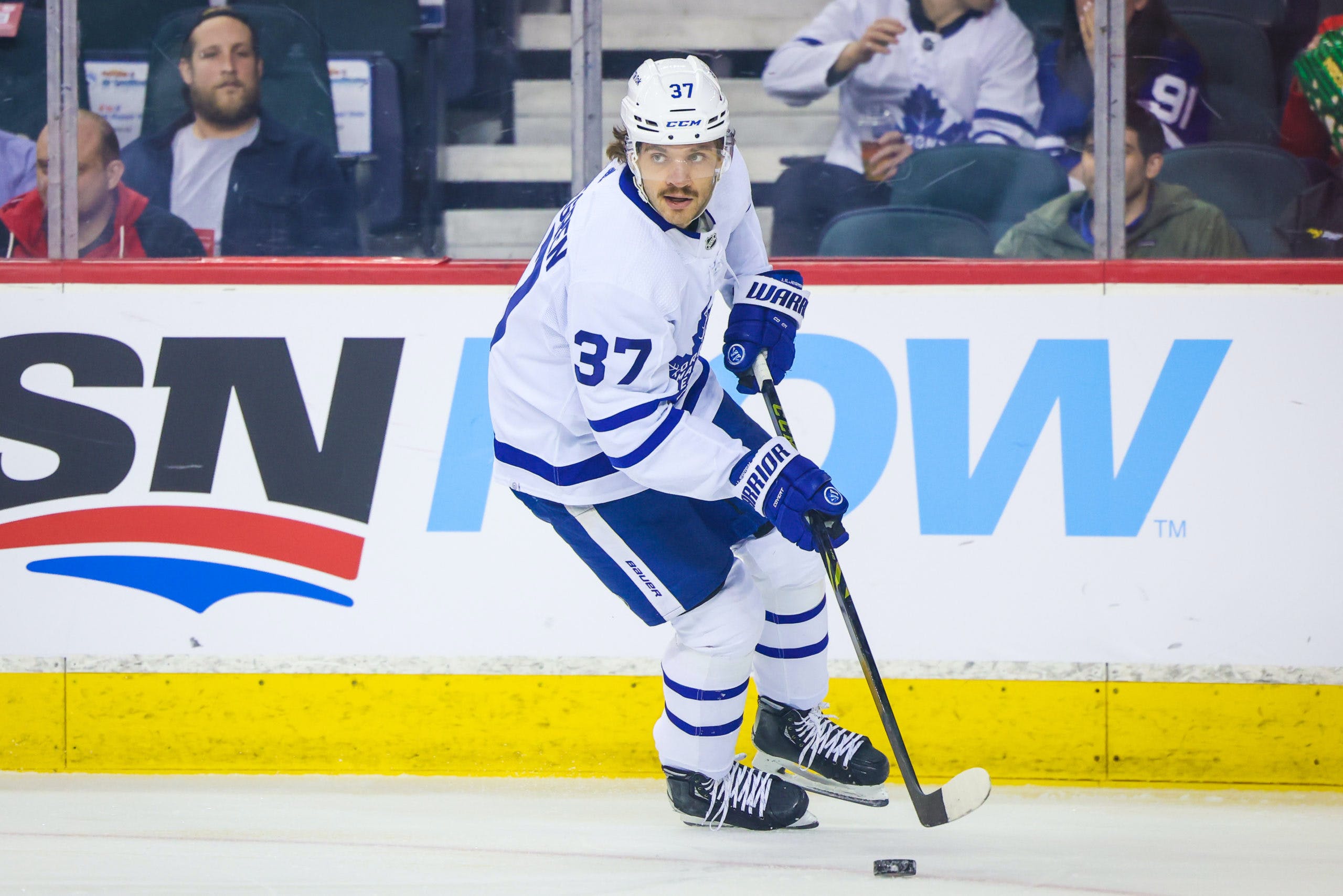 By Nick Barden
4 months ago
Maple Leafs training camp got underway on Wednesday morning, beginning with GM Kyle Dubas addressing the media.
One his first orders of business was to discuss the injuries plaguing Toronto heading into what could be one of the most important seasons this core group has faced.
When Toronto’s training camp roster was revealed on Wednesday, there were four players at the bottom of the list noted as “injured.” Those players included Timothy Liljegren, Pierre Engvall, Mikhail Abramov, and Joseph Woll.

Many got word of both Liljegren and Engvall’s injuries on Tuesday, hearing that both might not be able to participate in training camp. And as it stands right now — after Dubas spoke on Wednesday — it seems like that still might be the case with one exception.
“I’ve got [Mikhail] Abramov with a back injury. Obviously did not participate at the prospect tournament in Traverse City and is not participating in training camp.” Said the Maple Leafs’ GM. “[Joseph] Woll continues to recover from a shoulder operation that he has at the end of last year as everybody knows. Continuing to progress well, will be re-evaluated in the fall in regards to a timeline for return.
“We’ve got [Pierre] Engvall; will not be participating at the start of camp. Sustained an ankle and foot injury in training in Sweden. He’ll be re-evaluated the week of October the 3rd and we’ll have a further update at that time. We’re hopeful that Pierre will be cleared at that time and will be able to get into the final group of exhibition games, but we’ve got to do what’s best for his long term. And so, we’ll have a further update that week of October the 3rd.
“And then we have [Timothy] Liljegren. Timothy sustained a hernia that was diagnosed upon arrival here. [Liljegren] had an operation on Friday, went successfully. He’ll be out a minimum of six weeks, so we’re looking at a early to mid-November projected return, if everything goes well.”
These injuries will offer up a lot of opportunity heading into the first on-ice session of Maple Leafs training camp, beginning on Thursday. With Engvall out for the first few weeks of camp, there’ll be plenty of players like Nick Robertson and Alex Steeves challenging for spots.
There’s also Zach Aston-Reese, who Dubas says was signed to a PTO once they found out about Engvall’s injury.
“When the news of Pierre came in, that’s when we executed the tryout agreement for [Zach] Aston-Reese.” He said. “But then, this is the first time, I think going into the year where I look at our own internal guys, and if you’re them today, you feel you’ve got a great chance.”
The additions of Jordie Benn and Victor Mete, on defence, have proved to be valuable early on. They seem to be the likely candidates to challenge for Liljegren’s role as opening night approaches. However, the Maple Leafs GM also mentioned the names of Carl Dahlstrom, Filip Kral, and Mac Hollowell.
The expectation, though, is that one of either Benn or Mete begin the regular season in Liljegren’s spot, unless Rasmus Sandin signs in the next few days.
Dubas, on Wednesday, also gave an update on Maple Leafs prospect, Rodion Amirov, who as we know has began travelling and skating with his KHL club, Salavat Yulaev.
“[Rodion] Amirov; we had a follow up with he and the doctors that are managing it from Moscow and Germany.” Said Dubas. “It’s obviously become a more difficult situation to manage in person as things have developed in Europe. So, where he’s at is that he’s through his final round of chemotherapy, and what we’re working on now is a consultation appointment with an immunologist to see if he’s able to travel over here and be around the team to train and participate in on-ice training, and hopefully return to play.”
More from TheLeafsNation.com: