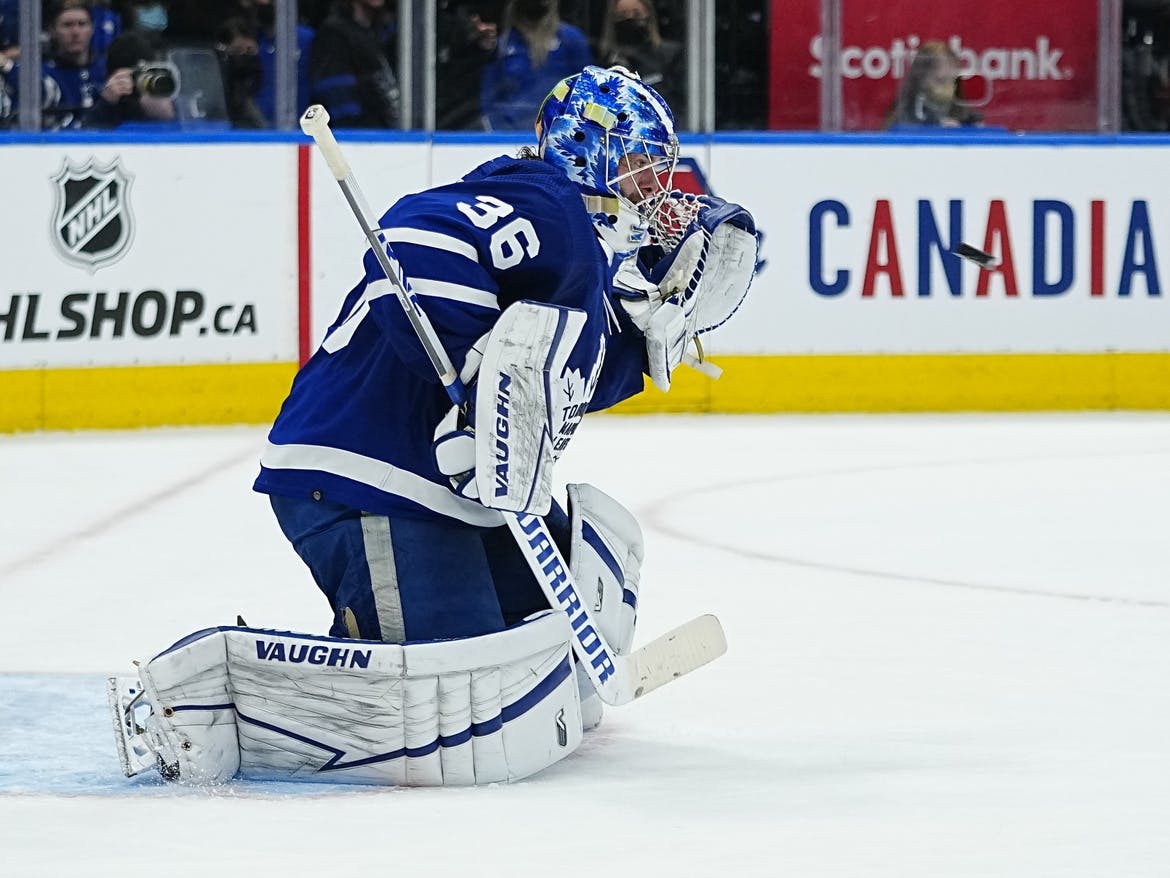 By Mark Norman
6 months ago
Leafs Nation has been going back and forth over the last few weeks about the pros and cons of playing the Tampa Bay Lightning or Boston Bruins in the first round of the NHL playoffs, but the one area where you could say the Lightning look scarier than the Bruins, even if the numbers from this season don’t fully agree, is in between the pipes.
Now that we know the Leafs will be playing the Lightning, let’s compare their starting goaltending situation versus the Leafs.

By his exemplary standards, @Andrei Vasilevskiy had a slightly-down year in 2021-22, but one which would still be considered above average among his peers. Vasilevskiy finished the year with the eleventh-best save percentage (0.916) and sixth-best goals saved above expectation per 60 (+0.28) in all situations among goaltenders with at least 2000 minutes played.
Most goaltenders would trade their soul for these numbers, but they were actually down from his 0.924 save percentage and +0.31 GSAx/60 last season: results which garnered him second place in Vezina Trophy voting. Vasilevskiy followed up his formidable regular season campaign in 2020-21 by posting an insane 0.937 save percentage in the playoffs, guiding the Lightning to their second-straight Stanley Cup and earning himself the Conn Smythe trophy in the process.
Over the last five seasons, Vasilevskiy is the only goaltender with 200+ regular-season games and 50+ playoff games to his credit. Over this timeframe, he leads all goaltenders (min 200 games) in regular-season save percentage (0.920) and is second only to @Carey Price in playoff save percentage (min 30 games), with a 0.925 to Price’s 0.928. There should be no controversy over the statement that Vasilevskiy has been the best goaltender on the planet over the last five seasons.

@Jack Campbell had a rollercoaster year, to say the least. A hot first two months had Leafs fans clamouring for GM Kyle Dubas to sign Campbell to an extension before he became too expensive, and he was being mentioned as a potential selection for the U.S. Olympic team.
On December 31st, Campbell was rocking a save percentage of 0.937 with 12.9 goals saved above expectation, figures which placed him top-three in both metrics. By the end of the season, those numbers had plummeted to 0.913 and -8.2. Campbell’s calendar 2022 numbers were ghastly: a bottom-ten save percentage of 0.893 to go with a -21.1 GSAx over 26 games that ranked dead last in the league. Campbell, dealing with confidence and injury issues, looked like a shell of his former self. The Leafs, who came into the season feeling good about their goaltending situation, suddenly had a crisis on their hands, with Campbell faltering and @Petr Mrazek consistently failing to pick up the slack.
If there is one positive to take away from Campbell’s play in 2022, it’s how he ended the season on a high note. In his last four games of the season, Campbell posted a 3-0-1 record with one shutout, a 0.943 save percentage, and a +1.9 GSAx.
Speaking of postseason credentials, Campbell doesn’t have nearly the same experience as Vasilevskiy (7 GP to 81 GP), but in his brief postseason appearance last season he posted a 0.934 save percentage over seven games. You cannot take much from a sample size of games that small, but they’re still encouraging numbers.

One possible area for the Leafs and their #1-ranked powerplay to exploit is Vasilevskiy’s fairly average results while shorthanded. If the Leafs can capitalize with the man advantage they may be able to overcome Vasilevskiy’s 5v5 superiority over Campbell.
Below are two charts of how Vasilevskiy and Campbell’s seasons progressed across the two metrics we focused on most heavily in this article: save percentage and goals saved above expectation. Vasilevskiy appears to have had a much more consistent season than Campbell, who started hot then struggled from the midway point of the season onwards.

The Leafs face the daunting task this year of needing to knock off the two-time Stanley Cup champions and their Conn Smythe-winning goaltender to slay their first-round demons. It’s a tall order. Suffice to say that Jack Campbell will need to be at his absolute best to contain the Lightning’s high-octane offense and give the Leafs a chance if Playoff Vasilevskiy shows up.
More from The Leafs Nation
Uncategorized
Recent articles from Mark Norman