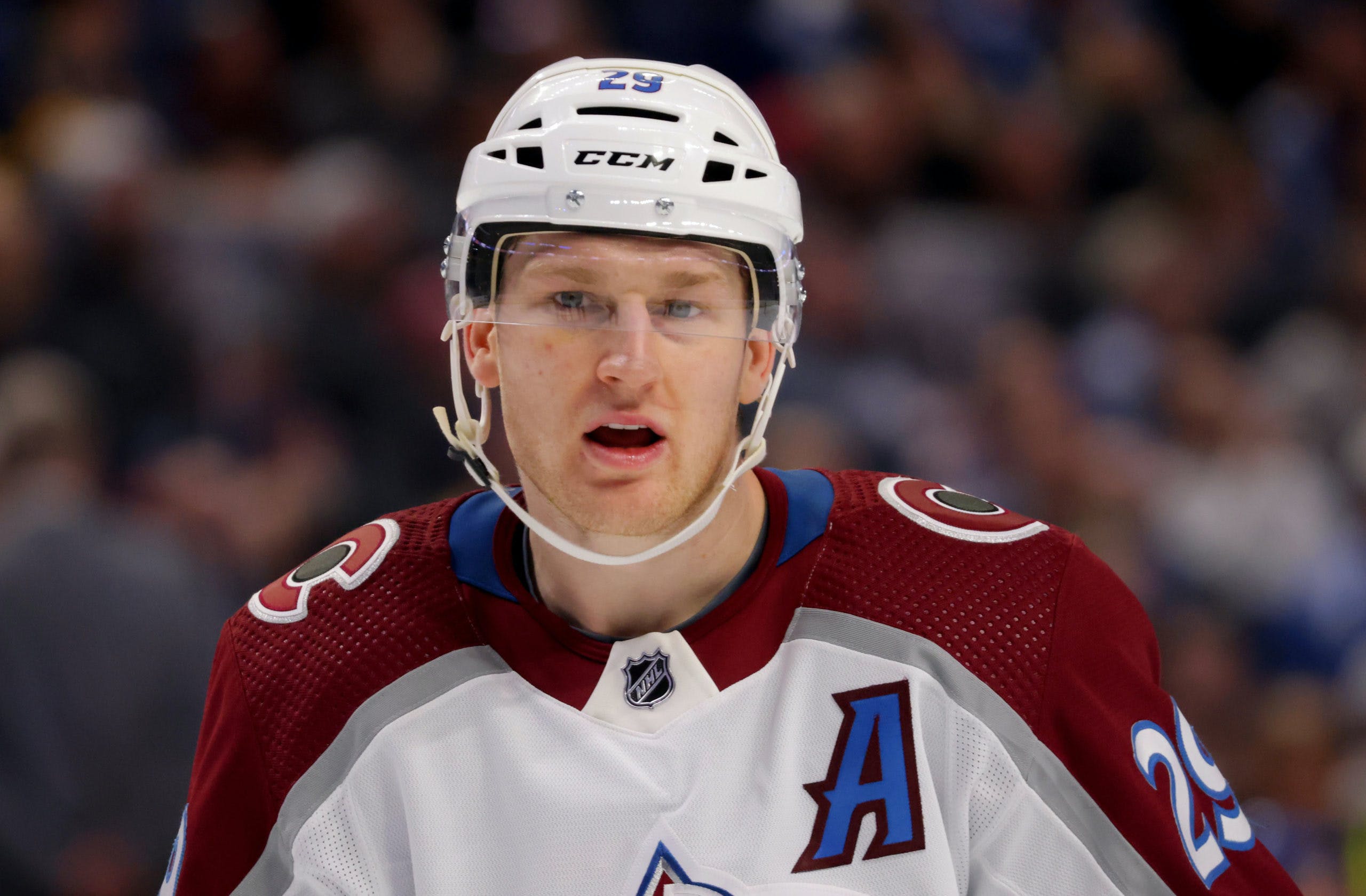 By Scott Ony
1 month ago
Over the past week the Colorado Avalanche got into more injury trouble, Shane Wright finally found the back of the net and the basement teams have fallen out of the playoffs enough to get ready to sell.
MacKinnon injured
The injury woes for the defending champion Colorado Avalanche continued Monday with Nathan MacKinnon leaving the game against the Flyers with an upper body injury. He is expected to miss roughly four weeks.
Colorado’s injured reserve already includes Valeri Nichushkin, Bowen Byram, Josh Manson, Shane Bowers, and Kurtis MacDermid. Captain Gabriel Landeskog and depth forward Darren Helm are also on the long-term IR and are yet to play this season. Evan Rodrigues is week-to-week and Jean-Luc Foudy and Arturri Lehkonen are day-to-day.
Despite their long list of injured players the Avs have managed to stay competitive and sit fourth in the Central division with a record of 13-9-1. They have lost three of their last four though and it will be a lot more difficult for them win games without Mackinnon in the lineup.
If they can manage to tread water for the next few weeks they will remain one of the favourites for the Stanley Cup but there is a serious chance they could fall several points out of the playoffs before MacKinnon returns.
Wright’s first goal
2022 fourth overall pick Shane Wright scored his first career NHL goal on Tuesday against the Montreal Canadiens. It was nice bit of revenge for Wright as most expected the Habs to select him with the first pick in the 2022 NHL entry draft.
This was Wright’s first NHL game since November 5th at Pittsburgh. He has been a healthy scratch for most the season and spent time in the AHL on a conditioning stint. The Seattle Kraken will decide on his future soon as he has played eight of the nine games allowed before burning the first year of his entry level contract.
It is expected he will be loaned to Team Canada for the upcoming World Junior Tournament. In eight NHL games he has just two points and averaging 8:29 TOI. He also added four goals in five games with the Coachella Valley Firebirds of the AHL.
Trade deadline targets
With over a quarter of the season already passed we now have a clear look at who the sellers are going to be at the trade deadline. Anaheim, Chicago, Columbus, Arizona, and San Jose should be looking to improve their chances at landing a top pick rather than trying to win games.
All these teams have players that could seriously boost a contender’s chances of going on a deep run. If the Leafs want to add a defenceman Jacob Chychrun and John Klingberg will likely be on the move. Chychrun is the better fit but will cost a lot more to acquire because of his team friendly deal. Klingberg could be worth it as a rental if the Ducks are willing to eat salary.
Erik Karlsson would look great on pretty much any contenders blue line but I’m not sure its possible with his 11.5M cap hit. Although rumours about his potential move continue to swirl.
Vancouver’s Bo Horvat looks to be the top forward likely to be dealt but the Canucks aren’t quite in selling mode just yet. It’s believed that both sides would like to get a deal done as well, it just might not be able to work because of their salary cap situation.
Other forwards teams will be calling on include San Jose’s Timo Meier, long-time Chicago Blackhawks Patrick Kane and Jonathan Toews and Gustav Nyquist of the Blue Jackets.
Meier is the most valuable of these four but it’s unknown if the Sharks are willing to move on from him. Again he isn’t a fit for the Leafs as he will need a huge deal this summer. Kane or Toews are interesting possibilities for Toronto if they are willing to waive their no-trade clauses. They would likely just be rentals though.
News
Recent articles from Scott Ony