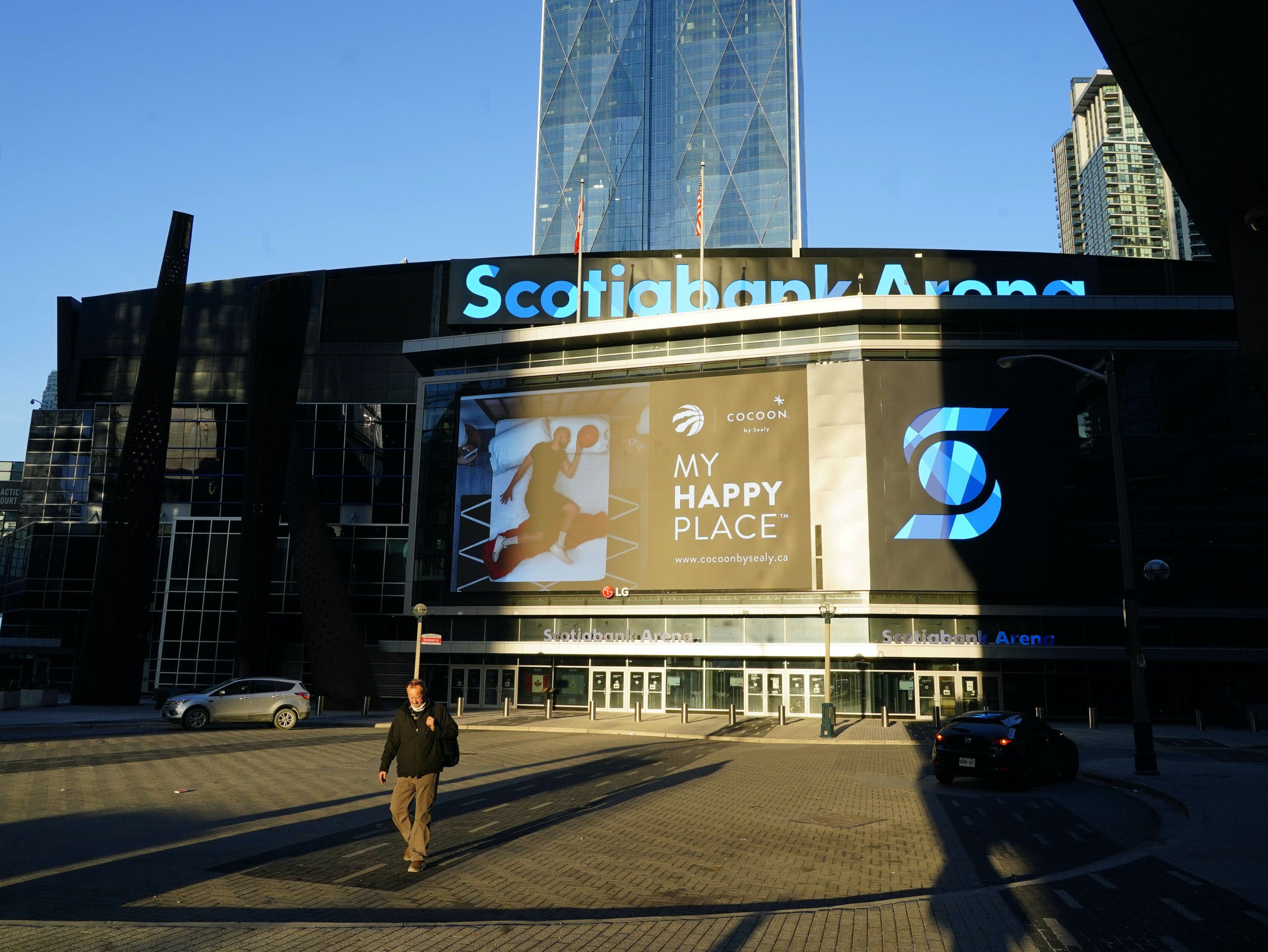 By Jon Steitzer
1 year ago
It’s probably premature to think that Omicron related cancellations are over for the Leafs and the NHL, but at the same time it seems like it has been eerily quiet about rescheduling some of those games. Considering the Leafs will have to make up nine games (so far) and the league needs to deal with 98 games total, it seems quite wishful that the NHL will be able either fit all of the games into what was going to be the Olympic break and that they will not upset the broadcasters and ticketholders by waiting until the last minute to announce those revisions. It’s because of that, you’d hope to see the rescheduled dates, soon, but with the acknowledgement that it will be a logistical nightmare to pull it off.
Amazingly during the Olympic break, there are only two nights that the Raptors are playing home games and the Scotiabank Arena wouldn’t be available to the Leafs for that reason. Beyond that there are only a couple of concerts still scheduled for that time frame as well, so in theory the Leafs 4 home games that will need to be made up can easily be rescheduled if it also works for the Hurricanes, Devils, Blues, and Penguins.
Of the opponents the Leafs had games postponed with, the Blues, Devils and Pens would be on the easier side of rescheduling.
St. Louis looks like one of the teams that will have the closest thing resembling some time off during the Olympic break, and the five games for the Penguins and Devils should be easy to address as well. One of the nice advantages for the Leafs is that none of the teams share a building with a NBA club, and while things like NLL teams, trade shows, etc. can still occupy a building, there is a good chance that the NHL can exert whatever sway it actually has in getting the games played primarily in February.
Still that’s a pretty intense workload, unless they’ll give teams some breathing room by axing the All-Star game. Given that the NHL is still actively promoting the All-Star game, it doesn’t look like we’ll be so fortunate, and they’ll intend to play it, potentially adding to the workload for Matthews, and potentially players like Campbell, Nylander, Tavares and Rielly as well.
Looking outside the February scheduling window, there are only two sections in the schedule where the Leafs can add a couple of games without making it a back to back. January 24th in between a road game against the Islanders and a home game against the Ducks (which would be an ideal time for the Leafs, but a busy time around the league and likely force a back to back for one of the Leafs other potential opponents).
The other option is March 21st, the trade deadline, and looking at the list of potential Leafs opponents, it would be a good fit for the Kraken, and no one else. Perhaps the reality is that there won’t be a shortage of back to backs in the mix for teams like the Leafs or others that have a high volume of games that need to be made up in the final three months of the season.

So really what does all of this mean for the Leafs?

Well, I’d suspect today’s postponement of the home game against New Jersey should probably be the last one for the Leafs if they intend to make up all the games before the scheduled end of the season on April 29th. The Leafs will end January at the 41 game mark, the halfway point of the season, and that means a lot of hockey in three months. Amazingly it still works out to be a fairly even split of home and away, with 22 remaining home dates and 19 games on the road in the back half.
The Leafs do find themselves in a situation where they are comfortably in the top three in their division, and while the heavy schedule compared to Tampa or Florida might bite them, teams chasing the Leafs like Boston have an equally heavy workload from here on out, and at worst we can look at the 8 teams sitting in playoff spots in the Eastern Conference today as the likely playoff teams in May.
The other thing that is important to note is that while it will be nice to lean into Jack Campbell and give him his starts in January, the rest of the way the Leafs will be happy they have Petr Mrazek to lean on. Perhaps people like me should shut up about the idea of trading Mrazek because he is going to earn his keep the rest of the way.
In fact, health and depth will be an interesting thing for the Leafs and as much as they can keep the band together until the trade deadline, that might be the best course of action, as the Leafs are going to need bodies more than upgrades until the last minute.
COVID certainly has presented new challenges, but the NHL has bent over backwards to give the Leafs their maximized number of home games in front of a full arena. While this has been nice for ticketholders, this is far more likely a revenue sharing based decision, but at least one that benefits fans. With only one home game presently on the books between now and February 24th, the league has further options load up the Leafs February schedule with road games and give them a few more home dates later in the season. That’s where you might find a bit more a benefit, and one that could help in the battle for first in the Atlantic.
Right now, we still know nothing, but something will have to give soon as hosting a NHL game isn’t something arenas are going to be able to do without at least a couple of weeks advance notice.
Uncategorized
Recent articles from Jon Steitzer