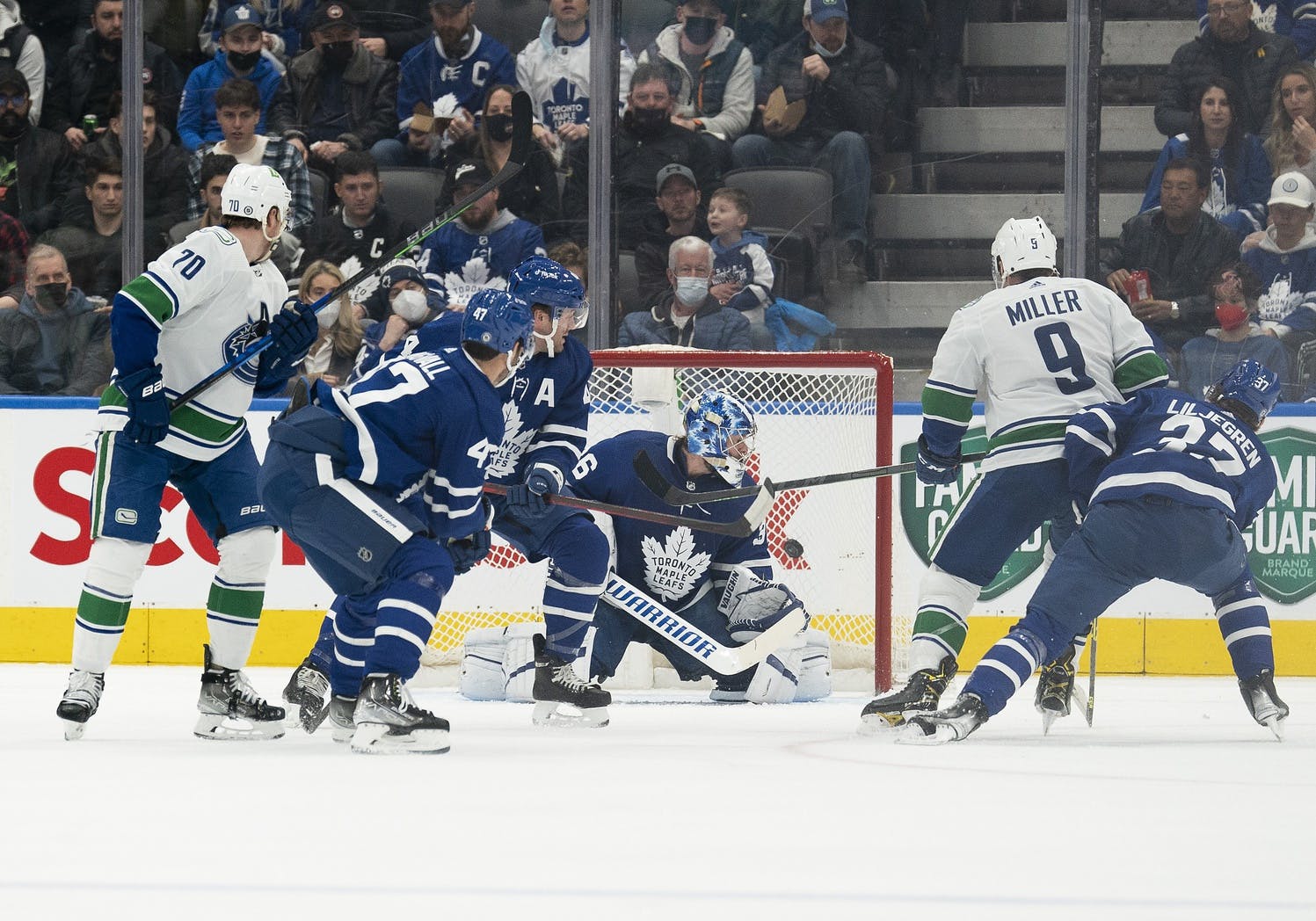 Photo credit:Nick Turchiaro-USA TODAY Sports
11 months ago
COLUMBUS, OH — Sometimes it’s not as simple as getting better goaltending, but rather, clearing the traffic in front of your own net.
That was the message from Toronto Maple Leafs head coach Sheldon Keefe as the team held practise on Sunday following a 6-4 loss to the Vancouver Canucks.
“We’ve still been giving up those tips and making life harder on our goalies,” Keefe said of his team’s play as of late. “Our job, as a team, is to make life easier on the goalies.”
In what was Jack Campbell’s return in goal after a week since his previous start, the team’s incumbent No. 1 goaltender allowed five goals on 28 shots on Saturday. Three of those goals came off deflections in front of the net, while the other two beat him clean.
That led Campbell to insist that he would pull himself out of his recent struggles. And left Keefe changing the focus on what he can control, and that’s the play in front of the net.
Easier said than done.
Over the past month, Toronto found themselves giving up high-quality scoring chances to the opposition. The trend started in losses on the road against the Calgary Flames and Canucks despite tallying over 100 shots combined in those two contests. They ran into similar issues against the St. Louis Blues and most recently, the Montreal Canadiens, who defeated the Maple Leafs 5-2 on Feb. 21.
In that time, Campbell and Petr Mrazek haven’t been able to provide the goaltending needed to yield better results. The Leafs have gone 3-4-1 in their last eight games. One of those victories came in a 10-7 result against the Detroit Red Wings, where Campbell had to be pulled in a winning situation after allowing five goals on 25 shots.
To the team’s credit, the Leafs have had better underlying numbers defensively since those struggles last month. The Grade-A chances have been fewer, but the goaltending hasn’t been there to support it.
So what can be done?
On Saturday, the Leafs lost some battles in front of the net to the Canucks. Keefe mentioned after the game that the team misses Jake Muzzin’s ability to block shots and clear pucks out of harm’s way.
With Muzzin out on long-term injured reserve with a concussion, Keefe has moved TJ Brodie from the right side of the top pair with Morgan Rielly to the left side of the second pair with Justin Holl. Rasmus Sandin and Timothy Liljegren have not performed well on the right side of Rielly in tryouts over the last few games.
So maybe it’s time for newcomer Ilya Lyubushkin, a right-shot defenceman to get a look?
“We have a spot with Rielly available, but Morgan plays in a lot of offensive situations,” Keefe said. “With the way the puck moves and those kinds of things, it is important to have a guy there that pairs well with that and doesn’t disrupt our offence.
“We want to see [Lyubushkin] improve in some areas of his game, especially with the puck. He is absolutely putting the work in to make those improvements.”
Lyubushkin registered a Corsi possession rating of 67 per cent against the Canucks on Saturday, the highest of any Leafs defenceman. Although it came in a third-pair role, there aren’t a lot of options for the Leafs to try, other than putting Brodie back on the right side with Rielly.
Of course, no configuration will be optimal if the team can’t get a save.
Mrazek will get the nod against the Blue Jackets on Monday.
“To be honest, I like where my game’s getting,” said Mrazek, “I just have to improve those small details, do them right, and I’m not worried about my game at all.”
Robertson gets a look on the power play
After scoring his first NHL regular-season goal on Saturday, Nick Robertson will remain on the team’s second line with John Tavares and William Nylander.
After displaying his shooting ability against the Canucks, Robertson will get a chance to help the team’s power play as he’ll skate on the second unit when the team visits the Columbus Blue Jackets on Monday.
“He shoots it probably as hard as anybody here,” Auston Matthews said of Robertson. “He’s got a really good release and he puts everything into it every time he shoots.”
Ondrej Kase will miss his fourth consecutive game with an upper-body injury and the four forward lines will look the same as they did on Saturday. That means Alex Kerfoot will once again find himself on the fourth line.
“Frankly, Kerf deserves to play more than he did last night and deserves to play higher in the lineup,” Keefe said. “It is just that circumstances being what they are, I have made the decision to give Nick Robertson a better opportunity. Last night, he did well.”
Kase will skate in Toronto while the team prepares for Columbus.
Rasmus Sandin will miss his second straight game with an illness.
News