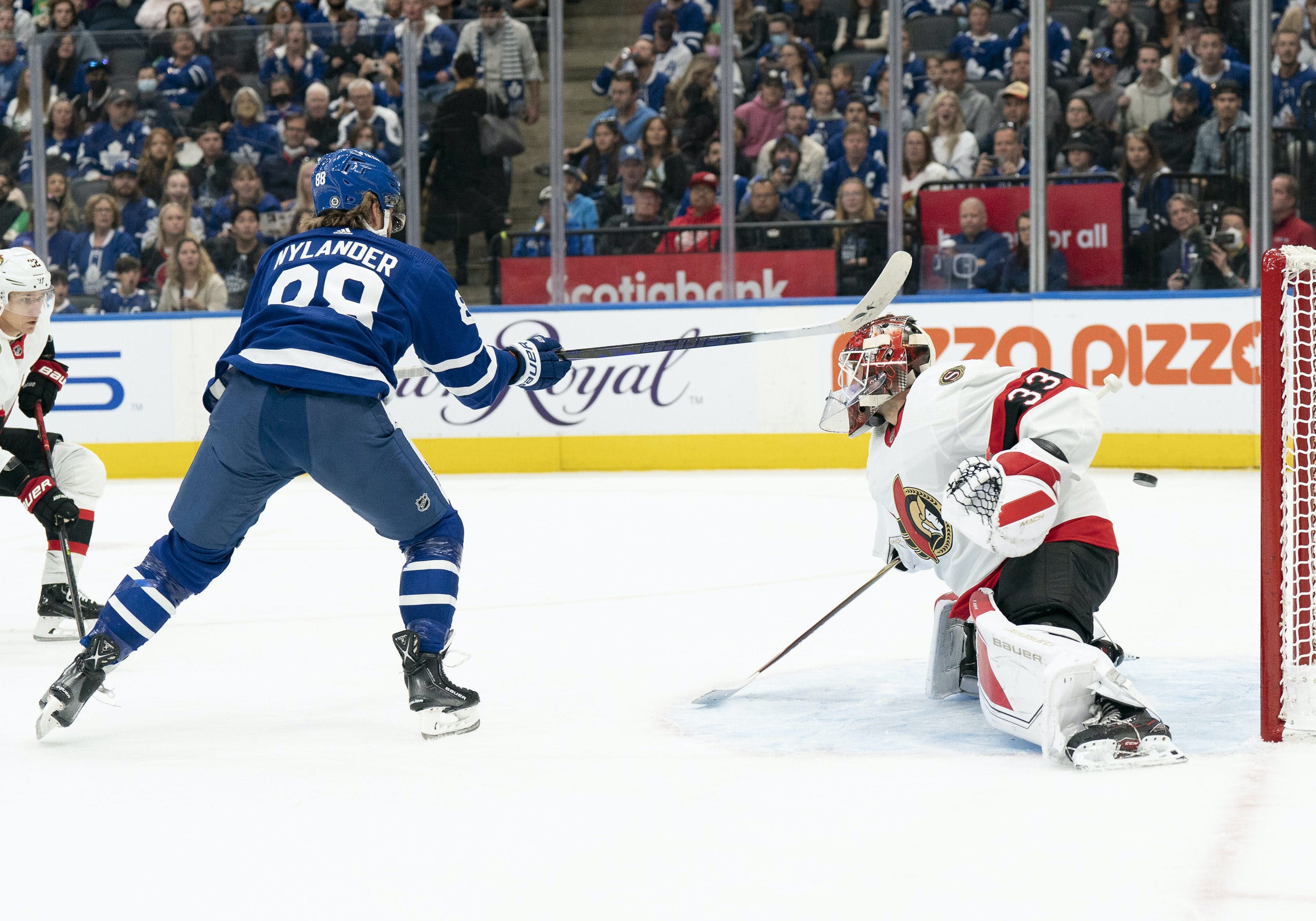 By Joseph Zita
4 months ago
The preseason is finally here and the Toronto Maple Leafs played two games today in a doubleheader against their provincial rival, the Ottawa Senators. After what was yet another disappointing and annoying outcome in the playoffs – this time against the Tampa Bay Lightning – the Maple Leafs get to focus on a fresh start to a brand new preseason and regular season.
Game one for both teams started at 1:00 pm ET with the second half of the doubleheader starting at 7:00 pm ET.

Ottawa and Toronto came into game one of the doubleheader with a lot of new faces to fans and a lot of unfamiliar names to some fans too. Albeit it is the preseason after all. Anyways, let’s talk about game one of the preseason for both teams.
The game started pretty sloppy for both sides but that’s a given because it’s game one of the preseason and training camps just opened up a couple of days ago. However, Tim Stutzle and the Senators opened up the scoring about midway through the first with a partial breakaway goal that beat Erik Kallgren after a pinch by Justin Holl with no support took place. In the second period, Toronto found their footing and it was all them for the remainder of the game. Justin Holl, Denis Malgin and Alex Steeves all scored goals in a span of 2:14 which is Maple Leafs hockey if I’ve ever seen it. Heading into the third frame up 3-1, Toronto and Ottawa exchanged scoring chances but no one scored until Alex Steeves buried his second of the night into the empty net to secure the 4-1 win for the Maple Leafs in game one of the split-squad doubleheader.
There were a handful of things that went right for the Maple Leafs in game one, and the biggest thing was probably the second line of William Nylander, Pontus Holmberg, and Denis Malgin who were just all over the puck all game long. Whether it was Nylander doing Nylander things like neutral zone takeaways and skating into the offensive zone for a scoring chance or deking around half the team from his end to the opponent’s goalie, Nylander was on his game and it looks like he’s ready for the season to start already.
For Denis Malgin and Pontus Holmberg, they complimented each other and Nylander very well in my opinion. We saw Nylander set up Malgin for a cross-crease goal to put them up 2-1 and although they only scored one goal as a line today, they all had numerous chances that could’ve gone in.
Now I don’t want to say nothing went wrong for the Maple Leafs in game one, but I truly don’t think anything went wrong for them in game one except slopiness in the first period and that they went 0-3 on the power-play, but as I said early, that’s a given because training camps just opened up and this was game one of the preseason for both teams.
I already said that the Nylander-Holmberg-Malgin line was by far not only Toronto’s best line this game, but they were the best line on the ice between both teams and it wasn’t close. However, there were some other notable stand-out players on the Maple Leafs in this game in my opinion. For starters, recently signed to a PTO, Zach Aston-Reese was noticeable for the right things in this game. Finishing his hits, forechecking, and battling for the puck in corners is what he does well and is what he did today for Toronto.
I also liked what I saw from the 2022 draftee, Fraser Minten. Listed at 6’1 and 185 lbs, I think it’s safe to say Minten looks bigger than that on the ice, or at least to me he did. He showed a lot of great things today, including his defensive awareness by breaking up passes and backchecking to stop a scoring chance for Ottawa. Not only that, I liked that he was using his body to win puck battles as well.

After what was a pretty dominant 4-1 win for the Maple Leafs in game one, these two teams met for the second half of the split-squad doubleheader at 7:00 pm ET.
Unlike game one, game two started a little less sloppy for both teams, especially for the Maple Leafs, as they created some scoring chances early on, but Forsberg shut the door. There wasn’t anything too special in the first period other than some scoring chances and a power-play for the Senators but they both entered the second period scoreless. Early in the second period, the Maple Leafs got on the board as the first line delivered with a snipe from newly signed Calle Jarnkrok as he picked the top corner from a pass by Matthews. Just a bit after midway through the frame, Jarnkrok doubles down and scores again from around the same spot on the ice to put Toronto up 2-0. Maple Leafs had part of a four-minute power-play to open up the third period but were unable to score on the man advantage and eventually after the Senators killed it off, they find the back of the net with around 15 minutes to go. From then on it was kind of all Ottawa to some degree as they scored two quick goals towards the last seven-ish minutes of the frame and picked up a 4-2 win to split the doubleheader.
A lot of things went well for the Maple Leafs in tonight’s game. For starters, they got solid goaltending from Ilya Samsonov who faced 16 shots in the two periods he was in the net for and turned them all aside. They also played Maple Leaf hockey for a good chunk of the game, and what I mean by that is they control the game and dominate with possession. You saw plenty of times they would cycle the puck in the offensive zone or if they had the puck in their zone and try to break it out into the neutral zone and if they didn’t see something they liked, they’d circle back into their zone and try it again instead of dumping it and either getting off the ice or go in for a 50/50 puck battle. However, in the third period, I felt like they kind of got away from their game a little bit which allowed Ottawa to come back and win this thing.
Their power-play laid a fat goose egg through both games and yes it’s understandable given it’s day one of preseason hockey and it was split-squads so not everyone is going to be on the same units, but not scoring a goal on the man advantage wasn’t good. Other than a poor power-play (0-4) in not just game two, but game one as well (0-3), and allowing the Senators to score four straight goals in the third period to ultimately win, there weren’t a lot of things that were bad from the Maple Leafs side of things. I don’t want to focus on Petruzzelli and say he was the reason they lost, but he did allow some pretty weak goals on some poor positioning that benefited Ottawa.
A lot of players looked good tonight for Toronto, but some players in particular that caught my eye were Calle Jarnkrok (for obvious reasons), Auston Matthews, Michael Bunting, Nicolas Aube-Kubel, and Ilya Samsonov. The first line for the Maple Leafs did all the scoring tonight for them with Jarnkrok scoring two and Bunting (2) and Matthews (1) getting some assists.
For Aube-Kubel, I liked his energy. He had a couple of big hits that caught my eye including one on Norris along the boards, and that’s exactly the type of player you’re getting with him. A high-energy player who isn’t afraid to throw the body and someone who forechecks hard to get pucks for his linemates. And Samsonov, as I said earlier, faced 16 shots and stopped all of them. He was positioned very well all night and didn’t look like he was struggling to track pucks to try and save them and that’s a very good sign.
The Maple Leafs are back in action Wednesday night at home when they welcome the Montreal Canadiens into town. You can catch the game on Sportsnet One for a 7:00 pm ET puck drop.
News
Uncategorized
Recent articles from Joseph Zita