Maple Leafs changed a few narratives in their Game 5 win against Tampa, now they have to change the one that matters the most 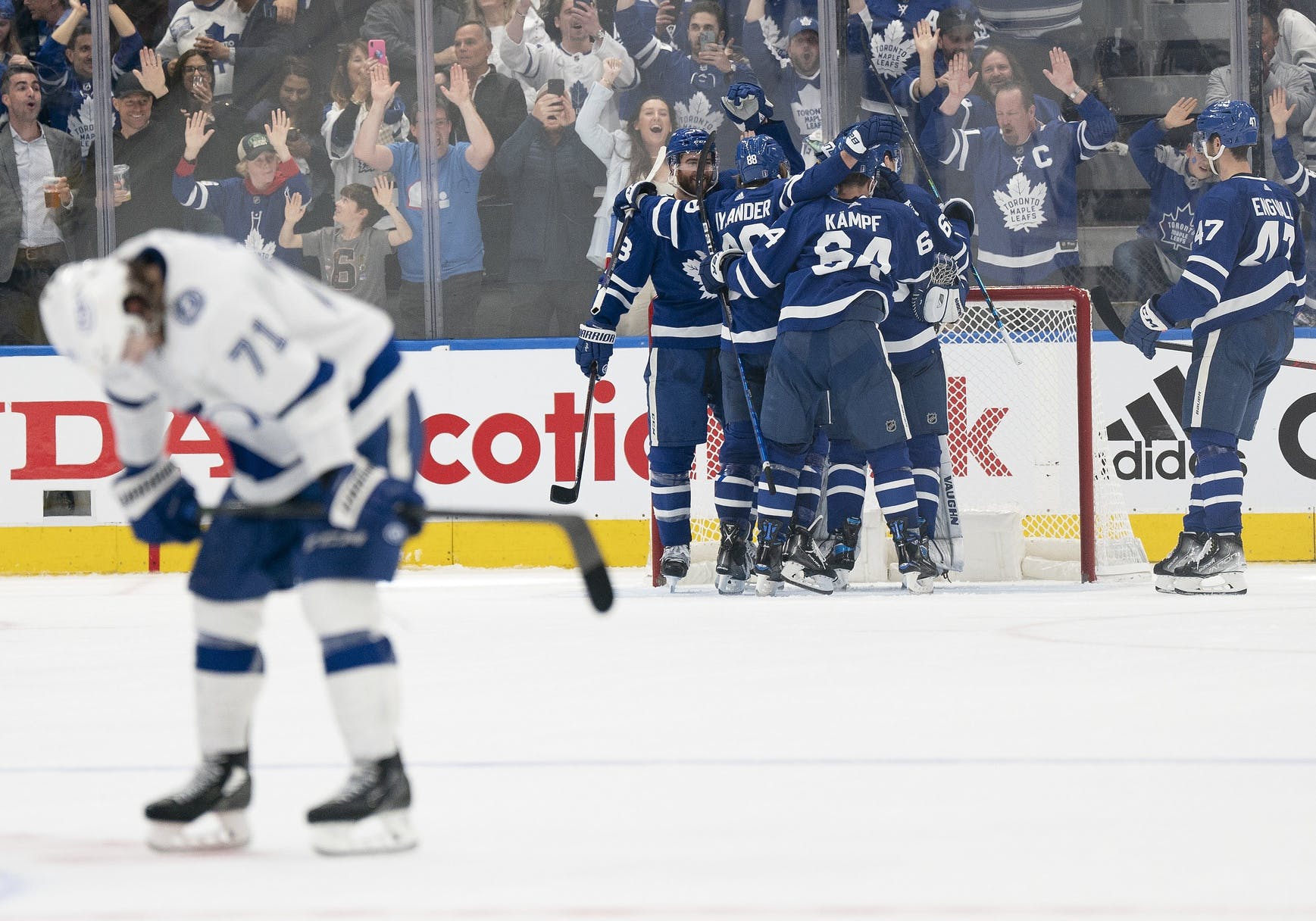 Photo credit:Nick Turchiaro-USA TODAY Sports
6 months ago
It was looking like it was going to be another one of those nights. If you are a frequent reader of this site, you know the feeling.
The Toronto Maple Leafs allowed two goals on the first four shots of the game, but erased that deficit with tallies from John Tavares, Morgan Rielly, William Nylander and Auston Matthews as they defeated the Tampa Bay Lightning 4-3 take a 3-2 series lead in their first-round series.
Through the first four games between these clubs, the team that scored first had gone on to win each game. There were also no lead changes in any of those games.
So when the Lightning scored a pair of early goals from Steven Stamkos and Victor Hedman, things looked pretty grim for Toronto.
They went into the intermission down 2-0 and were badly outplayed in the first 20 minutes. They were outshot 14–4 and Tampa had a 78 percent of the 5-on-5 score-and-venue adjusted expected goals share of 78 percent per NaturalStatTrick.com.
That’s when Jason Spezza took it upon himself to deliver a speech to players in the dressing room to help lift his team’s spirit.
“More along the words that it wasn’t good enough,” Nylander paraphrased of Spezza’s message. “We just need to get going and battling and skating.”
It wasn’t the first time leader had some words for his teammates in Game 5.
After Jack Campbell allowed those first two goals, Spezza skated over to his goaltender during the TV timeout to given the goaltender a pep talk.
Evidently the words helped Campbell, as the goaltender went on to stop 30 of the next 31 shots.
All of this after he was pulled in Game 4 after a length discussion with head coach Sheldon Keefe.
“To me, he just looked like a veteran goalie,” Maple Leafs head coach Sheldon Keefe said of Campbell.
There many points in the second period where the ice began to tilt in Toronto’s favour, but Campbell helped stop the the damage when he made a save off Nikita Kucherov in the opening couple of minutes after the Lightning forward stick-handled past Morgan Rielly.
Shortly after that play, the Lightning were called for their second too-many-men penalty of the game and the Leafs took advantage with John Tavares’ first goal of the playoffs.
In the third period, Tavares picked up the primary assist on Rielly’s goal that tied the game 2-2.
The veteran had been scrutinized for his lack of production in the playoffs, but the Leafs captain was undeterred and came up with a pair of moments his team needed against the two-time, defending Stanley Cup champs.
”I’m not going to cut corners and cheat for offence, I understand the game that I need to play and it being a long series and just staying with it,” Tavares said of his game. “I would have liked maybe some better looks in some other games but I still felt good about certain things and some habits.”
His teammates also backed his play.
”Stuff hasn’t for him but I’m sure it will,” Mitch Marner said earlier that morning.
William Nylander followed Rielly’s goal less than a minute later when he received Ilya Mikheyev’s pass and fired as shot off the post and past Tampa goaltender Andrei Vasilevskiy.
That represented the first time the lead had changed in this series.
And after Tampa pushed back with an equalizer from Ryan McDonagh, Matthews replied with the game-winner when he picked up a forced rebound from Mitch Marner and beat Vasilevskiy for the 4-3 lead.
“I try to anticipate it’s coming to me, because he can find ways that not a lot of people can to get me the puck,” Matthews said of Marner. “Just an unbelievable IQ play by him.”
In many ways, this was a game that had summarized Toronto’s season to this point.
Going into the series, Keefe had mentioned that going through some early adversity through the first seven games of the season could helped carve out a framework of how to get past difficult moments.
Like the game tonight, The Maple Leafs found themselves down 2-0 in the first intermission back on Oct. 25 in a game against the Chicago Blackhawks.
They were 2-4-1 to start the season and 40 minutes away of falling deeper into a slide.
Like the game tonight, a first intermission speech helped turn the tide.
During that same TV timeout where Spezza talked to Campbell on Tuesday, Keefe grabbed the group for a pep talk to remind them of what getting scored on has done to a team through the first four games of this series.
”This snowballs, we’ve got to stop,” Keefe said. “If we’re going to come back and we’re going to flip the script and change this, we’ve got to stop it.”
On this night, they twice erased leads twice and found a way to give themselves an opportunity on Thursday to advance past the first round for the first time since 2004.
The Leafs changed the Tavares production narrative on Tuesday. They also changed the narrative in the series about a lack of lead changes by battling back.
Now they have to change the narrative that matters the most.
”I don’t think tonight is going to matter if we don’t take the next step, the hardest step,” Keefe said.  “I certainly believe in the event that we are able to get this done, we absolutely will be able to look back on tonight as a huge moment for our team. But we can’t live in this moment.
“This moment is now done. And we take the experience and we take a look at what we’ve learned and the confidence you pull out of it and the excitement you have going forward. But you’ve got to know what’s ahead. You know it’s going to be the hardest one. So we’ve got to focus on the next one.”
More from TheLeafsNation.com
POINTSBET IS LIVE IN ONTARIO