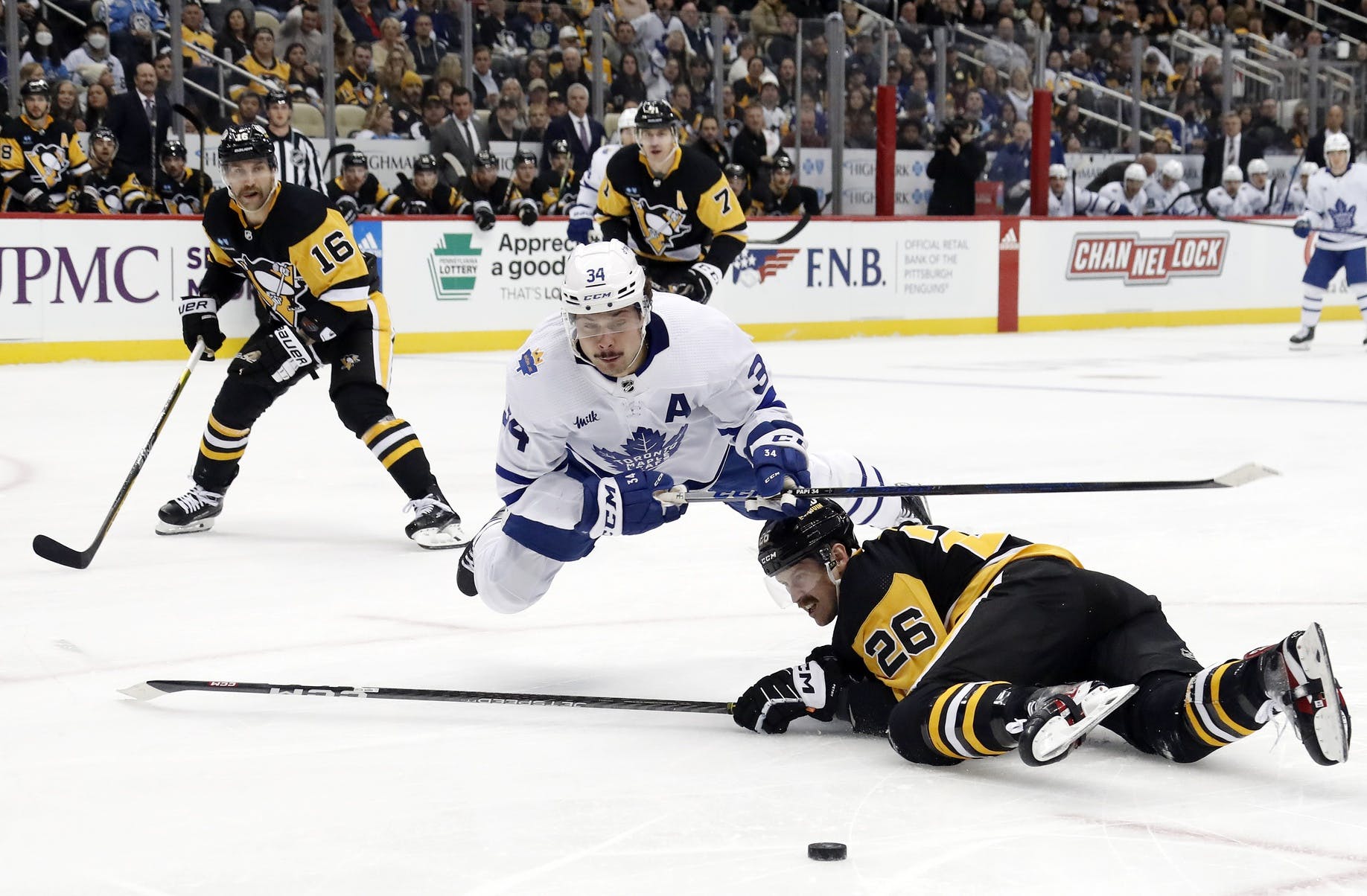 By Ryan Hobart
2 months ago
It feels like games against the Penguins are always slightly cursed, but this one worked out pretty well. The Leafs kept the pressure on the Penguins, earning a 4-1 win.
From that first early goal on, the Leafs were healthily in charge of this game. Here are some thoughts on the game.
Behind The Net
No, not the ancient, now defunct stats website. This is to do with the success Toronto had tonight forcing the Penguins defenders to face the wrong way. Twice they capitalized with a pass behind them that scored on Casey DeSmith. First on goal #2 by Pontus Holmberg, and again on goal #3 by William Nylander:
Källgren performance
The Swedish 3rd string goalie has been filling in with the Leafs a lot this season, with injuries to both Matt Murray and Ilya Samsonov. It’s not often that the 3rd stringer has the most starts, 2 months into the season, but with his 9th start for the Maple Leafs tonight, Källgren has that strange honour.
The netminder has only had 2 “quality starts”, plus a third excellent performance in relief against Boston; the remainder have been well below average. This 1-goal-against performance Pittsburgh is definitely a boon to his season stats. He did only face [SHOTS HOW MANY???] in this one, but this is an undeniable success.
No defenders, no problem
With 3 of the Leafs’ apparent top 4 defenders out on injured reserve at the moment, it would be expected that the team would struggle defensively. And certainly, the team’s shooting stats have taken a hit in that regard. In the last 2 games, the Leafs allowed a lot more even strength shot attempts against than normal, ~63 per 60 minutes, versus ~53 per 60 minutes for the previous 20 games. That’s a small sample to be sure, though. And games against teams on a bad swing like these Pittsburgh Penguins can pad those stats.
The Leafs dominated the shots throughout this game, though, allowing less than 40 shot attempts, and having the advantage in overall shot attempts and scoring chances at about 55%.
“No problem” may be a bit of an overstatement. The Leafs have a hole to fill on the 3rd pair, which is currently occupied by rookie Mac Hollowell. The Leafs essentially rolled 5 defenders tonight, with Hollowell having the lowest ice time for the Leafs tonight. The team likely plans to slot Conor Timmins in there at some point, though it seems they’re giving Hollowell a small run first to see what they have in him. In 3 games he’s rolling with around a 43% in shot attempts control, and around 12:30 of ice time per game shows that he’s not exactly earning the coach’s trust.

The night started off really, really well, as the Leafs took advantage of a bad change by the Penguins to send Mitch Marner on the breakaway for the goal. It was his 16th straight game with a point. The Leafs’ franchise record is at 18 goals, set by Darryl Sittler in 1978, then again by Eddie Olczyk in 1990.

The Leafs are off tomorrow, and will visit division “rival” Red Wings in Detroit. It will be great to see if Matt Murray can continue his run as an excellent starter for Toronto, in this rebound year for him after escaping a career with the Ottawa Senators.
Also on the docket: when do we get to see Conor Timmins? Perhaps next game. After the limited performance by Hollowell tonight, it would be very surprising to me if the Leafs don’t go that direction for this Detroit game.
News
Recent articles from Ryan Hobart