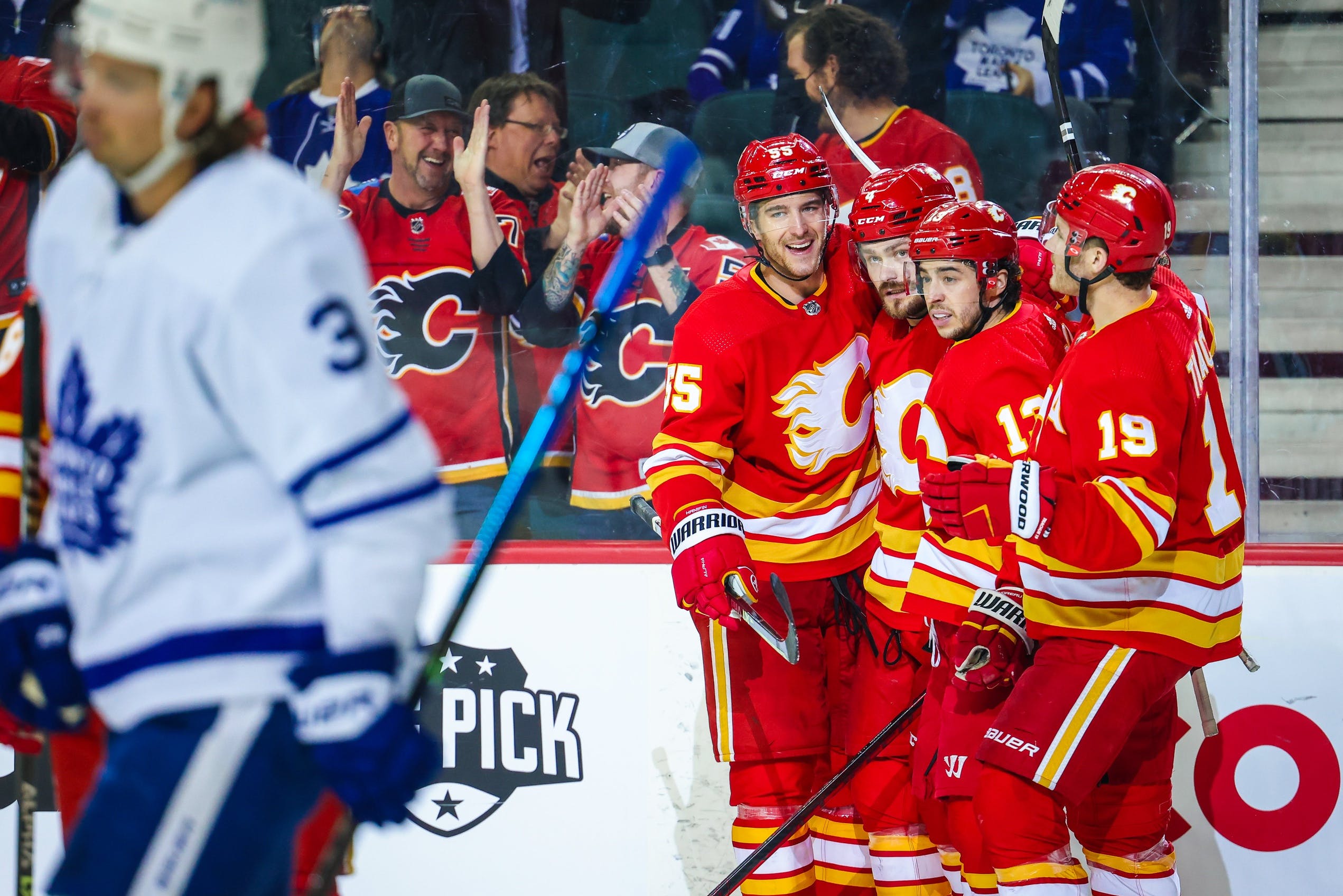 Photo credit:Sergei Belski-USA TODAY Sports
9 months ago
CALGARY — The Toronto Maple Leafs played the game they wanted to play. They fired 48 shots on goal at the Calgary Flames on Thursday night and controlled the pace of play for most of the game.
Except there was that small stretch in the second period where some errors flipped the script.
After a scoreless opening period, Rasmus Sandin’s scored his second goal of the season and gave Toronto a 1-0 lead. But Andrew Mangiapane scored just 24 seconds after Sandin to tie it up 1-1 and the Flames scored another three goals in a span of 2:51 on their way to defeat the Maple Leafs 5-2.
“We let up for a bit there and we made mistakes, big mistakes,” Maple Leafs head coach Sheldon Keefe said of the Calgary goals. “We made mistakes at a time when we were playing a really good game.”
There was the mistake on a backcheck where nobody on the ice took the trailing Mangiapane.
There was the mistake off the lost faceoff by Toronto that led to a defenceman-to-defenceman across-the-crease goal by Noah Hanifan.
There was a hooking penalty by Nylander that Keefe characterized as “lazy” that led to Oliver Kylington’s power-play goal that made it 3-1 and a breakdown in neutral-zone play that led to Elias Lindholm’s goal that made it 4-1.
The Leafs didn’t have the firepower power to overcome those mistakes like they have in previous games. Michael Bunting scored the other Toronto goal in the third period. Mitch Marner saw his career-high goal-scoring streaking come to a halt at eight games.
And it wasn’t for a lack of trying. He had a game-high 10 shots with seven of them coming in the first period.
Jakob Markstrom was strong in net for the Flames and this was from a goaltender who played both games of a back-to-back. He made 46 saves for the win.
Already down to 11 forwards with Wayne Simmonds at home to celebrate the birth of his second child, the Leafs went down to 10 forwards in the first period when the club lost  Ondrej Kase for the remainder of the game. The Czech forward was on the receiving end of an open-ice hit by Calgary’s Nikita Zadorov.
“I didn’t like it, I thought his hands came up high,” Tavares said of the hit. “I didn’t see any replay of it but I thought his hands finished up high and caught him there. You don’t want to see anyone get hit in the head, I think that’s what we’re trying to eliminate.”
The speedy winger has had a productive season for the Maple Leafs but there was definitely some concern for the player who has been riddled with head injuries throughout his career.
Shortly after the hit, Morgan Rielly immediately went after Zadorov to step up for his fallen teammate.
“It seemed like he was doing ok from some of the word around the group,” Keefe said of Kase. “But I haven’t talked to him myself, nor have I talked to our doctors. You just hope he’s going to be alright.”
Jack Campbell
A rough game for Campbell who had a couple of goals slip by him where it was “me versus the shooter” in his own words.
After rediscovering his game against the New Jersey Devils earlier in the month, this wasn’t the type of night that excuses confidence. But he seemed composed about the game when speaking to the media afterwards, much different than he has been following tough nights.
Jake Muzzin
He logged 19:21 of ice time and was a -2 in his first game in a month. Keefe said he needs to look back on the tape to evaluate his performance but liked his contribution to the penalty kill, particularly when the Leafs were shorthanded four times in the first period.
Uncategorized