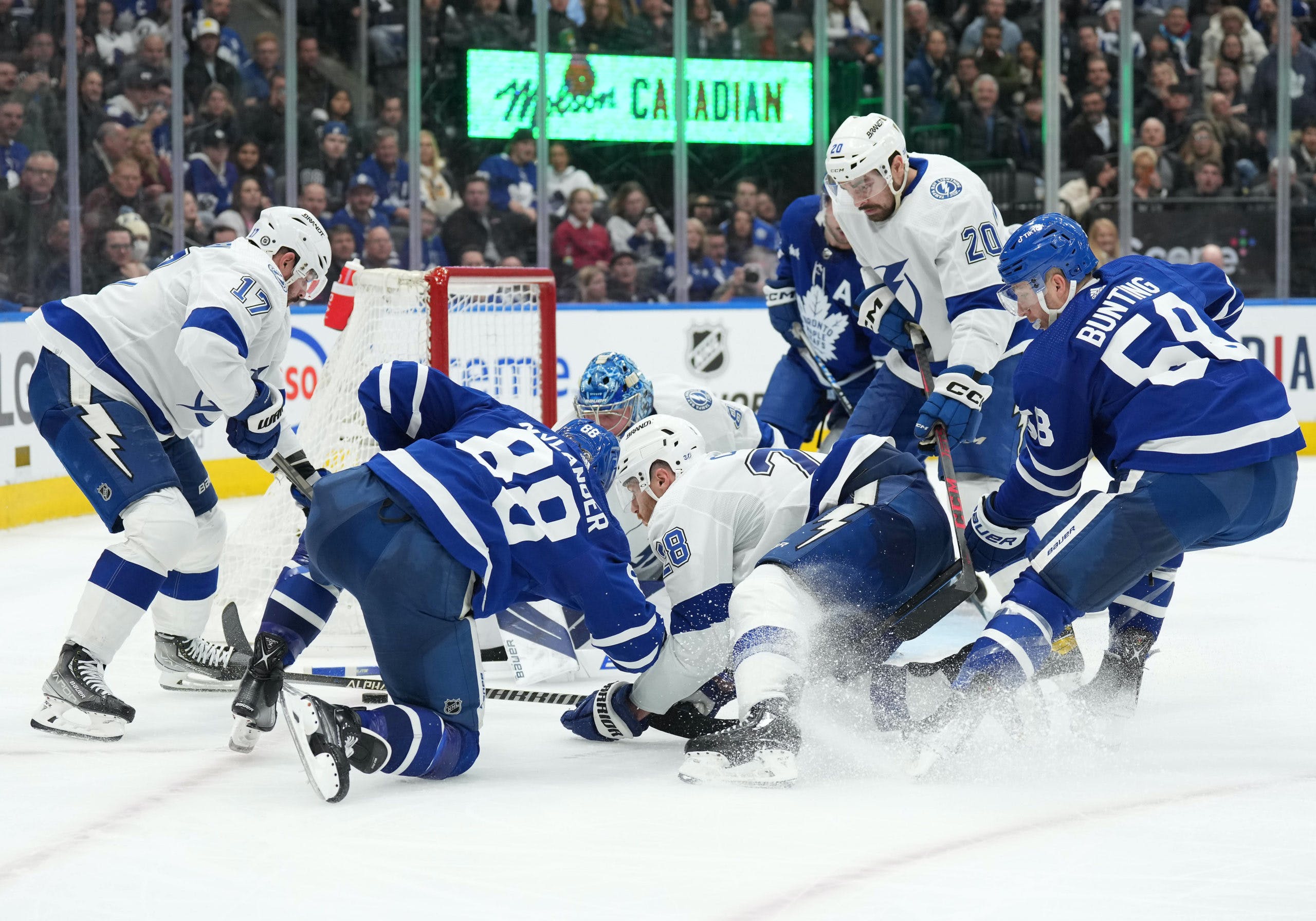 By Nick Barden
1 month ago
The Maple Leafs tried something different on Tuesday night, and although they didn’t score, their five-forward power play unit looked very effective.
Throughout the last week or so, Maple Leafs head coach Sheldon Keefe, and power play guru Spencer Carbery have been testing out a new-look unit that includes Michael Bunting, Auston Matthews, Mitch Marner, William Nylander, and John Tavares.
There was a lot of excitement around it and finally, on Tuesday, the Maple Leafs got the chance to use it against the Tampa Bay Lightning.
Toronto had a man advantage early in the second period because of late first period shenanigans, but couldn’t use their new tactic due to Bunting being in the box. So, the Maple Leafs brought out their usual suspects, plus Rasmus Sandin, and the team ended up scoring.
A few minutes after Matthews was able to find the back of the net, Nikita Kucherov checked Bunting into the boards from behind, which gave Toronto another power play. Because of that, Keefe threw out the five-forward unit, and it didn’t disappoint.
This is how the five-forward power play was deployed, if you didn’t catch it on the broadcast on Tuesday night:
———- Tavares ———
Matthews-Bunting-Nylander
———- Marner ———
What I liked about this unit compared to one with a defenceman is that Toronto was already transitioning to testing Marner on defence. And since the 25-year-old played pretty good in the few situations he got, the decision to deploy him as the quarterback on the power play was a no-brainer.
Marner is one of the best playmakers in the NHL, and to me, he should’ve been quarterbacking one of the Maple Leafs’ power play units last season. It makes so much sense.
The biggest aspect of the five-forward power play that stood out to me was their puck movement. It seemed like without a point shot at the blue line, there were more chances created due to the high-level of passing that was out on the ice.
I counted seven chances for Toronto’s first power play unit during the minute and a half that they were on the ice. Matthews, Marner, and Nylander — specifically — were the players creating most of the Maple Leafs’ opportunities. It was probably some of the best puck movement I’ve seen on Toronto’s power play in a while.
One of the things I do question, though, is will they revert to the normal format once Morgan Rielly returns?
A part of me thinks it won’t go back to four forwards and a defenceman because when Rielly was still in the lineup, Torontto was trying Sandin as the quarterback on PP1. And now, even with Sandin in the lineup, the Maple Leafs still elected to roll out five forwards. All of that makes me believe they won’t revert to their original format.
Even when Rielly returns.
It seems to be a stronger first power play unit without the point shot anyways, so why not use it to your advantage as much as you can? These five forwards have the chance to be very dangerous. Let’s see what they can do with some runway before switching things up again.
Editorials
Recent articles from Nick Barden