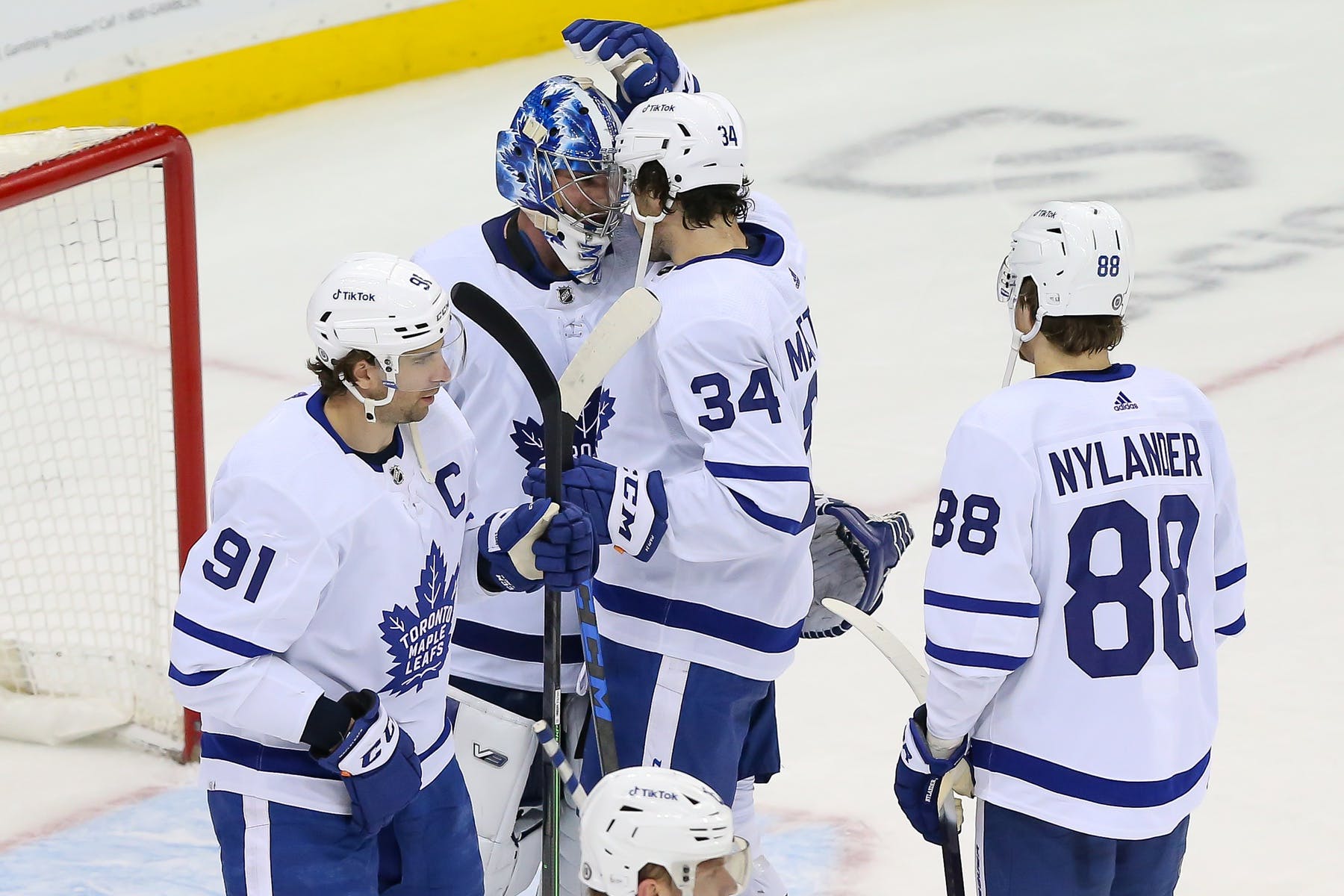 Photo credit:Tom Horak-USA TODAY Sports
10 months ago
NEWARK, N.J. — After his team dug out of yet another hole on Monday night, Toronto Maple Leafs head coach Sheldon Keefe implored his team to bring a more complete effort against the New Jersey Devils when the teams met again on Tuesday.
If not for themselves but for their starting goaltender… Jack Campbell who was chased out of the net after allowing three goals on nine shots.
Keefe got that and then some as his team put up four our of their seven goals on the night in the first period, effectively doing away with the Devils early in a 7-1 victory.
“I thought he was outstanding,” Keefe said of Campbell, who made 31 saves in the win. “I love the way he battled and responded tonight.
Petr Mrazek was originally scheduled to start the second half of the back-to-back after Petr Mrazek played most of Monday’s night’s contest and made 21 saves to pick up the win in relief. But Keefe elected to put his starter back in the net for the final game before the NHL All-Star break.
Campbell admitted that he didn’t lobby to go back in and the decision was Keefe’s alone. And the goaltender was steady, particularly in the second period when defending a 5-on-3 for 1:40.
“I’m grateful the coach put me back in,” Campbell said. “I’m grateful the guys played well in front of me.”
His only blemish in the game was a goal by New Jersey’s Jack Hughes in the third period. At that point, Toronto had opened up a 6-0 lead after two periods and the game was essentially over.
Perhaps equally as important was how the Leafs responded in the game. After several contests in January that featured blown leads or chasing the game while down a pair of goals, the Leafs stormed out of the gate and opened up a 4-0 lead after one period.
Jason Spezza scored the opening goal of the game after Devils goaltender Jon Gillies misplayed the puck. Pierre Engvall found Spezza in the slot for the early 1-0 lead.
Auston Matthews scored his 29th goal and picked up his 50th point of the season with this wrist shot outside the slot that picked off the top corner of New Jersey’s net.
Matthews became the first player in NHL history to begin his career with six consecutive 50-points with the Maple Leafs.
David Kampf and Mitch Marner rounded out the first-period scoring with his first of two on the evening. He finished the game with two goals and two assists and extended his career-high, goal-scoring streak to seven games.
Michael Bunting and Pierre Engvall also scored for the Leafs in a dominating effort and one that ends the unofficial first half of the season on a positive note.
“I think it’s a testament to our resiliency to make sure we get the job done for a whole 60 minutes,” Matthews said.
There have been many performances this season where Campbell has bailed out his team, particularly in November when he produced a save percentage of .959.
“I liked the response of our guys today,” Keefe said of his team. “The guys were really good today and gave you all you can ask for on a night like this.”
Uncategorized