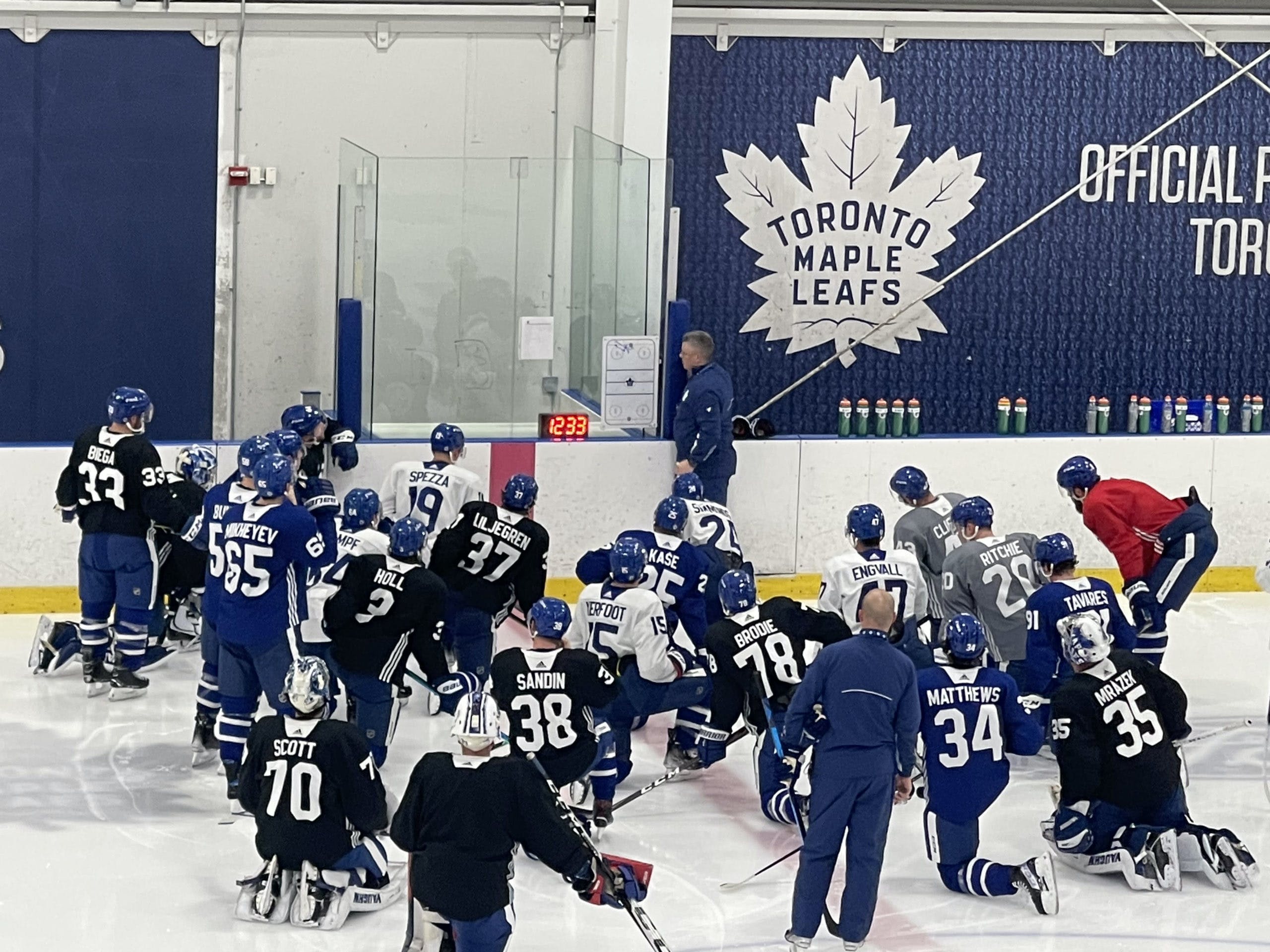 10 months ago
The Toronto Maple Leafs shuffled up their lines at practice Monday. The most notable change saw William Nylander move outside of the club’s top-six group to the third line to skate with Alex Kerfoot and David Kampf.
Adjustments were expected to the forward group with Ondrej Kase coming off COVID-19 protocol over the weekend. Kase skated on the top-line with Auston Matthews and Michael Bunting. Ilya Mikheyev skated on the team’s second line with John Tavares and Mitch Marner. While Pierre Engvall skated with Jason Spezza and Wayne Simmonds.
“I think it’s a good way to spread out the guys on the team,” Nylander said after practice.
Kase skating on the first line is nothing new as the speedy forward occupied the right-wing spot at two different points in the season, Most recently, Kase was skated with Matthews and Bunting while Marner was on COVID-19 protocol.
Why This Is Significant
Nylander has not played outside the top-six this season. Being on a checking line may be a product of the club looking for more balance.
“For me, it’s about having Matthews, Marner and Nylander on three separate lines and getting a look for what that looks like for both our team and how the opposition may look to contend with that.” Maple Leafs head coach Sheldon Keefe said.
Keefe added that the team will practice the same way on Tuesday but stopped short of actually committing to going with these lines when the Maple Leafs host the Anaheim Ducks on Wednesday.
Nylander has 16 goals and 38 points this season and picked up an assist in a 3-1 victory against the New York Islanders on Saturday.
Kerfoot was also moved to the third line with Nylander but that’s not surprising given how much Keefe has attributed him as a stabilizing winger defensively for Nylander.
But if the club goes with these lines for Monday, it’ll be interesting to see how the minutes shake out for that third line.
Leafs address racial incidents in hockey
Before taking questions at practice, Tavares opened up his media availability by addressing two racial incidents that occurred in hockey over the past week.
“I think it’s really important to acknowledge the recognition and steps that have been taken over the last little while to improve in eliminating racism in our game. But obviously, we have a lot of work to do with learning and discussion and how we can continue to apply that and make a difference. Just continue to make our game better and be much more inclusive. So I just thought it was important to acknowledge that today, something we address as a team as well.”
Two days ago, the AHL suspended San Jose Barracuda forward Krystof Hrabik 30 games for making a racial gesture at Tucson Roadrunners forward Boko Imama during a game. That was followed by the ECHL suspending Jacksonville Icemen defenceman Jacob Panetta indefinitely pending a hearing, for an apparent racist gesture toward opponent Jordan Subban of the South Carolina Stingrays during a game on Saturday.
The Icemen have since released Panetta.
Holl Returns
Justin Holl also returned to practice as both he and Kase were in COVID-19 protocol for the same duration. After the initial five-day isolation period, Kase said both he and Holl played tennis in Arizona before getting the go-ahead to join the team in New York this past Thursday.
Holl reclaimed his spot on the right side of the second pair at practice and skated alongside Rasmus Sandin. Timothy Liljegren moved down to the third pair to skate with Travis Dermott.
Muzzin practices
Jake Muzzin practised with the team for approximately 35 minutes before departing early.  The defenceman suffered a concussion stemming from the hit he received in a game by St. Louis Blues forward Klim Kostin against the St. Louis Blues.
Uncategorized