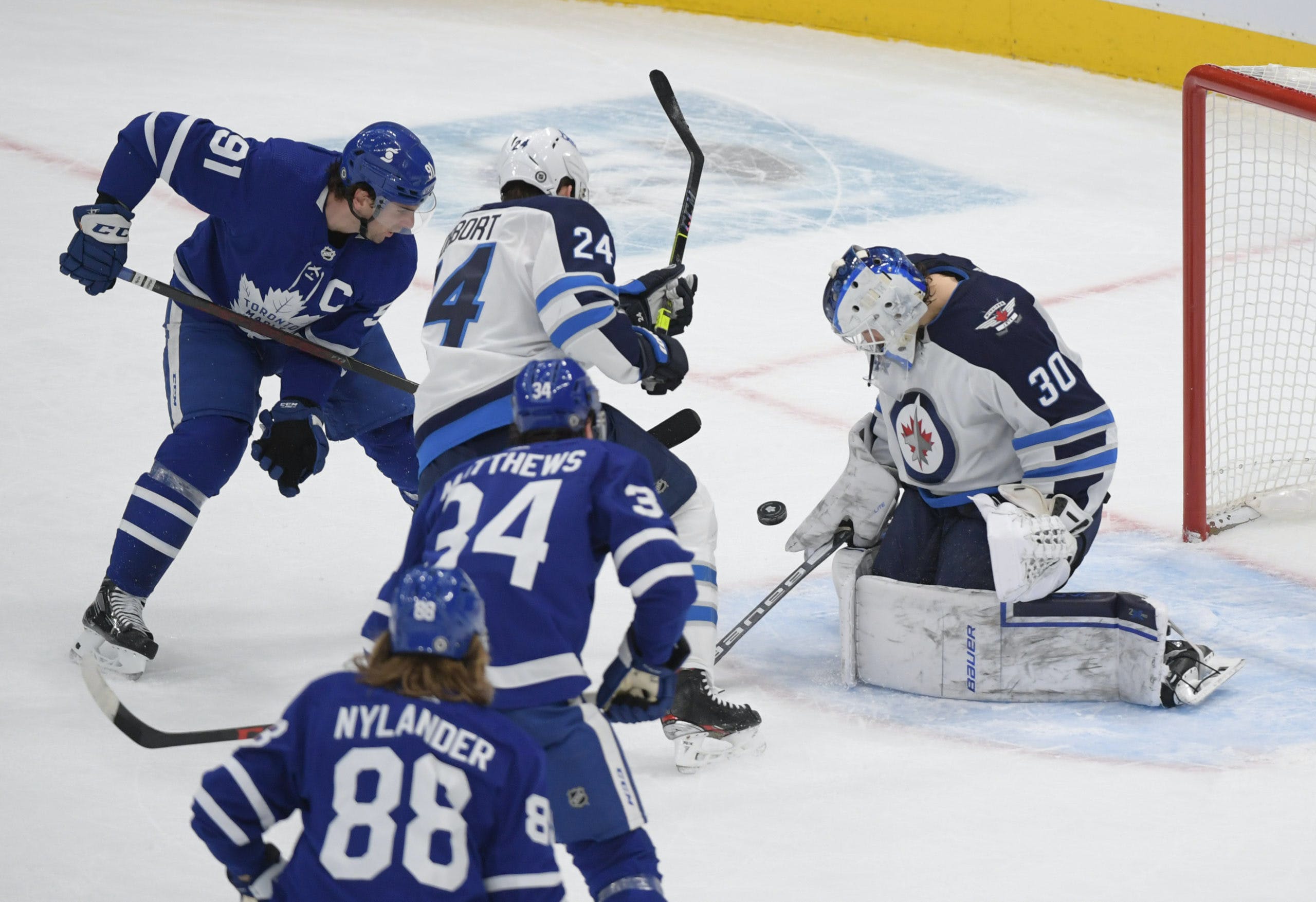 By Nation World HQ
1 year ago
by OddsShark (@OddsShark) – Sponsored Post
The Toronto Maple Leafs are set to move trade deadline acquisition Nick Foligno into their lineup as they look to maintain the road-team trend in the season series with the Winnipeg Jets. The Maple Leafs are -135 away favourites and the Jets are +115 underdogs with a 6.0-goal total on the NHL odds for Thursday at sportsbooks monitored by OddsShark.com.
The Maple Leafs are 5-0 in their last five away games against the Jets, but they are also just 5-6 in their last 11 games as an away favourite at betting sites. The total has gone UNDER six times with two pushes. The away team is 6-2 in the teams’ last eight matchups. The Jets are 11-9 in their last 20 games as the underdog and the total finished UNDER 10 times with two pushes.
Maple Leafs vs Jets | OddsShark Matchup Report
The Maple Leafs are 4-3 (with two overtime wins) against the Jets this season, but Winnipeg has a 13-11 edge in five-on-five goals. Toronto has had difficulty turning its statistical edges in both expected goals-for percentage, or xGF% (60.3), scoring-chances share (58.3) and high-danger chances share (62.9) into results. Head-to-head, Toronto’s power play is two-for-19 and Winnipeg’s is six-for-21. (All advanced stats are based on score- and venue-adjusted five-on-five play.)
The Maple Leafs, who are 28-13-5, are expected to have the gritty Foligno flanking center Auston Matthews and Mitch Marner on a first line that has scored only two goals in the five-on-five phase during Toronto’s five-game losing streak. While Toronto lost 6-3 against the Vancouver Canucks on Tuesday, the John Tavares-Alex Kerfoot-William Nylander second line (listed centre-left-right) was productive, combining for five points and 12 shots on goal. The Maple Leafs are 10-4-1 this season in away games with one day of rest, but maintaining that will be unlikely if they cannot end a three-game run where their goalies have had five-on-five save percentages under .900.
Since March 23, Toronto ranks second in the NHL in xGF% (60.6) but 11th in goals-for percentage, or GF% (56.0). The Maple Leafs are 12th in goals per game (3.00) and 22nd in goals against (3.07). Their power play ranks 29th (8.3 percent) and their penalty killing ranks 27th (74.1).
Jack Campbell, who is 11-2-1 with a 2.24 goals-against average and .919 save percentage, is expected to get the nod in goal. He is rested, but has allowed at least three goals in four consecutive starts.
The Jets, who are 27-15-3, have not played since last Saturday, which can be tricky for a team’s timing and energy. Right wing Blake Wheeler (concussion) will return to his first-line spot alongside Mark Scheifele and left wing Kyle Connor, which could provide a lift to a team that is 4-3-1 in its last eight home games with three or more days of rest. On the second line, center Paul Stastny and left wing Nikolaj Ehlers dominated offensive zone time during Winnipeg’s 5-2 away win over Toronto on April 15 when they had Andrew Copp as their linemate, but Pierre-Luc Dubois will now draw in as the right wing. Ehlers has a team-most five goals against Toronto this season.
Winnipeg is 21st in xGF% (47.2) and third in GF% (61.0) within the past 30 days. During this span, the Jets are 11th in goals per game (3.08 per game) and fourth in goals against (2.15). Their power play ranks fifth (27.3 percent) and their penalty killing ranks 15th (82.6).
Connor Hellebuyck is 21-12-3 with a 2.50 GAA and .919 save percentage. Hellebucyk is 2-2-2 with a 2.49 GAA and .929 save percentage against Toronto this season.
Check out OddsShark on Twitter and Instagram or head to YouTube for analysis on this week’s top games. As well, the OddsShark Computer serves up daily NHL picks for bettors.
Odds News
Recent articles from Nation World HQ