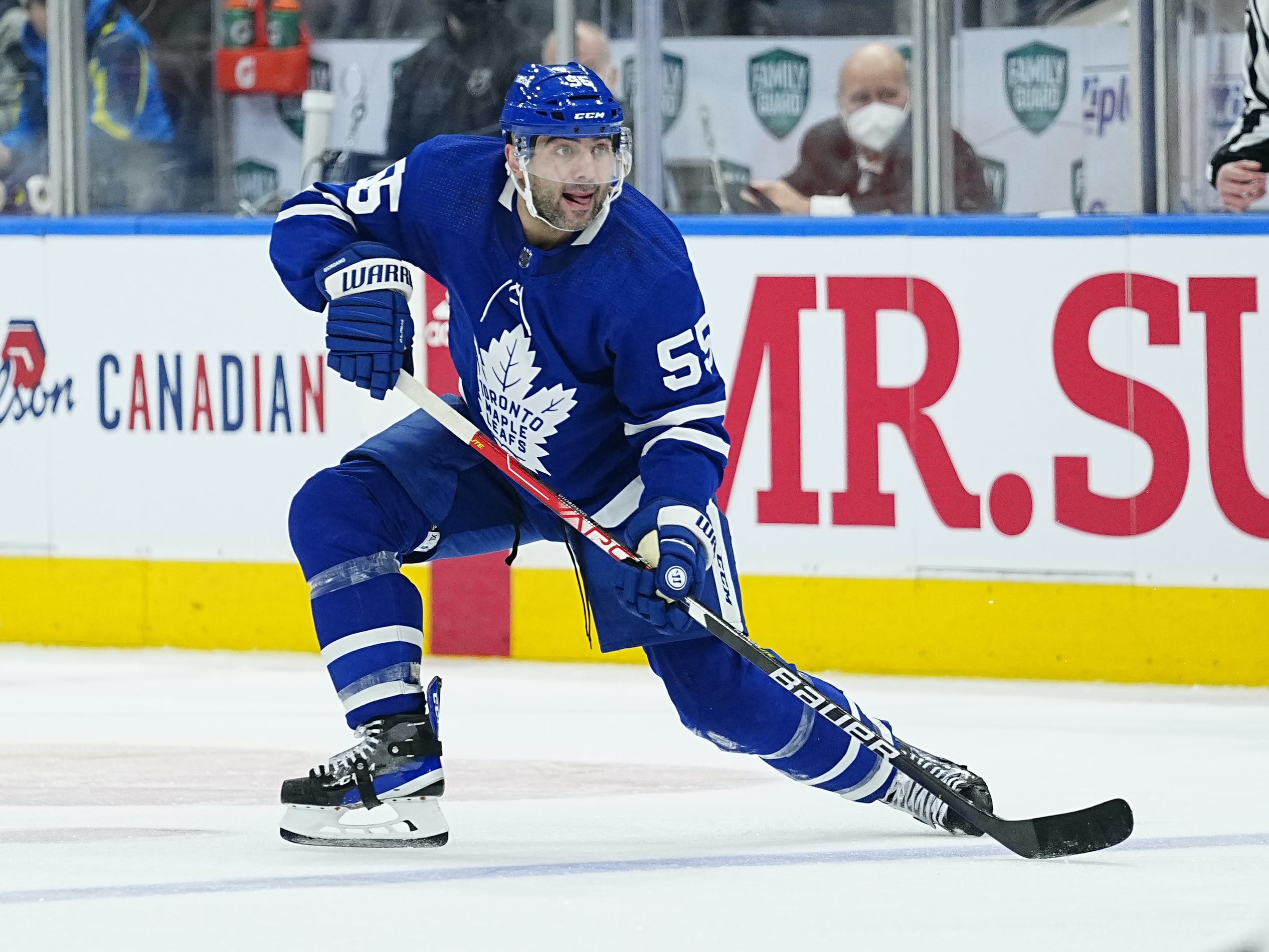 Photo credit:John E. Sokolowski-USA TODAY Sports
9 months ago
TAMPA, Fla. — Jake Muzzin will miss his 20th consecutive game with a concussion when the Toronto Maple Leafs host the Tampa Bay Lightning, but the veteran defenceman will likely return to the lineup either against the Florida Panthers on Tuesday or Dallas Stars on Thursday.
“We’re somewhere in that neighbourhood and we’ll see how it progresses,”  Maple Leafs head coach Sheldon Keefe said following the team’s practice at Amalie Arena on Sunday.
The Maple Leafs brought Muzzin along for the team’s four-game road trip with the intent of getting him back into the lineup. The 33-year-old sustained his second concussion of the season when he was involved in an awkward collision with Montreal Canadiens defenceman Chris Wideman on Feb. 21.
Muzzin practised without a red non-contact jersey for the second time since the club ramped up his conditioning this past week. Now it’s just a matter of where the veteran slots when he does make his return.
The physical defenceman has exclusively skated on the team’s second pair this season with a rotation of different defensive partners. But with the recent upgrades on the back end, highlighted by the acquisition of Mark Giordano on Mar. 20, finding the right spot for Muzzin may be correlated with how well Giordano mixes in with other defensive partners.
“He’s a guy that just puts out fires,” Keefe said of Giordano’s play with the Leafs. “And he seems to be in the right spot to recover.”
In the six games that Giordano has played with the Leafs, the 38-year-old has performed as advertised. With the exception of Saturday’s 6-3 win against the Philadelphia Flyers where everyone not named Jack Campbell played poorly, Giordano has been effective in limiting the amount of time in the team’s defensive zone.
Giordano currently leads the Leafs in expected-goals percentage (64.59).
“He’s obviously got a good sense of who he is,” Maple Leafs captain John Tavares said. “I don’t think he’s trying to come in and do something extra special than just be himself and what’s made him successful.”
When the Leafs acquired Giordano, Keefe said they would try out different combinations between now and the end of the regular season, but with injuries to defencemen like Muzzin and Rasmus Sandin (knee), Giordano has played all but one of his six games alongside Timothy Liljegren.
The other game saw Giordano skate on the second pair with Justin Holl as a result of Ilya Lyubushkin’s one-game absence with a neck injury.
“We have to be prepared for anything,” Giordano said. “I have some familiarity there with Brodes (TJ Brodie, his teammate of ten seasons with the Calgary Flames), the big thing for me when you play with a new partner is that there is communication.”
Muzzin’s underlying stats were beginning to show signs of regressing before his concussion issues this season. His 51.12 per cent Corsi at even strength is the worst among Leafs defencemen this season. With Giordano capable of slotting into the mid-pair, it’s could be time to let Muzzin ease is way back with some different assignments by moving him down to the team’s bottom pair.
Liljegren has seen a boost in his game with Giordano and maybe he joins in a second-pair role with him.
Muzzin hasn’t been ever been demoted to the team’s third pair since the club acquired him on Jan. 28, 2019. But he didn’t have a former Norris Trophy winner on the Leafs depth chart until a couple of weeks ago.
Some time on the third pair could be the dip-your-toes-in-the-water moment Muzzin needs to allow the time necessary to get his game back and the addition of Giordano is the reason they can do it.
News