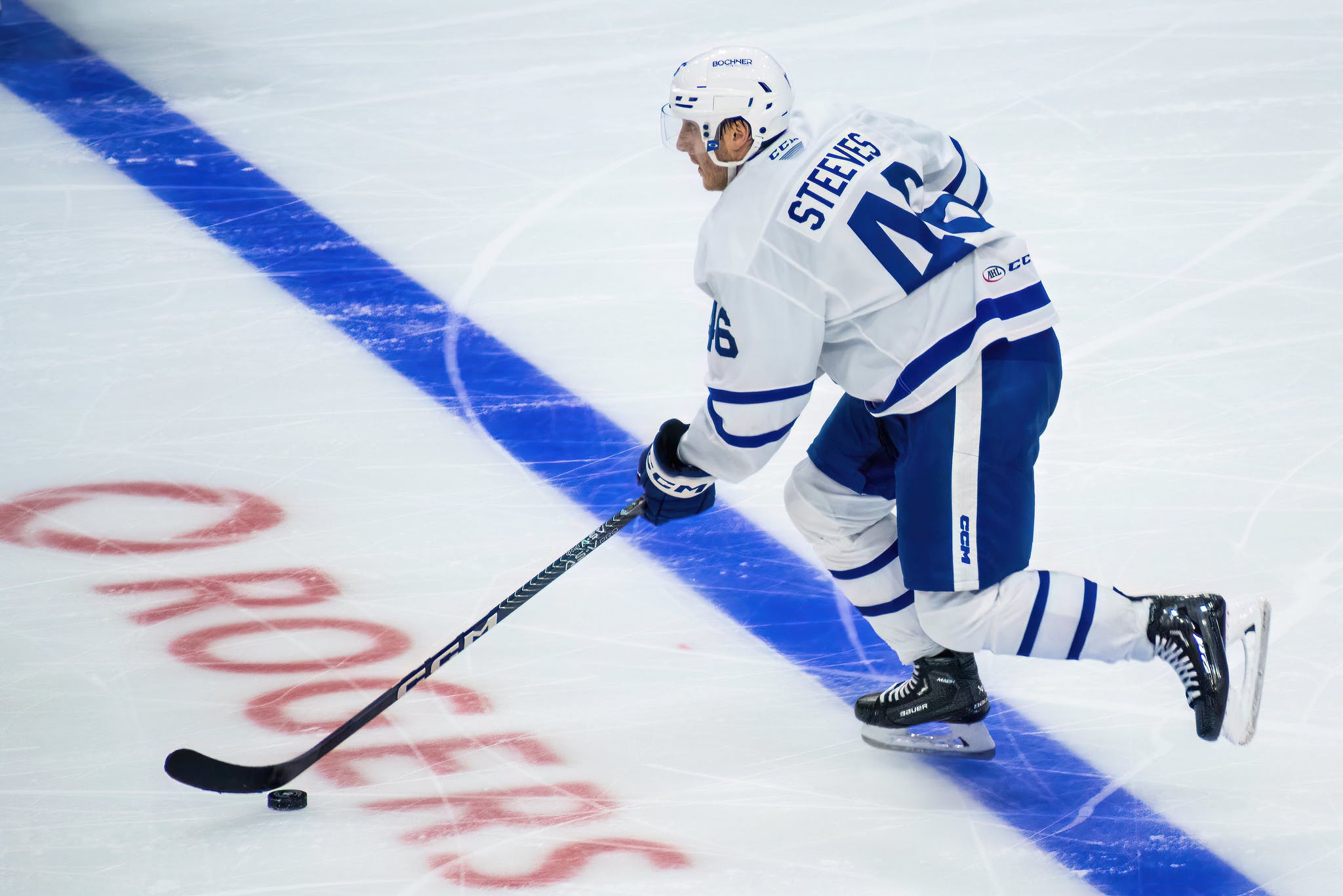 By Nick Barden
22 days ago
It’s usually one step at a time, but this Toronto Marlies team seems to be taking a huge leap forward.
After what was a rather difficult season last year for the Maple Leafs’ AHL affiliate, there seemed to be a glimmer of strong play coming.
Toronto — following their first 10 games of the season — sit in atop the North Division with an 8-2-0-0 record. An incredible start from a team that had some question marks on defence to begin the season.
“I think it’s obvious, if you look at our results, you can see that we’re starting to have a good start,” said Marlies head coach Greg Moore on Monday. “If we’re looking at our process internally, there’s some games we feel like we could’ve played better, had more consistency, but overall this group has been really impressive with how quickly they’ve come together and the work that they’ve been able to do so far.”

The biggest add of the off-season might just be Logan Shaw, who’s proved to be incredibly important early on. The 30-year-old has began the season on fire, scoring 14 points in his first 10 games, while also being a huge leader within the dressing room and on the ice.
“I think the obvious thing everyone sees is his play on the ice,” Moore said earlier this season. “But what people don’t see is his demeanour, his energy, his leadership, his personality. He’s just a really steady person who knows what to say at the right times and what’s needed for the group, and we’re very fortunate to have him this year.”
As the season grows older, the captain discussion might heat up. And early on, he’s my bet to get the ‘C’ stamped on his chest for this Marlies team.

Alex Steeves adding another dimension to his game

There are a lot of Maple Leafs prospects down with the Marlies this season, but the one who might fascinate me the most is Alex Steeves.
When the 22-year-old entered his first professional season last year, he did so with very high expectations. Last season’s Marlies team was dealt speed bumps all year long, though it never seemed to slow Steeves.
Scoring 46 points (23G, 23A) in 58 AHL games during his rookie season was a great accomplishment and that shouldn’t be understated. The 22-year-old also made his NHL debut — which because of his play — made him that more exciting as a prospect.
In 10 games this season, Steeves has 13 points (5G, 8A) and is making the conscious decision to add more to his game. There’s already a lot that Steeves has in his brief case, but the 22-year-old wants to be able to add to that.
“I think I’m making an extra effort to play physical.” Steeves said on Monday after Marlies practice. “I think that’s going to be a big factor for me moving forward, trying to make the jump to the other league. So, trying to be physical, skate on pucks, use my feet more, my speed. That’s all I can really control, so I think that’s the biggest difference.”
As you can see, Steeves added this element to his game last season. But this time around, it seems like he’s trying to take it to another level.

Keith Petruzzelli and the NHL contract

The best feel-good story early on has to be Keith Petruzzelli getting an NHL contract and immediately going up to the Maple Leafs after Ilya Samsonov was injured this past weekend.
“It was very special.” Petruzzelli told Marlies play-by-play commentator, Todd Crocker, with a huge smile shortly after it happened.
This was a big moment for the 23-year-old netminder, who’s put in an incredible amount of work throughout the last two years. The best part about this video is the fact that Petruzzelli didn’t sign the contract before this announcement.
He had no idea it was coming, which made his reaction that much sweeter.
“It’s pretty cool how they did that,” Steeves said on Monday. “I don’t think anyone was really surprised. Guys were starting to wonder, you know, there’s 31 other teams in the NHL who could offer and guys were starting to get a little worrisome that Keith might be getting scouted, but obviously Toronto did the right thing and jumped all over him.
“He’s such a great guy, honestly. Kind of the ideal personality for a goalie. He’s just confident, calm, collected, does his thing out there, so we’re all super happy for him. It couldn’t have happened to a better guy.”
It was a special moment for Moore, too, who’s seen plenty of players throughout the last two seasons go up to the Maple Leafs and accomplish their dream.
“Elation.” Said Moore describing how it felt as a coach and a person in that moment. “Good people working hard, getting rewarded. It’s what fulfills, personally myself, to love what I do and watch these guys chase their dreams. And for Keith to sign an NHL contract, and get to put on the sweater, special moment for him, and just a fun day for us to watch that happen.”
Editorials
Recent articles from Nick Barden